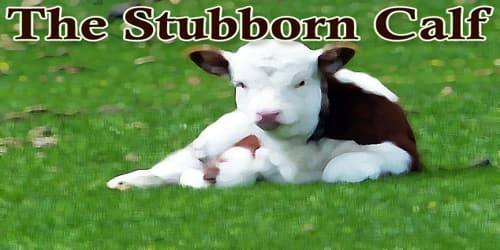 Once upon a time, a woman decided she would buy a calf as a surprise for her son. So she sent him to school and set off for the market. There, with all the coins she had, she bought a milk-white calf.

She turned for home, leading her calf behind her. As she walked, she dreamed of the money they would earn with the milk provided by their cow, and she imagined great wealth and happiness. She hoped her son would be grateful.
As she crossed a field, the woman came to a ditch. The calf refused to jump. The woman pushed and pulled, but the calf would not budge.

The grocer shook his head. “I won’t do that,” he said. “Neither forest nor woodcutter has caused me any harm.”
“I’ll show you,” she cried, and she ran through the back alleys of the village until she came to a group of thieves. “I want you to rob the grocer’s shop,” she said to the thieves. “He refused to give me matches to burn the forest to punish the woodcutter who will not give me a stick to beat the dog who will not bite my calf who will not leap the ditch.”

“Oh no,” the thieves said. “We don’t steal on someone else’s whim.”
“I’ll show you too,” the woman said, shaking her fist. She ran until she came to the watchtower. She climbed the stairs and, breathless, said to the watchman, “There are thieves in that alley there,” and she pointed. “Arrest them. They refused to rob the grocer who will not give me matches to burn the forest to punish the woodcutter who will not give me a stick to beat the dog who will not bite my calf who will not leap the ditch.”
The watchman laughed. “I can’t arrest someone for not committing a crime.”
The woman ran to the chief justice. “I demand justice,” she said. “I need your help.”
“Explain,” the chief justice said calmly.

“Sir, I bought a calf today, but when we came to a ditch, she would not leap it, and so I looked around and saw a dog, and I told the dog to bite the calf to make her jump over the ditch. But the dog would not bite the calf, so I asked the woodcutter for a stick to beat the dog to make him bite the calf, but the woodcutter would give me no stick. So I asked a grocer for some matches to set fire to the forest, but the grocer refused, so I asked some thieves to rob the grocer’s shop, but they would do nothing at all. And so I ran to the watchman and asked him to arrest the thieves, and even he refused. And so I have come to you to state my case, good sir. Tell me, please, what I should do to make my calf jump the ditch?”

“Here’s a stick to beat the dog,” he told the woman, and she returned to the dog, stick in hand.
When the dog saw that she would hit him with a stick, he raced to bite the calf, but the calf, sensing danger, quickly leaped over the ditch.
And the woman led her calf home.
There she was grooming the calf when her son returned from school.
“Ah, mother,” he said, “so you have bought a calf.”
“Is that all you can say?” the woman cried, and she told him her tale. “From now on,” she added, “you will take care of the calf yourself. I’m tired.”
The boy decided it would not be wise to argue with his mother. After all, she was quite a clever woman!