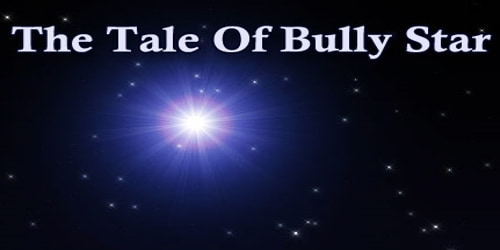 The Tale Of Bully Star

A long time ago the sky rippled with stars, so many that there seemed to be not enough room for all of them. When they twirled, sometimes their tips touched. Sparks flew, and other stars were born, and some died. But the sky was so full, some of the stars headed toward Earth. They landed in the deep, blue sea, and there they became starfish.

Back in the sky, one star, Bully Star, a big, flashy fellow, wanted more room for himself.

“Go to the sea, if you’re unhappy,” the other stars told him. But he believed that he owned the sky, and so each night he flipped and flew across the sky, bumping into other stars, pushing them out of his way, smashing into smaller stars, and sending the tiniest ones tumbling toward Earth.

“Don’t push,” the stars called. “Don’t be cruel. We all deserve a place in the sky.”

But Bully Star cared only for his own comfort, and so he went on bumping and bruising and bullying. “Out of my way,” he called to any star who dared to block his path.

Then one night, as Bully Star was frolicking, he lost control of his tumbling. Unable to control his path, losing sight of the moon, he began to fall. “Help,” he cried. “Help me, someone,” but instead of offering help, the other stars twinkled and winked. “Serves him right,” they said as Bully Star tumbled and fell.

Down, down, down he went, right into the sea. “Glub, glub, glub,” he gasped as he felt his arms turn soft, his belly to jelly, his bright light blunted to a soft, quiet hue. “Glub, glub, glub,” he sputtered. He felt afraid for the first time in his life. Down there, beneath the water that looked so bright blue from above, the world was dark and forbidding. Slithery things swept past, and Bully Star felt lost and alone. He suddenly missed his companions.

A moment later a force, something as strong as anything Bully Star had ever felt, rushed against him and hurtled him, over and over and over again. Before he knew what had happened, his head was spinning, and he lay, breathless and salty with tears and seawater, upon a sandy shore. He choked and his body trembled. He coughed, and water spilled from his mouth. He sniffed and could smell something achingly sweet. When he opened his salt-filled eyes, he saw hovering above him a beautiful creature, with wings the color of the sky’s rainbows, with a body as soft and curving as the clouds.

“Who are you?” Bully Star asked. His voice sounded like someone else’s voice, without its strength and authority. His voice was a whisper, a tiny star’s voice. He tried again. “Tell me who you are. At once. And what exactly is this awful place?” He raised an aching arm. “I belong up there. I belong in the sky with my kind.”

The butterfly, for that, was what the creature was, whispered back. “I am a butterfly, and you are lying on my beach in Barbados.”

“That is the oleander, and the sea, and the palms, and all our perfumes combined. It’s a beautiful world, this world of ours.”

“How?” Bully cried, rigid after hearing her words. “How? Tell me how.”

“Well, I’m afraid you don’t really belong there,” she said sadly. “The sky, you see, is peaceful and kind. The sky watches over all Earth’s creatures. The sky is our blanket and filled with those who want only to give us light. You don’t care about us, or anyone. You seem only to care about yourself.” The butterfly fluttered as if to fly away.

“Wait!” Bully Star called, and suddenly, at that moment, he felt in his heart that what she said was true. The moon and the sun and all the other stars, the clouds, and the comets were kind. He had no right to be this way, to be this selfish, bullying fellow. “Butterfly, please come back,” he cried. “I was wrong. I’ve been cruel.”

When the butterfly heard Bully’s voice, she heard the light in it. She felt the song of the stars. She flew back and hovered above him. “How can you prove you’ve changed?” she asked softly.

Bully Star began to cry. “I can’t prove anything,” he said, and he looked with longing at the early evening star rising above him. “I’m just another star. I’ve nothing to prove. I only want the other stars to know how sorry I am. I never meant to bully them. I’m so sorry.”

The butterfly smiled and swept close to his face. Then she kissed the weeping Bully Star. She kissed him so softly, so purely, so sweetly, that Bully Star felt his eyes, his heart, his whole body, and mind filled with light. And one moment later he was drifting higher and higher, above the oleander, above the palms, above the sea, up, up, up to the sky.

Back home he was no longer Bully Star. From that day on he was not only the brightest but also the kindest star in the sky.