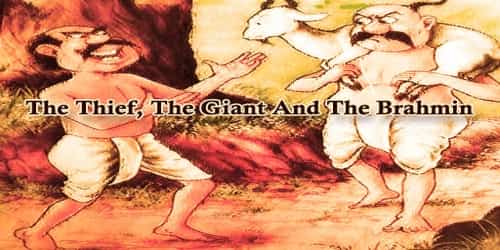 The Thief, The Giant And The Brahmin

Long ago, there lived a poor Brahmin in a village. He used to perform poojas in the nearby villages to earn his living. Once a rich farmer gave him a cow and told him to sell cow’s milk in the market to earn part of his livelihood. But the cow was very weak. The Brahmin then begged for alms and fed the cow. Soon the cow became fat and healthy.

Once a thief saw the fat cow of the Brahmin and decided to steal it. One night he headed towards the Brahmin’s house.

A giant also used to live somewhere near the village. He devoured human beings. The thief met this giant, while he was on his way to Brahmin’s house to steal his cow. The thief asked the name of the giant. The giant replied, “I am Maha rakshasa. I eat humans. Today I’m going to devour the Brahmin. But who’re you by the way?”

“I am a big thief. I steal whatever I like. Today, I’ve decided to steal the Brahmin’s cow.”

“Come on, then!” said Maha rakshasa. “Let’s go together to the Brahmin’s house.”

So, both of them reached the Brahmin’s house together. The Brahmin was deep asleep at that time. The thief whipped out a big knife from his pocket and started walking to the place, where the cow was tethered. But the giant blocked his way.

“No!” said the thief. “It’s quite possible that while you go to eat the Brahmin, he wakes up and runs away. In that case, there might be quite a commotion here and as a result, neither you’ll get your Brahmin nor will I get my cow.”

And thus, both of them started having a heated argument between them. The loud arguments woke up the Brahmin. He soon realized the whole situation. He recited mantras and burned the Maha rakshasa with his spiritual powers. Then he started beating the thief with a long and thick stick. The thief began to cry and ran to save his life. Thus, the Brahman was saved from the giant, as well as, from the thief.