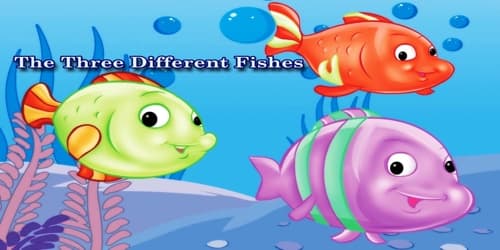 Three fishes lived together in a lake. Although the three were together, all of them are very unique. They had contrasting characters and argue over small things. Still, they were happy. The three were grownup into a bigger fish. The first fish always dwell in the past and very lazy. The fish doesn’t believe in preparing for the future. If you can find something that is quite opposite to the phrase, ‘Prevention is better than cure’ it could be the first fish! The second fish lives for the present. It is a little bit wise and tends to make some good decisions in the last minute. The third fish is an intelligent one. It usually thinks a lot, makes the decision wisely and always carry smart and interesting ideas, suggestions and plans to live happily and safely.

One day, as the three were playing in the lake, the third fish heard two fishermen talking about fishing. The fish called the other two fishes to hear what they speak.

The first man told, ‘I heard about this take. It has some big fishes, why can’t we enjoy our time here?’

The second man replied, ‘Yeah that’s a good idea. I love to cook and eat fresh fish. We’ll make it tomorrow noon here!’ And they left.

The third fish told the other two fishes, ‘see they are planning to catch out us. We should go to some other place to live safely. I already found a route that will take us to the nearby canal and we may then reach a new lake.’

The second fish told, ‘Yeah I too heard them. But they may not return or may end up fishing at a distant place. We can think about it tomorrow when we see them.’

The first fish, ‘Oh let’s just ignore it. Let us have some rest now!’

The third fish, the intelligent one, moved to the nearby lake through the secret way alone as the other two fishes denied accompanying.

Next day, the two fishermen arrived. The second fish saw them at fishing and planned for an escape. As it was caught in the fishing net, it acted dead. The fishermen threw it back into the lake and the second one was escaped. The first fish, the lazy one had no idea about the presence of the fishermen. Very soon it was caught and before it could think about how to escape, he was put into the basket and lost the life in a few minutes.