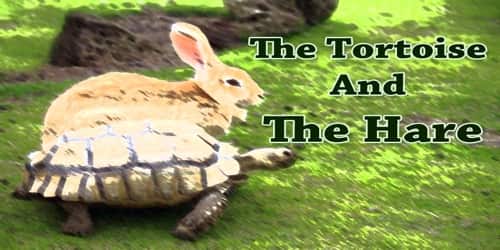 The Tortoise And The Hare

One morning in Africa, the tortoise sat by a watering hole. She was resting peacefully when she heard the pattering of feet nearby.

“Morning!” called Larato the hare, leaping to Thabiso’s side. “So sorry to disturb you, Thabiso, but I’ve come for a drink.”

Thabiso could see the hare was in a mischievous mood, for her mouth and whiskers twitched as she spoke. “What else do you want?” Thabiso asked sleepily.

Larato’s whiskers twitched again. “Well,” she said, “I only wondered how you can possibly run on those funny little legs of yours.” She raised herself on her haunches and stretched out her long legs. “With mine,” she said, “no one can catch me. I feel so sorry for you, Thabiso, with those stubby legs.”

“My legs suit me fine,” said Thabiso grumpily. “Besides, your long legs could never carry my beautiful shell.”

Now Thabiso was annoyed. “I am sure your long legs could never win a race against me,” she said.

Larato rolled on the ground and squealed with laughter. “The very thought,” she gasped, “that Thabiso the tortoise could win a race against Larato the hare. Fine, let us race, and if you beat me, I shall give you the finest gift you’ve ever owned.”

Thabiso thought for a while. “Agreed,” she said. “We’ll race from this watering hole to Amelia’s pan on the far side of the mountain. We’ll start at sunrise tomorrow, for today I need my rest. If you’ll be kind enough, please go away.”

“I can hardly wait!” Larato cried, and her legs twitched with anticipation. “See you tomorrow, then,” and off she ran.

As soon as Larato was out of sight, Thabiso trundled through the bush, sending out messages to all her relatives. To each, she explained her race plan. By afternoon, all the tortoises for miles around knew about the race and the parts they would play.

Satisfied, Thabiso trudged into the bush to fetch a gourd. This she carried all the way to the broad, shallow waterhole that everyone called Amelia’s pan, arriving there as the sun began to set. She filled the gourd with water and settled down to wait.

At sunrise, the next morning, the tortoise and the hare met at the starting place. “Morning, Thabiso,” Larato said cheerfully. The tortoise nodded hello. What Larato did not know was that this was Thabiso’s cousin, not Thabiso the tortoise. Thabiso and her cousins looked almost exactly alike.

They wished each other well, and with a bang, the race began.

Larato bounded over the first rise, filled with vigor and joy, but suddenly she saw an unbelievable sight. There, plodding ahead of her, hurried the tortoise. “How did she do that?” Larato panted, picking up speed. A moment later she passed the slow tortoise. This, of course, was another of Thabiso’s cousins, but Larato did not notice.

Soon Larato trotted over the second rise, but once again she was amazed to see, far ahead of her, the tortoise walking steadily along. “Has Thabiso learned to fly?” she asked herself. She picked up her pace and raced past the tortoise. “Ha!” she cried delightedly. “Maybe I can fly!”

On Larato ran, and ran, and ran. The day was hot, and Amelia’s pan seemed far away. Larato began to feel thirsty as she came upon the last rise. And then she spied the tortoise once again ahead of her. “What is going on?” she cried out loud. She was tired, thirsty and confused.

Larato’s head spun and her legs ached. For a moment she thought she might faint.

But then she got a burst of energy, for she could see Amelia’s pan not far away. She kicked up her long legs and raced toward the finish, breathing heavily, her throat hot and dry. She ran so fast that near the finish line, she tripped and fell. “Oh my,” she gasped. She staggered to her feet and tried to run again.

Just then she saw, coming toward her from Amelia’s pan, the tortoise Thabiso. The tortoise was carrying a gourd full of water.

Larato fell to the ground and groaned. “What?” she cried, but Thabiso slowly walked to her side and sprinkled her with cool water. “Ahh,” Larato sighed as she cooled. “Thank you, Thabiso. I thought I might die of exhaustion.”

“It’s nothing,” said Thabiso. “I would do this for any friend.”

“You won the race,” Larato said sadly. “I’ll never tease you about those legs again. I owe you a gift.”

“Never mind,” said Thabiso. “Your friendship matters more to me than any gift could.”

The two became good friends after that, and they never again raced.