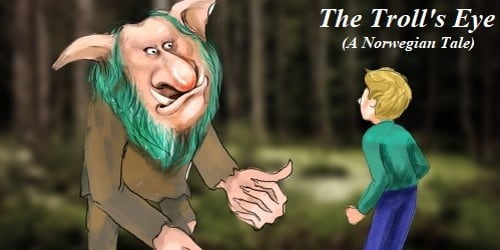 The Troll’s Eye (A Norwegian Tale)

Once upon a time three boys named Jon, Ole, and Tor lived with their mother at the edge of a great forest in Norway. The family was poor, but they worked hard and enjoyed each other’s company. The mother told her sons that someday their labor and good nature would bring them a fortune.

One day Tor ran, breathless and pale, into their cottage. “Mother,” he cried, “the children at school say that the forest near our home is filled with trolls. Are we in danger? Will the trolls harm us?”

Tor’s mother laughed and tousled her son’s hair. “People have always told tales,” she said, “but you needn’t be afraid. If you’re a good boy and you work hard and you’re always generous and kind, everything will be all right.”

Time passed, and Tor forgot his fears until the day his mother asked the boys to go to a neighboring farmer’s house to trade some fresh milk for the neighbor’s eggs. “And on your way home,” she said, “please collect some wood in the forest for our fire.”

“But Mother,” Tor said, “if we’re in the forest after dark, the trolls may find us.”

Jon and Ole laughed, for they did not believe in trolls.

“Don’t worry,” their mother told Tor. “If you hurry, you’ll be home long before dark.”

So the three boys set off. They reached the neighbor’s farm by noon and were about to return home when the farmer’s wife, a friendly woman, offered them some freshly baked cake.

“We must be home before dark,” Jon reminded his brothers, but when Tor saw the sweet cake sitting on the table, he begged his brother, “Please, Jon, you know how much Ole and I love cake. It surely won’t hurt to stay a while.”

Well, Jon loved the cake, too, and so the boys stayed and ate big slices of freshly baked cake and drank large glasses of milk, and they laughed and talked with the farmer and his wife until the day grew late. Then they quickly collected their eggs and started home.

When they reached the middle of the forest, Tor turned to his brothers and said, “Let’s run. It’s getting late and Mother will be worried.”

The boys began to run, but just then they heard rumbling in the distance.

“Shh, what’s that?” Jon said. The boys stopped and listened. They heard a loud crash, and then another, and another.

The sun began to dip behind the hills and darkness fell over the forest. The boys started to run again, but now the rumbling and crashing drew closer.

Jon shrieked when he turned and saw what was making the sounds. “Look out!” he cried to his brothers, for a gigantic tree trunk was moving toward them, breaking branches as it moved, snapping twigs.

The boys froze in their tracks, and the moving tree stopped before them.

Trembling, the boys looked up, and up, and up. Their mouths fell open when they saw this was no tree. The trunk was a leg, and way above the leg, they saw the forest troll’s head.

The troll took one step forward, and the boys jumped back, but the troll banged right into a fir tree and broke off two branches. “Can’t you see?” Ole asked, without thinking.

“No,” the troll wept. “As you know, we trolls have only one eye, and I’ve lost mine. It fell when I was trying to clean it.”

When the boys heard this, they felt sorry for the troll. “We’ll help you,” they said and began to search for the eye. At last, Tor found a shining ball the size of an ostrich egg underneath a bush. “I’ve found it,” he called, but the eye was so heavy, he needed his brothers’ help to lift it.

Together the boys carried it back to where the troll worriedly rocked back and forth.

“Here you are,” they called to him, and they had never seen a creature so happy as that troll. “Oh, thank you,” he cried as he lifted his eye and fitted it into his head. Then he looked down at them and smiled and said, “You are the three kindest boys I’ve ever known. Climb on my shoulder and I’ll take you home.”

The boys happily climbed up the troll’s legs just the way they might climb a tree, and in a few minutes, they were home. They clambered to the ground, but when they turned around to say goodbye, the troll was gone.

The boys rushed into the house to tell their mother all that had happened.

“So a troll brought you home?” she laughed, but she did not believe them.

In the morning, when they all went to the woodshed to collect wood, they found a sack on either side of the door. Tied to the outside was a note: “Thank you for finding my eye.”

The boys quickly opened the sacks. From one flowed a stream of silver, from the other a river of gold.

“You were right, Mother,” Tor cried. “Kindness is rewarded. And I’ll never fear the trolls again.”

And they lived happily ever after.