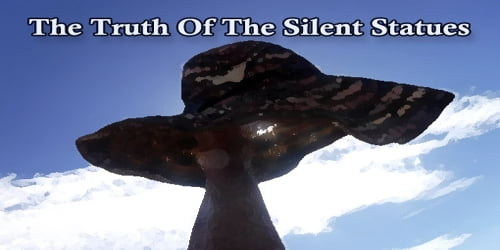 The Truth Of The Silent Statues

One day a farmer walked happily along the country paths carrying rolls of silk upon his back, each roll held fast with his own wax seal. He smiled, for he was pleased with his harvest. He knew he would fetch a good price for all his work and he planned to feast and celebrate that night. As he walked, he daydreamed of the evening before him.

The load was quite heavy and the sun was hot, and he grew weary. When he spotted a sturdy tree by the roadside, a tree that stood between two tall stone statues, he decided to stop to rest awhile. He laid his rolls of silk beside the tree, and then he lay down beside these. Soon he was fast asleep.

When he awoke, he stretched and yawned, but suddenly he realized his silk was gone. His dreams turned to mist, and he began to weep.

At last, he realized he would gain nothing by sitting there lamenting his loss. He must report his loss to the magistrate’s court; the magistrate was known to be very wise, and he would surely help to find the thief. The farmer got up and ran toward the village.

The farmer stood before the magistrate and told his tale. “I lay beneath a tree at the crossroads just a few miles from the village,” he said. “And when I awoke, my silk was gone.”

The magistrate nodded. “And did you see anyone nearby when you went to sleep?”

“No one,” said the farmer, “there were only two stone statues by the side of the road, and everyone knows a statue cannot steal.”

To the farmer’s astonishment, the magistrate called to his aides. “Bring those statues to me,” he demanded. “We’ll hear what they have to say.”

The crowd was stunned. “Has the magistrate lost his mind?” they whispered, for they had never heard him speak so foolishly. “What on earth will he learn from the statues?” they asked. And on they gossiped and muttered until the aides returned with the statues.

The aides placed the statues on the bench before the magistrate. Now the magistrate, in his solemn voice, began to ask questions. The farmer stared in disbelief.

“Did either of you see a thief?” the magistrate asked. “Answer honestly, for we know someone stole the silk, and I demand to hear the truth.”

“What can he be thinking?” the crowd whispered to one another. “Has our magistrate lost his mind altogether?” But the magistrate stared sternly at the silent statues, awaiting their reply.

At last, the magistrate called again to his aides. “Bring your canes!” he said. “And give each of these statues 50 lashes for refusing to answer.”

At this the farmer was silent, but the crowd burst into laughter.

“Contempt!” the magistrate declared, pointing at each person in the crowd. “For your insolence, each of you is ordered to bring me a roll of silk before sunset. Anyone who disobeys this command will be lashed.”

The crowd could not believe their ears. The farmer tried to speak, but the magistrate silenced him. “That is my order! Now go. All of you! Be back by sunset with your silk.”

One by one the people walked out of the courtroom, shaking their heads. Still, they knew that they must obey the command. The magistrate made the laws, and if they refused to do as he bid, they would be punished. And so they went to the market to buy rolls of silk.

At sunset, the magistrate again called the court to order, and each of the observers appeared. Each one carried a roll of silk, and these they laid before the magistrate. When the farmer saw the silk he gasped, for he recognized many rolls as his own.

“These are mine!” he said, surprised at the sight.

“Of course they are,” said the magistrate calmly. And then he turned to each person in the crowd and asked them where they had purchased their silk.

One by one the people told their tales. They had rushed to the market, but there was no silk to be found. The shopkeeper’s stall was empty. The people began to grumble and complain, and at last the shopkeeper whispered, “Come to my home.” There, hidden behind a screen, lay many rolls of silk. “I will sell you each a roll, but you must pay double,” the shopkeeper had said. “This is rare silk, and it was hard to find.” And so each of the villagers had purchased, for a high price, a roll of silk to bring to court.

The magistrate nodded as he listened to their tales. “Now we know who the thief is, thanks to our silent statues.” He ordered his aides to fetch the greedy shopkeeper, and when the man stood before him, the magistrate once again spoke.

“You are hereby sentenced to pay the farmer for his silk, and you will work for him for five years. That will be the punishment for your crime.”

So the farmer reaped not only money but also a helping hand, and he always spoke with great admiration of the magistrate who was, though he had once seemed foolish, very wise indeed.