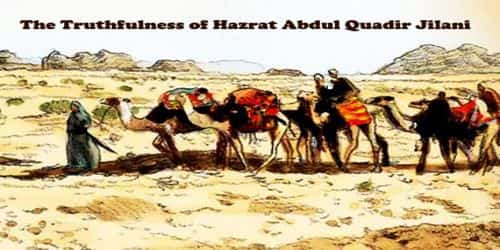 In his boyhood, Hazrat Abdul Quadir Jilani was going to Bagdad for education. On the eve of his departure from home, his mother said to him, “My son, never tell a lie and don’t get frightened in danger.” Bagdad was Jar away from his home. He began his journey in the company of a band of merchants. The way was infested with robbers. After five days a gang of robbers fell upon the travelers. One of the robbers caught hold of the boy. The gang leader saw it and said, “Let the boy go. He has nothing with him.” At this, the boy said, “No, you are wrong. I have forty gold coins sewn in my sleeves.”

The leader asked him why he told them about his gold coins. The boy said in reply that at the time of his departure his mother forbade him to tell a lie. He could not disobey his mother. Hearing this, a change came into the gang leader. He gave up robbery with all his men. They began to lead a good and honest life. Being inspired by the truthful boy, they became good men. They decided to reform themselves and gradually gave up all their bad habits.