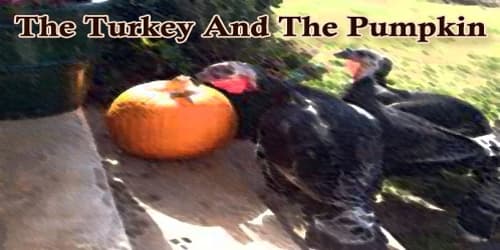 The Turkey And The Pumpkin

One crisp autumn morning a turkey named Oscar escaped from his farm. Thanksgiving was just weeks away and Oscar knew that his only hope for survival was to reach the petting zoo in Belvar.

After crossing a large hill on his journey, Oscar came across a pumpkin patch that stretched as far as the eye could see. Suddenly a voice shouted out, “Thank goodness someone’s finally come for me.”

The voice startled Oscar, but he didn’t see anyone. “Who’s there?” asked Oscar nervously.

“Down here,” said a little pumpkin in the patch. “I didn’t mean to scare you, it’s just that Halloween is only two days away, and I was starting to think nobody was ever going to come for me.”

“Well, I am just passing through. Who are you waiting for?” asked Oscar.

Oscar was puzzled by the little pumpkin’s remark and asked, “What exactly are you waiting for?”

“A home,” replied the little pumpkin.

“But isn’t the patch your home?”

“Yes, it is, but being picked as a jack-o’-lantern for Halloween is every pumpkin’s dream.”

“Unbelievable, I’m trying to reach the petting zoo in Belvar to avoid being carved, and that’s what you’re wishing for,” said Oscar.

“I’ve heard of that place,” said the little pumpkin. “Wait for a second, will you take me there with you?”

“Zoos are for animals,” said Oscar. “Not pumpkins.”

“That may be true, but think of all the kids that will get to see me glow. Please take me with you?” pleaded the little pumpkin.

As Oscar shook his head no he looked down and saw a tear roll down the little pumpkin’s face.

“I am happy to help you, but people are going to make fun of me for traveling with a pumpkin. They’ll think I am too scared to travel by myself.”

“Not at all, you’ll just be traveling with a friend. What’s wrong with that?” asked the little pumpkin.

Oscar smiled at the little pumpkin and said, “You’re right. There’s nothing wrong with that. Traveling with a friend is a good thing. By the way, since we’re becoming friends we should know each other’s names don’t you think? Mine’s Oscar. What’s yours?” “I have no idea,” said the little pumpkin. “Nobody’s ever addressed me by a name before.”

“Well, let’s be on our way and we’ll think of one for you,” said Oscar.

Oscar picked up the little pumpkin and placed her on his back. And off they went.

The long journey had been a smooth one for Oscar and the little pumpkin until they arrived at the zoo. Even though it was still daytime, the sky had become very dark. It was hard to see because a storm had knocked out all the power at the petting zoo. Oscar, with the little pumpkin still on his back, entered the petting zoo, and they were both surprised by how quiet it was.

“I wonder where everyone is?” asked the little pumpkin.

“Probably still hiding from the storm that blew through,” said Oscar.

“Oh my goodness, a lion!” yelled Oscar to the little pumpkin. “Let’s get out of here!”

But before Oscar and the little pumpkin had time to run away, a loud laugh echoed throughout the entire zoo. When they turned around a goat was pointing at them from inside his cage. The goat could hardly control himself. He was laughing hysterically. “Boy, did I get you two or what,” said the goat. “This is a petting zoo. You should know there aren’t any lions here.”

“That was a mean trick to play on us,” said the little pumpkin.

“I was just having a little fun,” said the goat.

Suddenly a loud-booming voice yelled out, “I am the manager of this petting zoo! Who are you?”

“Okay, I have to go,” said the goat. The goat ran toward the back corner of his cage and hid behind a bale of hay. The zoo manager who now stood over Oscar and the little pumpkin said, “Well, are you going to answer my question?” Oscar shook as he stood up to answer the zoo manager.

“Hello, my name is Oscar and we’ve come to live here with your kind permission sir.”

“If by we you’re referring to yourself and the pumpkin, then the answer is no.”

“Well, she’s my friend, and yes, she was hoping to live here as well. You see…”

The zoo manager interrupted Oscar and said, “I don’t have any need for a pumpkin. They’re messy and don’t serve any purpose.” “Oh, but we do,” said the little pumpkin. “I can be the jack-o’-lantern children see when they visit the zoo on Halloween.” “Children come here to see animals. They don’t come to see pumpkins,” said the zoo manager. “Turkey, you can stay if you want, but you’ll have to leave if you can’t part with your friend.”

Oscar stood still without saying a word, so the zoo manager just shook his head and walked away.

After taking a deep breath Oscar shouted to the zoo manager, “You should be ashamed of yourself for treating my friend that way.” The zoo manager turned around and stuck out his tongue and just kept walking.

“Don’t you worry,” said Oscar to the little pumpkin. “We’ll find a home somewhere and you’ll still be a jack-o’-lantern in time for Halloween.”

“Oscar, Halloween is tomorrow; face it, I’ll never be a jack-o’-lantern now,” cried the little pumpkin.

It was hard for Oscar to see the little pumpkin so upset. He felt that he had let his friend down.

As Oscar and the little pumpkin began to exit the petting zoo, they heard the zoo manager cry out, “Oh no, I forgot to buy batteries for the flashlights. Now, what am I going to do.”

Even though the storm had passed, the zoo was still without power and it was hard to see. But suddenly the darkness in the zoo began to fade, as an incredibly bright light lit up the entire sky. It was the little pumpkin who was lighting the way as Oscar held her high above his head.

The little pumpkin had become the jack-o-lantern she always dreamed of and her light made everyone in the zoo feel safe. The zoo manager was especially thankful to Oscar and the little pumpkin and apologized for how he had behaved. He promised to be kind to all the animals and to those who visited the zoo.

And that’s how it came to be that the favorite attraction at the Belvar petting zoo was a turkey with a jack-o’-lantern by his side. After Oscar blew out the candle that lay inside the little pumpkin on Halloween night, he knew Thanksgiving had also come early that year. Oscar knew what a lucky turkey he was and felt very thankful indeed to have a friend named Hope.