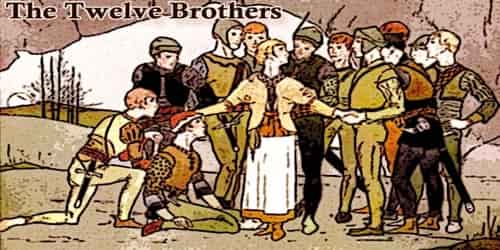 There were once a king and queen who had twelve children all boys. Now, one day the king told his wife that if a daughter should be born, all the sons must die that their sister alone might inherit his kingdom and riches.

So the king had twelve coffins made, which were filled with shavings, and in each was the little pillow for the dead. He had them locked up in a private room, the key of which he gave to the queen, praying her not to speak of it to anyone. But the poor mother was so unhappy that she wept for a whole day, and looked so sad that her youngest son noticed it.

He had the Bible name of Benjamin and was always with his mother.

“Dear mother,” he said, “why are you so sorrowful?”

“My child, I may not tell you,” she replied; but the boy allowed her no rest till she unlocked the door of the private room, and showed him the twelve coffins filled with shavings.

“Dearest Benjamin,” she said, “these coffins are for you and your brothers; for if you should ever have a little sister, you will all die, and be buried in them.”

She wept bitterly as she told him, but her son comforted her, and said, “Do not weep, dear mother. We will take care of ourselves, and go far away.”

Then she took courage, and said, “Yes, go away with your eleven brothers, and remain in the forest; and let one climb a tree, from whence he will be able to see the tower of the castle; If I should have a son, a white flag shall be hoisted, and then you may return home; but if you see a red flag, you will know it is a girl, and then hasten away as fast as you can, and may Heaven protect you! Every night I will pray for you, that you may not suffer from the cold in winter or the heat in summer.”

Then she blessed all her sons, and they went away into the forest, while each, in turn, mounted a high tree daily, to watch for the flag on the tower.

Eleven days passed, and it was Benjamin’s turn to watch. He saw the flag hoisted, and it was red the signal that they must die. The brothers were angry, and said, “Shall we suffer death on account of a maiden? When we find one we will kill her, to avenge ourselves.”

They went still farther into the forest and came upon a most pleasant little cottage, which was uninhabited. “We will make this our home,” they said; “and Benjamin, as you are the youngest and weakest, you shall stay at home and keep house, while we go out and procure food.”

So they wandered about the forest, shooting hares, wild rabbits, pigeons and other birds, which they brought to Benjamin to prepare for food. In this cottage, they lived for ten years happily together, so that the time passed quickly.

Their little sister was growing a great girl. She had a sweet disposition and was very beautiful to look upon. She wore rich clothes and a golden star on her forehead.

One day, when she was about ten years old, she discovered in her mother’s wardrobe twelve shirts. “Mother,” she exclaimed, “whose shirts are these? They are much too small for my father.”

The queen sighed as she replied, “Dear child, these shirts belong to your twelve brothers.”

“Twelve brothers!” cried the little maiden. “Where are they? I have not even heard of them.”

“Heaven knows where they are,” was the reply; “but they are wandering about the world somewhere.” Then the queen took her little daughter to the private room in the castle, and showed her the twelve coffins which had been prepared for her brothers, and related to her, with many tears, why they had left home.

“Dear mother,” said the child, “do not weep. I will go and seek my brothers.” So she took the twelve shirts with her and wandered away into the forest.

She walked for a whole day, and in the evening came to a cottage, stepped in, and found a young boy, who starred with astonishment at seeing a beautiful little girl dressed in rich clothing and wearing a golden star on her forehead.

“I am a king’s daughter,” she said, “and I seek my twelve brothers, and I intend to search for them till I find them;” and she showed him their shirts.

Then Benjamin knew that she was his sister, and said, “I am your youngest brother, Benjamin.” Then she wept for joy. They kissed each other with deep affection and were for a time very happy.

At last, Benjamin said, “Dear sister, we have made a vow that the first young maiden we meet should die because through a maiden we have lost our kingly rights.”

“I would willingly die,” she said, “if by so doing I could restore my brothers to their rightful possessions.”

“No, you shall not die,” he replied. “Hide yourself behind this tub until our eleven brothers come home; then I will make an agreement with them.”

At night the brothers returned from hunting, and the supper was ready. While they sat at the table, one of them said, “Well, Benjamin, have you any news?”

“Perhaps I have,” he said, “although it seems strange that I, who stay at home, should know more than you, who have been out.”

“I will tell you if you will make one promise.”

“Well, then, promise me that the first maiden you meet within the forest shall not die.”

“Then,” said the youngest brother, “our sister is here;” and, rising, he lifted the tub, and the king’s daughter came forth in her royal robes and with a golden star on her forehead, and looking so fair and delicate and beautiful that the brothers were full of joy, and kissed and embraced her with the fondest affection.

She stayed with Benjamin and helped him in keeping the house clean and cooking the game which the others brought home. Everything was so nicely managed now and with so much order, the curtains and the quilts were beautifully white, and the dinners cooked so well that the brothers were always contented, and lived in great unity with their little sister.

There was a pretty garden around the house in which they lived, and one day, when they were all at home dining together, and enjoying themselves, the maiden went out into the garden to gather them some flowers.

She had tended twelve lilies with great care, and they were now in such splendid bloom that she determined to pluck them for her brothers, to please them.

But the moment she gathered the lilies, her twelve brothers were changed into twelve ravens, and flew away over the trees of the forest, while the charming house and garden vanished from her sight. Now was the poor little maiden left all alone in the wildwood, and knew not what to do; but on turning round she saw a curious old woman standing near, who said to her, “My child, what hast thou done? Why didst thou not leave those white flowers to grow on their stems? They were thy twelve brothers, and now they will always remain ravens.”

“Is there no way to set them free?” asked the maiden, weeping.

“No way in the world,” she replied, “but one, and that is far too difficult for thee to perform; yet it would break the spell and set them free. Hast thou firmness enough to remain dumb seven years, and not speak to anyone, or even laugh? For if ever you utter a single word, or fail only once in the seven years, all you have done before will be vain, and at this one word your brothers will die.”

“Yes,” said the maiden, “I can do this to set my brothers free.”

Then the maiden climbed into a tree, and, seating herself in the branches, began to knit.

She remained here, living on the fruit that grew on the tree, and without laughing or uttering a word.

As she sat in her tree, the king, who was hunting, had a favorite hound, who very soon discovered her, ran to the tree on which the maiden sat, sprang up to it, and barked at her violently.

The king came nearer and saw the beautiful king’s daughter with the golden star on her forehead. He was so struck with her beauty that he begged her to come down and asked her to be his bride. She did not speak a word but merely nodded her head. Then the king himself climbed up into the tree and bringing her down, seated her on his own horse and galloped away with her to his home.

The marriage was soon after celebrated with great pomp, but the bride neither spoke nor laughed.

When they had lived happily together for some years, the king’s mother, a wicked woman, began to raise evil reports about the queen, and said to the king, “It is some beggar girl you have picked up. Who can tell what wicked tricks she practices? She can’t help being dumb, but why does she never laugh? Unless she has a guilty conscience.” The king at first would listen to none of these suspicions, but she urged him so long, and accused the queen of such wicked conduct, that at last, he condemned her to be burnt to death.

Now in the court-yard, a great fire was kindled, and the king stood weeping at a window overlooking the court of the palace, for he still loved her dearly. He saw her brought forth and tied to the stake; the fire kindled, and the flames with their forked tongues were creeping towards her, when at the last moment the seven years were past, and suddenly a rustling noise of wings was heard in the air; twelve black ravens alighted on the earth and instantly assumed their own forms they were the brothers of the queen.

They tore down the pile and extinguished the fire, set their sister free, and embraced her tenderly. The queen, who was now able to speak, told the king why she had been dumb and had never laughed.

The delight of the king was only equaled by his anger against the wicked witch, who was brought to justice and ordered to be thrown into a vat of oil full of poisonous snakes, where she died a dreadful death.