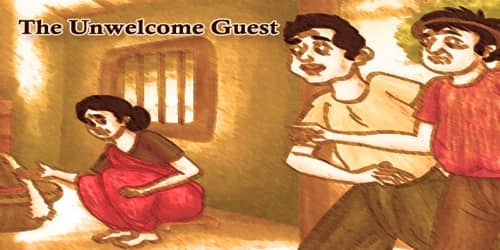 Once upon a time, there lived a very poor man named Ponnan. Although he had little money and food, he always shared whatever he had with people: some, he hardly even knew. His wife would despair over this.

“Please think about your family first! You bring random strangers home for meals! Do you want us to starve to death?” she would lament.

But Ponnan was too generous to refuse anyone, and many people took advantage of his kind nature.

One morning, Ponnan set off for work. His wife finished her chores, thinking about how to change her husband’s ways. She happened to look out of the window and saw two men walking nearby. Much to her irritation, she saw that they were walking towards the hut, talking and rubbing their stomachs in anticipation. “Oh God! Not again! I’m sure Ponnan has invited them home for lunch!” she fumed. “I have to do something to stop this nonsense today!”

“This is the last day Ponnan brings anyone home for a meal. I’m sick and tired of feeding other people and starving myself!” She sat in front of it and started to chant mantras, keeping her ears open for the men. The men soon entered the hut, hoping for a scrumptious free meal. “I’m going to eat to my heart’s content!” one man easy saying to another. Ponnan’s wife welcomed them warmly. “Do come in. Make you at home!” she said, smiling. They were pleased by her warm welcome but stopped short when they saw the mortar and pestle adorned on the floor.

“What is this?” Asked one man, puzzled. “Are you worshipping a mortar and pestle?” asked the other man. The wife smiled. “Didn’t my husband tell you?” asked the wife innocently. “It is his deity, a very strange one too.” “How do you mean?” asked one man uneasily. Ponnan’s wife took on an eerie tone. “It demands human blood!”

The men gasped, horrified. “What?” “Yes, it’s true,” she continued calmly. “My husband invites guests home. When they come, he starts to hit them on the head with the pestle, drawing as much blood as he can. Then he offers the blood to the deity. That’s the usual ritual we follow.” The men went speechless with terror.

“I’ve told him not to do it so many times, but does he listen?” questioned Ponnan’s wife. “It is not easy to clean all the blood from the floor,” she said. The terrified men raced out of the house just as Ponnan was entering. “What happened?” he asked his wife. “They wanted the pestle,” she said, “but I wouldn’t give it.” “You fool! Why didn’t you let them have it?” said Poonam.

Picking up the pestle, he ran after them. “Come back! Take the pestle!” he shouted. The frightened men thought he was coming to bash their heads and ran faster.

After that, no one accepted Ponnan’s invitations ever again, and it puzzled him. But his wife kept the secret all to herself.