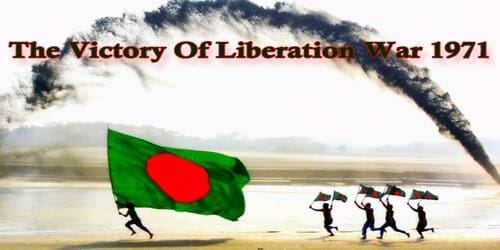 The Victory Of Liberation War 1971

It was 16th December 1971. The morning sun was peeping over the horizon as if it had been smiling with a heavenly ray. Durjoy was starting at the sun. He guarded the camp of freedom fighters the whole night. Just beside him, a radio was switched on through which a declaration of the surrender of the Pak Army floated in. He could not believe his ear. He stood like a living sculptor. He could remember the beginning of the war. It had broken out on the 26th March 1971, when the Pakistan Army launched a military operation called ‘Operation Searchlight’ against Bengals civilians, students, intellectuals and armed personnel who were demanding that the Pakistani military junta accept the results of the 1970’s first democratic election of Pakistan, which was won by an eastern party, or to allow separation between East and West Pakistan.

Bengali politicians and army officers announced the declaration of Bangladesh’s independence in response to ‘Operation Searchlight’. Bengali military, paramilitary, and civilians formed the “Mukti Bahini” which was engaged in guerrilla warfare against Pakistani forces. The Pakistani Army, in collusion with religious extremist militias called the Razakars, Al-Badr and Al-Shams engaged themselves in the systematic genocide of Bengali civilians, particularly nationalists, intellectuals, youth, and religious minorities. Durjoy started crying like a child. The Pak army had already snatched everything from him. Durjoy lost his parents and two sisters. Their only Shelter, their one-storeyed building had already been damaged.