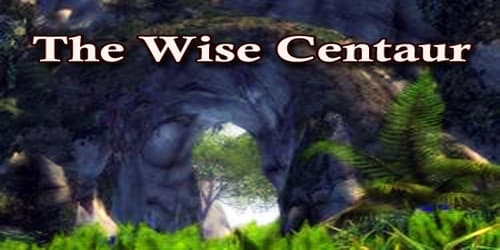 Long ago, centaurs roamed the mountainsides of Greece. Mountain shepherds who told tales of the centaurs spoke of coming upon one of them standing motionless among the trees. The shepherd might think, for a moment, that he had spied a man, for the centaur had a human head, muscular arms, and a strong, arching neck. But when the centaur moved, he gave away his true form. The centaur’s body was that of a powerful horse.

They were wild creatures, fierce and often cruel, with huge, dangerous hooves and hands like claws, and most men tried to stay as far away from them as possible, for the centaurs brought chaos to the world of men.

But two centaurs ‘Chiron’ and ‘Pholus’ descended from a different line. Pholus was the son of Silenus and a nymph, Chiron the son of the great Titan king Cronos and the sea nymph Philyra. Pholus and Chiron were peace-loving and always kind to humans.

When Philyra gave birth to her centaur-shaped child, she begged the gods to transform her into a tree, and she left Chiron to live alone near a cave on faraway Mount Pelion. Chiron grew up there, far from the world of men and gods, and though he lived among the other centaurs, he kept himself apart. Unlike the other centaurs, his interests were not in drinking and merrymaking. Chiron wanted to learn all there was to know in the world.

In his distant cave, he studied and became famous for his knowledge of a thousand things. He taught humans to use plants and medicinal herbs for healing, and his musical talent was so great the gods said that even the stars stopped to listen to his songs.

As time passed, many gods and men sent their sons to learn from Chiron. The great heroes Jason, Peleus, Achilles, Asclepius and Heracles all were foster sons of the great centaur, and he taught them all he knew. Most important, Chiron taught his pupils to combine their physical, moral and intellectual strengths. “You must use all three if you wish to be truly heroic,” he taught them. And the greatest of the Greek heroes absorbed Chiron’s wisdom and goodness.

But Chiron stayed in the mountains. Sometimes, on their journeys, his former students and foster sons would visit him. They would sit in his cave, telling him tales of their adventures in the world. Sadly, one of the greatest heroes would be Chiron’s downfall.

One summer day, Heracles went to the mountain to visit his old friends Pholus and Chiron. Coming first to Pholus cave, Heracles called out, “It is your friend come to visit.” Pholus, pleased to see him, served him a wonderful supper.

“Let us have some wine,” Heracles said. Pholus shook his head. “There is just one jar, and it belongs to all the centaurs,” he said. “It was a gift from the god Dionysus, and we must not open it.”

Heracles waved his hand. “Open it!” he said bravely. “Do not be afraid,” for Heracles feared no one.

At last Pholus agreed. He fetched the jar and opened it, but when the other centaurs smelled the wine, it maddened them, and they dashed from their caves and out from among the trees. Carrying flaming torches, they rushed Pholus cave. Heracles managed to fend them off, but many of the creatures were mortally wounded.

Tending one of his fellow centaurs, Pholus drew Heracles poisoned arrows from a wound and accidentally dropped it on his foot. The poison instantly killed him. Heracles powered by anger and accompanied by Chiron, drove off the others, chasing them all the way to Cape Malea where they took refuge with Chiron. In the battle that followed, Chiron accidentally dropped one of Heracles’ poisoned arrows. It grazed his leg, and Heracles stared in disbelief and anguish at Chiron’s deep, painful wound.

“You are the greatest healer in the world, Chiron,” Heracles cried. “Surely there is something you can do to heal your wound.”

Chiron sadly shook his head and shivered in pain. “I warned you long ago when you were my student that your weapons were not natural. This wound cannot be healed, and because I am immortal, I cannot die.”

For a long, while Chiron writhed in anguish and search though he did for a cure, he could find none. Unable to recover, he prayed to the gods to grant him death.

The gods, saddened by Chiron’s pain and thankful to him for all his goodness, granted his wish. Prometheus took on Chiron’s immortality, and so, quietly, peacefully, Chiron lay down to die.

When the greatest of the centaurs died, the world was quiet. The other centaurs fled and the sky wept rain upon the earth. Heracles knelt down and sobbed with grief at the loss of his great friend and the wisest of teachers.

“He will not be forgotten,” the gods proclaimed, and Heracles, hearing this, looked up.

There, high in the sky, he saw a new constellation of stars. And so it was that Chiron had been transformed into the newest family of stars. When Heracles saw the strong and gentle archer with the centaur’s sleek body aiming a bow and arrow across the starlit sky, he smiled, for he knew Chiron would always watch over people and guide them to goodness and knowledge.