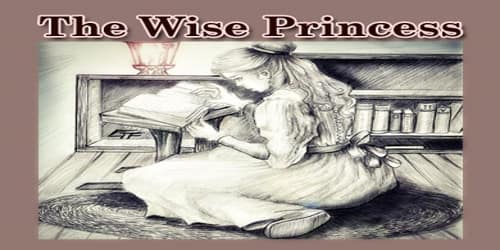 Once upon a time, a king had one daughter whose name was Marja. He wished her to be the wisest woman in the world, and so he sent far and wide for the finest scholars. Teachers came from everywhere. Daily they taught Marja all they knew.

Marja loved learning, and most of all, she loved the many languages of the world. She learned Greek, English, Spanish, French, and Japanese. She learned Portuguese, Latin, German and Chinese. Before long, Marja knew more than all her teachers combined. She could speak to every visitor in his own language.

The king soon understood that Marja must find a husband who was as wise as she. He sent out a proclamation:

“Princess Marja will marry the man who can speak a language she does not know. Beware suitors: Anyone who dares to seek the hand of the princess but cannot speak a new tongue will be thrown into the wintry sea.”

Princes and dukes, knights and lords heard the proclamation and sighed. They shook their heads and grumbled among themselves. “No one knows as many languages as the princess,” they all agreed. And no one came to seek Marja’s hand in marriage.

Marja grew lonely and sad. “Father, will no one marry me?” she asked.

Her father took his daughter’s hands in his. “I fear that may be true, my child,” he said sadly. “There seems to be no man wise enough for you.”

Meanwhile, outside the palace, a young shepherd carrying a leather satchel on his back appeared at the gates.

“I am Matti,” the lad announced to the king’s guards. “I have come to seek the hand of the wise princess Marja.”

The king’s guards laughed. One of them said, “Run to your flocks, boy. You are a simple shepherd. You could never hope to win so marvelously a woman. Run before the king throws you into the sea.”

But Matti smiled. “Open the gates,” he said. “I can speak many languages the princess has never heard before.”

The guards shook their heads. “Give up, boy,” another said.

“I will not,” he answered proudly.

And so, at last, the guards led Matti to the king’s throne room. There the lovely princess sat beside her father. When she saw the lad, she smiled, for she liked the gleam in his eye.

“Your majesty,” the guards announced, “this lad has come to woo your daughter.”

Princess Marja was delighted by the handsome lad, but she was also afraid of him. “Father,” she whispered, “please doesn’t harm him. He seems kind and so very brave.”

The king looked at Matti and frowned. “If you dare fail to speak an unknown language, son, do you know what will happen to you?”

Matti smiled. “I do,” he said. “And I am not afraid of the sea. Besides, I believe you will find that your daughter does not know all there is to know.”

The king shrugged. “Speak your language, then,” he said.

Matti quickly walked to the princess’s side. “Beautiful princess,” he said, “listen closely.” He reached into his satchel and pulled out a tiny sparrow. “Tsuuu, tsuuu, tsuuu,” the sparrow chirped.

Matti turned to the princess. “Do you understand?” he asked.

The princess shook her head.

“But princess,” Matti said calmly, “you claim to understand all languages. The sparrow asks if he can alight upon your shoulder.” He let go of the sparrow and whispered, “Tsiii, tsii,” and the sparrow flew at once to the princess and alighted upon her shoulder.

Marja clapped her hands. “How wonderful,” she cried.

“Wait!” Matti said, raising his hand. He again reached into his satchel and pulled out a shiny black crow. “Cwaak, cwaak,” the crow cried. Matti patted the bird’s head. “So sorry,” he said, and he gently placed the crow upon the floor.

“You understood, of course?” Matti asked the princess.

She shook her head. “No,” she said softly.

“He wants his freedom,” Matti said, and he walked to the door and opened it. “Cwiik, cwiik,” he cried. When the crow heard these words, he flew out the door to his freedom.

Again the princess stared. “How do you know what they say?” she asked.

Matti smiled again. “I have spent my days in the forest, listening carefully. I can speak the language of the beasts and birds. If you marry me, I will teach you, for there are many languages even the greatest scholars do not know.”

The king was furious. He turned to his daughter. “I thought you were the most learned person in the world,” he cried. “How can you let a lowly shepherd make a fool of you?”

Matti once again stepped forward. “Sire, your daughter is wise beyond words,” he said, “for only the wise can admit that they do not know everything.”

Marja was so pleased with Matti’s understanding that she begged her father to allow her to marry him.

The king, seeing the joy in his daughter’s face, knew he was wrong to have judged Matti so harshly. “You have won my daughter,” he said, “and I wish you both joy.”

Matti and Marja married and lived happily ever after, always surrounded by the birds and beasts, always seeking wisdom, always wise enough to know that they could always learn more.