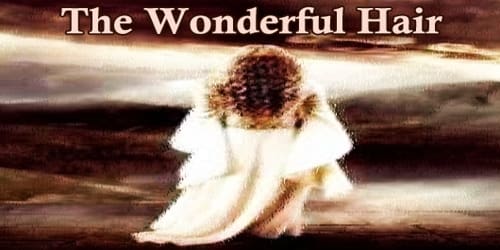 There was a man who was very poor, but so well supplied with children that he was utterly unable to maintain them, and one morning more than once prepared to kill them, in order not to see their misery in dying of hunger, but his wife prevented him.

One night a child came to him in his sleep and said to him: “Man! I see that you are making up your mind to destroy and to kill your poor little children, and I know that you are distressed thereat; but in the morning you will find under your pillow a mirror, a red kerchief, and an embroidered pocket-handkerchief; take all three secretly and tell nobody; then go to such a hill; by it you will find a stream; go along it till you come to its fountain-head; there you will find a damsel as bright as the sun, with her hair hanging down over her back. Be on your guard, that the ferocious she-dragon do not coil around you; do not converse with her if she speaks; for if you converse with her, she will poison you, and turn you into a fish or something else, and will then devour you but if she bids you examine her head, examine it, and as you turn over her hair, look, and you will find one hair as red as blood; pull it out and run back again; then, if she suspects and begins to run after you, throw her first the embroidered pocket-handkerchief, then the kerchief, and, lastly, the mirror; then she will find occupation for herself. And sell that hair to some rich man; but don’t let them cheat you, for that hair is worth countless wealth; and you will thus enrich yourself and maintain your children.”

When the poor man awoke, he found everything under his pillow, just as the child had told him in his sleep; and then he went to the hill. When there, he found the stream, went on and on alongside it, till he came to the fountain-head. Having looked about him to see where the damsel was, he espied her above a piece of water, like sunbeams threaded on a needle, and she was embroidering at a frame on stuff, the threads of which were young men’s hair.

When the damsel came to the mirror, the like of which she had never seen before, she lifted it up, and when she saw herself in it, not knowing that it was herself, but thinking that it was somebody else, she, as it was, fell in love with herself in the mirror, and the man got so far off that she was no longer able to overtake him. When she saw that she could not catch him, she turned back, and the man reached his home safe and sound. After arriving at his home, he showed his wife the hair and told her all that had happened to him, but she began to jeer and laugh at him. But he paid no attention to her and went to a town to sell the hair.

A crowd of all sorts of people and merchants collected round him; one offered a sequin, another two, and so on, higher and higher, till they came to a hundred gold sequins. Just then the emperor heard of the hair, summoned the man into his presence, and said to him that he would give him a thousand sequins for it, and he sold it to him. What was the hair?

The emperor split it in two from top to bottom and found registered in it in writing many remarkable things, which happened in the olden time since the beginning of the world. Thus the man became rich and lived on with his wife and children. And that child that came to him in his sleep was an angel sent by the Lord God, whose will it was to aid the poor man, and to reveal secrets which had not been revealed till then.