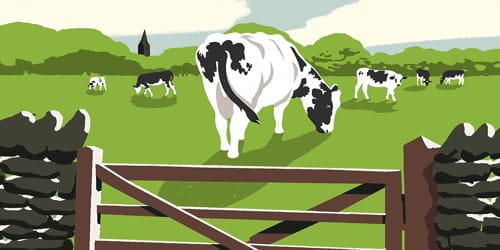 The Wondrous Cow (A Tale From India)

Once upon a time, a famous sage lived in a hermitage in India. His name was Vasishtha, and he lived in poverty, committed to meditation and study in his forest retreat.

Vasishtha owned only one thing, and that was a cow. The sage was good to his cow and loved her with all his heart. In return, the cow provided everything he needed. Whenever Vasishtha said “Give,” the cow gave him whatever he asked, whether it was food or drink or clothing.

After a while, people grew jealous of Vasishtha and his magical cow. They spoke of little else, and before long word about the cow spread throughout the land.

A powerful king on a hunting expedition near Vasishtha’s hermitage heard tales of the cow. He decided he had to see for himself, and so he asked to be taken to see the holy man.

Vasishtha welcomed the king, bowing down before him. Then he turned to his cow and said, “Give me a feast to offer our fine guests.”

The king stood amazed as an endless stream of food and drink appeared. “This is fantastic!” the king cried. “I must have this cow.”

Vasishtha bowed. “She is a wonderful creature.”

“I will give you a thousand cows in exchange for yours,” the king said.

“Thank you,” Vasishtha said, “but I am pleased with my cow. She gives me all I need.”

“A thousand cows will bring you wealth,” the king argued.

“Oh, but she not only gives me what I need,” Vasishtha replied. “She serves the gods and spirits of the dead as well. She must stay.”

“But I am king!” the king cried angrily. “When a king cannot have what he wishes, he takes it by force. My armies will overpower you.”

Vasishtha bowed humbly. “I devote my life to the study of the sacred books. I have read that kings do whatever they wish and take whatever they like and never think of others. But I am a poor, simple man, and I cannot fight your armies.”

“That’s right!” the king cried, for Vasishtha’s calm infuriated him. He ordered his men to throw a rope around the cow’s neck and pull her away. “She will be mine.”

The cow planted her feet in the earth and turned to face her master, her eyes filled with sadness. Vasishtha’s heart went out to her, but the king’s men beat her with sticks and cried, “Move, cow. Come with us. Now!”

Vasishtha stepped close to his cow. “I understand your sadness,” he said, “but I can do nothing. Kings are all-powerful, and he means to take you by force.”

“Do you want me to leave you?” she whispered. “Do you not care how the king treats me?”

“You can see this king has much force. My only strength is the strength of my spirit to forgive. I cannot stop the king from taking you, but I do not wish you to leave.”

The cow nodded when she heard Vasishtha’s words, and a moment later her appearance changed completely. Her eyes flashed, and her head and neck grew enormous. She kicked her powerful legs and rushed at the king and his men. She swished her tail, and when she did, hot coals and flames flew everywhere. From the fiery coals grew an army of soldiers, warriors of every land, each one wearing the uniform of his country. The cow’s army charged the king and his men with all the fury and force they had.

They attacked, but more amazing still, they caused no harm. Vasishtha could see they wanted only to frighten the king, and this they did. They gave chase, and the king and his men ran away, terrified.

The chase went on for miles, but the cow’s army killed no one.

At last, the king reached his palace, and there he stopped and turned to face the army. “I understand,” he said, and the army retreated.

He changed that very day. Until then he had boasted that he could do and say and have whatever he wished, but now he saw that he had no strength compared to the strength of a man of wisdom and spirit. He gave up his kingdom and moved to a hermitage, and from that day on he worked to become a holy man.

After many years of solitude, meditation, and prayer, he became a sage and lived in peace and happiness, remembering always to give thanks to the wondrous cow for teaching him what true strength is.

ADDENDA: This tale is found in the Mahabharata, the great epic poem composed of 18 books and containing much of the mythology and religion of the Hindus. Vasishtha was considered one of the seven great sages of the ancient world.