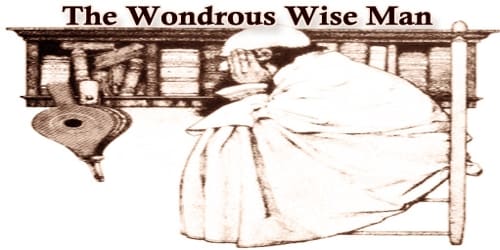 “There was a man in our town

And he was wondrous wise;

He jumped into a bramble bush

And scratched out both his eyes.

And when he saw his eyes were out,

He jumped into another bush

And scratched them in again!”

Our town is a quiet little town and lies nestling in a little valley surrounded by pretty green hills. I do not think you would ever have heard our town mentioned had not the man lived there who was so wise that everyone marveled at his great knowledge.

He was not always a wise man; he was a wise boy before he grew to manhood, and even when a child he was so remarkable for his wisdom that people shook their heads gravely and said, “when he grows up there will be no need of books, for he will know everything!”

His father thought he had a wondrous wise look when he was born, and so he named him Solomon, thinking that if indeed he turned out to be wise, the name would fit him nicely, whereas, should he be mistaken, and the boy grow up stupid, his name could be easily changed to Simon.

But the father was not mistaken, and the boy’s name remained Solomon.

When he was still a child Solomon confounded the schoolmaster by asking, one day,

“Can you tell me, sir, why a cow drinks water from a brook?”

“Well really,” replied the abashed schoolmaster, “I have never given the subject serious thought. But I will sleep upon the question and try to give you an answer to-morrow.”

“But the schoolmaster could not sleep; he remained awake all night trying to think why a cow drinks water from a brook, and in the morning he was no nearer the answer than before. So he was obliged to appear before the wise child and acknowledge that he could not solve the problem.”

“I have looked at the subject from every side,” said he, “and given it careful thought, and yet I cannot tell why a cow drinks water from a brook.”

“Sir,” replied the wise child, “it is because the cow is thirsty.”

The shock of this answer was so great that the schoolmaster fainted away, and when they had brought him to he made a prophecy that Solomon would grow up to be a wondrous wise man.

It was the same way with the village doctor. Solomon came to him one day and asked,

“Bless me!” exclaimed the doctor, “I must think I am bit before I answer, for I have never yet had my attention called to this subject.”

So he thought for a long time, and then he said, “I must really give it up. I cannot tell, for the life of me, why a man has two eyes. Do you know?”

“Then,” said the doctor, after taking a dose of quinine to brace up his nerves, for he remembered the fate of the schoolmaster, “then please tell me why a man was two eyes.

“A man has two eyes, sir,” returned Solomon, solemnly, “because he was born that way.”

And the doctor marveled greatly at so much wisdom in a little child and made a note of it in his note-book.

Solomon was so full of wisdom that it flowed from his mouth in a perfect stream, and every day he gave new evidence to his friends that he could scarcely hold all the wise thoughts that came to him. For instance, one day he said to his father,

“I perceive our dog has six legs.”

“You are surely mistaken, sir,” said Solomon, with the gravity that comes from great wisdom, “these are our dog’s forelegs, are they not?” pointing to the front legs of the dog.

“Well,” continued Solomon, “the dog has two other legs, besides, and two and four are six; therefore, the dog has six legs.”

“But that is very old,” exclaimed his father.

“True,” replied Solomon, “but this is a young dog.”

Then his father bowed his head in shame that his own child should teach him wisdom.

Of course, Solomon wore glasses upon his eyes, all-wise people wear them, and his face was ever grave and solemn, while he walked slowly and stiffly so that people might know he was the celebrated wise man, and do him reverence.

And when he had grown to manhood, the fame of his wisdom spread all over the world, so that all the other wise men were jealous, and tried in many ways to confound him; but Solomon always came out ahead and maintained his reputation for wisdom.

Finally, a very wise man came from Cumberland, to meet Solomon and see which of them was the wisest. He was a very big man, and Solomon was a very little man, and so the people all shook their heads sadly and feared Solomon had met his match, for if the Cumberland man was as full of wisdom as Solomon, he had much the advantage in size.

They formed a circle around the two wise men and then began the trial to see which was the wisest.

“Tell me,” said Solomon, looking straight up into the big man’s face with an air of confidence that reassured his friends, “how many sisters has a boy who has one father, one mother, and seven brothers?”

The big wise man got very red in the face, and scowled and coughed and stammered, but he could not tell.

“I do not know,” he acknowledged; “nor do you know, either, for there is no rule to go by.”

“Oh, yes, I know,” replied Solomon; “he has two sisters. I know this is the true answer because I know the boy and his father and his mother and his brothers and his sisters, so that I cannot be mistaken.”

Now all the people applauded at this, for they were sure Solomon had got the best of the man from Cumberland.

But it was now the big man’s turn to try Solomon, so he said,

“Fingers five are on my hand;

All of them upright do stand.

One a dog is chasing kittens;

One a cat is wearing mittens;

One a rat is eating cheese;

One a wolf is full of fleas;

One a fly is in a cup

How many fingers do I hold up?”

“Four,” replied Solomon, promptly, “for one of them is a thumb!”

The wise man from Cumberland was so angry at being outwitted that he sprang at Solomon and would no doubt have injured him had not our wise man turned and run away as fast as he could go. The man from Cumberland at once ran after him and chased him through the streets and down the lanes and up the side of the hill where the bramble-bushes grow.

Solomon ran very fast, but the man from Cumberland was bigger, and he was just about to grab our wise man by his coat-tails when Solomon gave a great jump and jumped right into the middle of a big bramble-bush!

The people were all coming up behind, and as the big man did not dare to follow Solomon into the bramble-bush, he turned away and ran home to Cumberland.

All the men and women of our town were horrified when they came up and found their wise man in the middle of the bramble-bush, and held fast by the brambles, which scratched and pricked him on every side.

“Solomon! Are you hurt?” they cried.

“I should say I am hurt!” replied Solomon, with a groan; “my eyes are scratched out!”

“How do you know they are?” asked the village doctor.

“I can see they are scratched out!” replied Solomon; and the people all wept with grief at this, and Solomon howled louder than any of them.

Now the fact was that when Solomon jumped into the bramble-bush he was wearing his spectacles, and the brambles pushed the glasses so close against his eyes that he could not open them; and so, like every other part of him was scratched and bleeding, and he could not open his eyes, he made sure they were scratched out.

“You must jump out,” replied the doctor, “since you have jumped in.”

So Solomon made a great jump, and although the brambles tore him cruelly, he sprang entirely out of the bush and fell plump into another one. This last bush, however, by good luck, was not a bramble-bush, but one of elderberry, and when he jumped into it his spectacles fell off, and to his surprise, he opened his eyes and found that he could see again.

“Where are you now?” called out the doctor.

“I am in the elderberry bush, and I have scratched my eyes in again!” answered Solomon.

When the people heard this, they marveled greatly at the wisdom of a man who knew how to scratch his eyes in after they were scratched out; and they lifted Solomon from the bush and carried him home, where they bound up the scratches and nursed him carefully until he was well again.

And after that, no one ever questioned the wondrous wisdom of our wise man, and when he finally died, at a good old age, they built a great monument over his grave, and on one side of it were the words,

“Solomon; the Man who was Wondrous Wise.”

And on the other side was a picture of a bramble-bush.