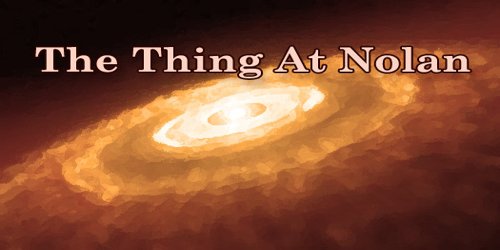 The Thing At Nolan

To the south of where the road between Leesville and Hardy, in the State of Missouri, crosses the east fork of May Creek stands an abandoned house. Nobody has lived in it since the summer of 1879, and it is fast going to pieces. For some three years before the date mentioned above, it was occupied by the family of Charles May, from one of whose ancestors the creek near which it stands took its name.

Mr. May’s family consisted of a wife, an adult son and two young girls. The son’s name was John the names of the daughters are unknown to the writer of this sketch.

John May was of a morose and surly disposition, not easily moved to anger, but having an uncommon gift of sullen, implacable hate. His father was quite otherwise; of a sunny, jovial disposition, but with a quick temper like a sudden flame kindled in a wisp of straw, which consumes it in a flash and is no more. He cherished no resentments, and his anger gone, was quick to make overtures for reconciliation. He had a brother living nearby who was unlike him in respect of all this, and it was a current witticism in the neighborhood that John had inherited his disposition from his uncle.

One day a misunderstanding arose between father and son, harsh words ensued, and the father struck the son full in the face with his fist. John quietly wiped away the blood that followed the blow, fixed his eyes upon the already penitent offender and said with cold composure, “You will die for that.”

The words were overheard by two brothers named Jackson, who were approaching the men at the moment; but seeing them engaged in a quarrel they retired, apparently unobserved. Charles May afterward related the unfortunate occurrence to his wife and explained that he had apologized to the son for the hasty blow, but without avail; the young man not only rejected his overtures, but refused to withdraw his terrible threat. Nevertheless, there was no open rupture of relations: John continued living with the family, and things went on very much as before.

One Sunday morning in June, 1879, about two weeks after what has been related, May senior left the house immediately after breakfast, taking a spade. He said he was going to make an excavation at a certain spring in a wood about a mile away, so that the cattle could obtain water. John remained in the house for some hours, variously occupied in shaving himself, writing letters and reading a newspaper. His manner was very nearly what it usually was; perhaps he was a trifle more sullen and surly.

At two o’clock he left the house. At five, he returned. For some reason not connected with any interest in his movements, and which is not now recalled, the time of his departure and that of his return were noted by his mother and sisters, as was attested at his trial for murder. It was observed that his clothing was wet in spots, as if (so the prosecution afterward pointed out) he had been removing blood-stains from it. His manner was strange, his look wild. He complained of illness, and going to his room took to his bed.

May senior did not return. Later that evening the nearest neighbors were aroused, and during that night and the following day a search was prosecuted through the wood where the spring was. It resulted in little but the discovery of both men’s footprints in the clay about the spring. John May in the meantime had grown rapidly worse with what the local physician called brain fever, and in his delirium raved of murder, but did not say whom he conceived to have been murdered, nor whom he imagined to have done the deed. But his threat was recalled by the brothers Jackson and he was arrested on suspicion and a deputy sheriff put in charge of him at his home. Public opinion ran strongly against him and but for his illness he would probably have been hanged by a mob. As it was, a meeting of the neighbors was held on Tuesday and a committee appointed to watch the case and take such action at any time as circumstances might seem to warrant.

On Wednesday all was changed. From the town of Nolan, eight miles away, came a story which put a quite different light on the matter. Nolan consisted of a school house, a blacksmith’s shop, a “store” and a half-dozen dwellings. The store was kept by one Henry Odell, a cousin of the elder May. On the afternoon of the Sunday of May’s disappearance Mr. Odell and four of his neighbors, men of credibility, were sitting in the store smoking and talking. It was a warm day; and both the front and the back door were open.

At about three o’clock Charles May, who was well known to three of them, entered at the front door and passed out at the rear. He was without hat or coat. He did not look at them, nor return their greeting, a circumstance which did not surprise, for he was evidently seriously hurt. Above the left eyebrow was a wound a deep gash from which the blood flowed, covering the whole left side of the face and neck and saturating his light-gray shirt. Oddly enough, the thought uppermost in the minds of all was that he had been fighting and was going to the brook directly at the back of the store, to wash himself.

Perhaps there was a feeling of delicacy a backwoods etiquette which restrained them from following him to offer assistance; the court records, from which, mainly, this narrative is drawn, are silent as to anything but the fact. They waited for him to return, but he did not return.

Bordering the brook behind the store is a forest extending for six miles back to the Medicine Lodge Hills. As soon as it became known in the neighborhood of the missing man’s dwelling that he had been seen in Nolan there was a marked alteration in public sentiment and feeling. The vigilance committee went out of existence without the formality of a resolution. Search along the wooded bottom lands of May Creek was stopped and nearly the entire male population of the region took to beating the bush about Nolan and in the Medicine Lodge Hills. But of the missing man no trace was found.

One of the strangest circumstances of this strange case is the formal indictment and trial of a man for murder of one whose body no human being professed to have seen one not known to be dead. We are all more or less familiar with the vagaries and eccentricities of frontier law, but this instance, it is thought, is unique.

However that may be, it is of record that on recovering from his illness John May was indicted for the murder of his missing father. Counsel for the defense appears not to have demurred and the case was tried on its merits. The prosecution was spiritless and perfunctory; the defense easily established with regard to the deceased an alibi. If during the time in which John May must have killed Charles May, if he killed him at all, Charles May was miles away from where John May must have been, it is plain that the deceased must have come to his death at the hands of someone else.

John May was acquitted, immediately left the country, and has never been heard of from that day. Shortly afterward his mother and sisters removed to St. Louis. The farm having passed into the possession of a man who owns the land adjoining, and has a dwelling of his own, the May house has ever since been vacant, and has the somber reputation of being haunted.

One day after the May family had left the country, some boys, playing in the woods along May Creek, found concealed under a mass of dead leaves, but partly exposed by the rooting of hogs, a spade, nearly new and bright, except for a spot on one edge, which was rusted and stained with blood. The implement had the initials C. M. cut into the handle.

This discovery renewed, in some degree, the public excitement of a few months before. The earth near the spot where the spade was found was carefully examined, and the result was the finding of the dead body of a man. It had been buried under two or three feet of soil and the spot covered with a layer of dead leaves and twigs. There was but little decomposition, a fact attributed to some preservative property in the mineral-bearing soil.

Above the left eyebrow was a wound a deep gash from which blood had flowed, covering the whole left side of the face and neck and saturating the light-gray shirt. The skull had been cut through by the blow. The body was that of Charles May.

But what was it that passed through Mr. Odell’s store at Nolan?