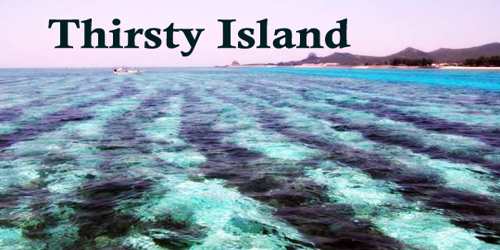 Travelers approaching a bush township are sure to find some distance from the town a lonely public-house waiting by the roadside to give them welcome. Thirsty Island is the outlying pub of Australia.

When China and British-India steamers arrive from the North the first place they come to is Thirsty Island, the sentinel at the gate of Torres Straits. New chums on the steamers see a fleet of white-sailed pearling luggers, a long pier clustered with a hybrid crowd of every color, caste, and creed under Heaven, and at the back of it all a little galvanized-iron town shining in the sun.

For nine months of the year a crisp, cool south-east wind blows; the snow-white beach is splashed with spray and dotted with the picturesque figures of Japanese divers and South Sea Island boatmen. Coconut palms line the roads by the beach, and the back of the town are the barracks and a fort nestling among the trees on the hillside. Thirsty Island is a nice place to look at.

The following description of a night at Thursday Island is taken from a new chum’s notebook:

“Passed Proudfoot shoal and arrived at Thursday Island. The first sight of Australia. A lot of men came aboard, all called Captain. They are all pearl-fishers or pilots, not a bit like the bushmen I expected. When they came aboard they divided into parties. Some invaded the Captain’s cabin; others sat in the smoking-room; the rest crowded into the saloon. They talked to the passengers about the Boer War, and told us about pearls worth 1000 pounds that had been found lately.”

One captain pulled a handful of loose pearls out of a jar and handed them round in a casual way for us to look at. The stewards opened bottles and we all sat down for a drink and a smoke. I spoke to one captain an oldish man and he grinned amiably but did not answer. Another captain leaned over to me and said, “Don’t take any notice of him, he’s boozed all this week.”

Conversation and drink became general. The night was very hot and close, and some of the passengers seemed to be taking more than was good for them. A contagious thirst spread round the ship and before long the stewards and firemen were at it. The saloon became an inferno of drink and sweat and tobacco smoke. Perfect strangers were talking to each other at the top of their voices.

“Young MacTavish, who is in a crack English regiment, asked the captain of a pearling lugger whether he didn’t know Talbot de Cholmondeley in the Blues.”

“The pearler said very likely he had met them, and no doubt he’d remember their faces if he saw them, but he never could remember names.”

“Another passenger a Jew was trying to buy some pearls cheap from the captains, but the more the captains drank the less anxious they became to talk about pearls.”

“The night wore on, and still the drinks circulated. Young MacTavish slept profoundly.”

One passenger gave his steward a sovereign as he was leaving the ship, and in half an hour the steward was carried to his berth in a fit alcoholic in its origin. Another steward was observed openly drinking the passenger’s whiskey. When accused, he didn’t even attempt to defend himself; the great Thursday Island thirst seemed to have communicated itself to everyone on board, and he simply had to drink.

About three in the morning a tour of the ship disclosed the following state of affairs: Captain’s room full of captains solemnly tight; smoking-room empty, except for the inanimate form of the captain who had been boozed all the week and was now sleeping peacefully with his feet on the sofa and his head on the floor. The saloon was full of captains and passengers the latter mostly in a state of collapse or laughing and singing deliriously; the rails lined with firemen who had business over the side; stewards ditto.

At last the Thursday Islanders departed, unsteadily, but still on their feet, leaving a demoralized ship behind them. And young MacTavish, who has seen a thing or two in his brief span, staggered to his berth, saying, “My God! Is all Australia like this place?”

When no ships arrive, the Islanders just drop into the pubs, as a matter of routine, for their usual evening soak. They drink weird compounds horehound beer, known as “lady dog”, and things like that. About two in the morning they go home speechless, but still able to travel. It is very rarely that an Islander gets helplessly drunk, but strangers generally have to be put to bed.

The Japanese on the island are a strong faction. They have a club of their own, and once gave a dinner to mark the death of one of their members. He was shrewdly suspected of having tried to drown another member by cutting his air pipe, so, when he died, the club celebrated the event. The Japanese are not looked upon with favor by the white islanders. They send their money to Japan thousands of pounds a year go through the little office in money-orders and so they are not “good for trade”.

The Manilamen and Kanakas and Torres Strait islanders, on the other hand, bring all the money they do not spend on the pearling schooner to the island, and “blow it in”, like men. They knife each other sometimes, and now and again have to be run in wholesale, but they are “good for trade”. The local lock-up has a record of eighteen drunks run in seven minutes. They weren’t taken along in carriages-and-four, either; they were mostly dragged along by the scruff of the neck.

An English new-chum made his appearance there lately a most undefeated sportsman. He was put down in a diving dress in about eight feet of water, where he bubbled and struggled about in great style. Suddenly he turned, rushed for the beach, and made for the foot of a tree, which he tried to climb under the impression that he was still at the bottom of the ocean. Then he was hauled in by the life-line.

The pearlers thought to get some fun out of him by giving him an oyster to open in which they had previously planted a pearl; he never saw the pearl and threw the oyster into the scuppers with the rest, and the pearlers had to go down on all fours and grope for that pearl among the stinking oysters. It was funny but not in the way they had intended.

The pearlers go out in schooners called floating stations (their enemies call them floating public-houses) and no man knows what hospitality is till he has been a guest on a pearling schooner. They carry it to extremes sometimes. Some pearlers were out in a lugger and were passing by one of these schooners. They determined not to go onboard, as it was late, and they were in a hurry. The captain of the schooner went below, got his rifle and put two bullets through their foresail. Then they put the helm down and went aboard; it was an invitation almost equivalent to a royal command. They felt heartily ashamed of themselves as they slunk up on deck, and the captain of the schooner eyed them reproachfully.

“I couldn’t let you disgrace yourselves bypassing my schooner,” he said; “but if it ever happens again I’ll fire at the deck. A man that would pass a schooner in broad daylight is better dead.”

There is a fort and garrison at Thirsty Island, but they are not needed. If an invading fleet comes this way it should be encouraged by every possible means to land at the island; the heat, the thirst, the horehound beer, and the Islanders may be trusted to do the rest.