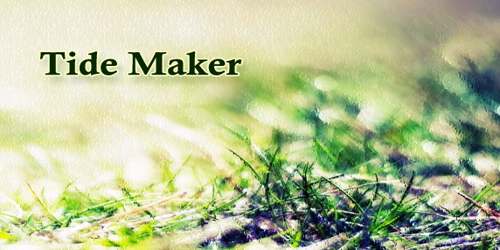 Long, long ago, in a time people have forgotten, the tides did not rush in and out the way they do today. Instead, the ocean washed up on the shore and stayed there, and all the clams and crabs and other ocean creatures swam underneath.

“If only we could catch the clams and crabs,” the people grumbled among themselves, “what delicious food we would eat then.”

“Oh yes,” others said longingly, “and seaweed, too. We could eat the seaweed, and we could weave it, too.” On and on they talked, describing the delights beneath the ocean that were out of their reach.

The people often were hungry in those days. They knew these things were beneath the ocean because there was an old, old woman who controlled the tides. She held a line attached to the ocean in her withered hands, and when she pulled it tight, the tide rose.

Sometimes she would tease the people and would let out the line. The ocean would rush away, leaving the sandy beach full of crabs and clams, seaweed and driftwood, shells and stones. The people would rush along the beach, picking up all that they could, and then the old woman, with a mocking laugh, would pull back on the tide line. The ocean roared as it covered the sea feast once more.

“Why won’t she let out the tide line?” the people asked in exasperation. “There is nothing we can do,” others answered. “The old woman controls our destiny, and if she wants us to starve, we will.”

Everyone complained, but all they could do was to wait for another day when the old woman might let out her line again.

“I’m going to fly to the old woman,” he announced. “I shall convince her that she must bring back the tides.”

And so Raven dressed in his blanket of shiny black feathers, and he flapped his wings and flew along the coastline. The old woman lived far up the beach, but at last he came to the little cabin where she made her home. Raven landed and hopped inside.

There sat the old woman, the tide line clasped tightly between her gnarled hands. She sat upon a blanket on the ground, her eyes closed. She sat as still as a stone, and Raven sat down across from her.

“What do you want?” she asked him without opening her eyes.

“Oh, nothing,” Raven answered, and he rubbed his belly. “I only came to tell you how delicious all those clams tasted. I wanted you to know they were the most wonderful clams I have ever eaten in all my life.”

The old woman’s eyes popped open and she stared at Raven. “What do you mean?” she asked. “What clams?”

Raven did not say another word. He patted his stomach again, sighed, and leaned backward, as if he were so full he could not sit up straight. “Oh my,” he said at last, “I fear I may have eaten too many, but they were lying there for anyone to take, so take them I did.”

Now the old woman stood up. “What on earth are you talking about?” she asked, but when Raven did not answer, she shuffled toward the door to look at the beach. Raven stood up at once and blocked her way. “Where are you going?” he asked.

“I want to see the beach,” she said, and Raven grinned. “All right,” he said, and moved away and pushed the old woman out the door. When she was outside, he tossed sand and dust into her eyes.

“What’s this?” she cried, and let go of the tide line to rub the dust and sand out of her eyes.

When she let the tide line loose, the tide rushed out, and now, all along the beach, for miles and miles, as far as Raven could see, the sand lay bare, the crabs and clams, seaweed and driftwood exposed.

“Raven,” the old woman cried, still rubbing at her eyes, “help me, Raven, help me to see again.”

Raven walked to the old woman’s side. “I will heal your eyes,” he said, “if you will let the tide line out each day, twice a day. We need the riches of the ocean for our people.”

“I will let the tide line loose, I promise,” the old woman said, so Raven gently washed the old woman’s eyes with fresh water from her cabin, and she could see again.

The old woman kept her word, and so it is that the tide rushes in and out again twice each day.