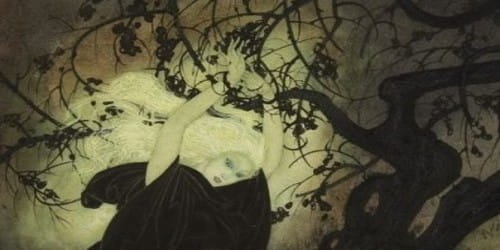 Tio Conejo Flies to Heaven (A Tale From South America)

Once upon a time Uncle Rabbit, who is called Tio Conejo, was searching in the forest for berries. His stomach growled, for winter was coming on, and fruit was growing scarce. The other forest creatures stayed out of Tio Conejo’s way, for he was a trickster, and no one ever knew what he would do next.

Soon Tio Conejo began to mutter. “I walk so much, but I find so little.” He sighed and wondered what trick he could play to find himself some food. Suddenly he came to a tiny bush that was still green, and on its branches grew a few berries.

“Mmmm, this is exactly where I want to be,” Tio Conejo said, and he began to nibble at the berries and forgot all about tricks.

Suddenly Uncle Buzzard, who is called Tio Zopilote, was flying overhead, looked down and saw Tio Conejo. He swooped low. “Glad to see you, Tio Conejo,” Tio Zopilote called, though he wasn’t glad to see him at all. He was angry with Tio Conejo, who had played many tricks on him in the past. Tio Zopilote had been waiting for a long, long time to take his revenge.

Tio Zopilote smiled to himself. “Tio Conejo, if you are truly hungry, I know just the place for you. Up in heaven are the best feasts. Yes, my old friend, if you want the best food in the world, it’s up here above the clouds you want to be.”

“I have never been to those feasts,” Tio Conejo said dejectedly. “I can’t fly, so I have no way of getting there.”

“Well, I’ll tell you what,” Tio Zopilote said, though he could barely contain his laughter. “There’s a great feast happening up there right now, and if you’ll bring along your guitar and play for me, I’ll fly you there. I’m sure my friends in heaven would love to hear you’re fine music.”

“Hold on and I’ll get my guitar,” Tio Conejo said and hopped back to his warren as fast as he could. He returned even faster, bringing with him his guitar.

“Now climb on my back. Hold onto me beneath my wings,” Tio Zopilote told Tio Conejo.

Tio Conejo strapped his guitar around his neck, climbed on Tio Zopilote’s back and held on tightly. Tio Zopilote flew into the sky. Up and up he flew, higher and higher. And all the time he was flying through that wintry sky, he was planning his revenge on Tio Conejo.

“Wait until you see the size of the fruit in heaven,” Tio Zopilote said and chuckled to himself. Oh, how sweet it will be, he thought, to fool Tio Conejo just the way he fools everyone else.

Down below, they could see the beautiful world spread out beneath them. The trees seemed only tiny specks. The other creatures looked like ants. The fruit wasn’t visible at all, and soon Tio Conejo’s mouth began to water as he thought of the huge fruit in heaven.

“Why don’t you play a song for me?” Tio Zopilote coaxed. “The trip will go faster that way.”

“Well, not now,” Tio Conejo said. “I’d prefer to hold onto your back.”

“Oh, I’ll fly carefully,” Tio Zopilote said, and so Tio Conejo reached for his guitar. Settling himself carefully on Tio Zopilote’s back, he began strumming a tune.

Tio Zopilote smiled wickedly and suddenly began to fly in tight circles. Then he flew in a zigzag. He turned upside down and circled again. He flew as fast as he could. He did everything possible to make Tio Conejo fall off.

“Stop your crazy flying,” Tio Conejo cried. “I’m dizzy and I’m going to fall,” but he let go of his guitar, and it swung wildly around his neck. He held onto Tio Zopilote’s neck as tightly as he could.

“I always fly this way when I’m near heaven,” Tio Zopilote said. “It’s the winds, you see. The winds of heaven are very different from the winds of the earth.”

“We’re near heaven,” said Tio Zopilote as he swooped and twisted and whirled some more.

Tio Conejo held Tio Zopilote’s wings out so they floated gently to the ground below.

When they landed on the soft earth, Tio Conejo jumped off Tio Zopilote’s back. “Take the guitar off my head!” Tio Zopilote cried.

“Ask your friends in heaven to take it off,” Tio Conejo laughed. And he skipped away.

Tio Zopilote pulled at that guitar. He twisted and turned. He stood on his head. But he could not shake that guitar loose.

At last, he slunk home. His wife laughed at him, but she pulled his head out of the guitar. With it came most of his feathers. Tio Zopilote’s neck was stripped bare.

Those feathers never grew back, and Tio Zopilote’s children never had feathers on their necks, either. And that’s the way it’s been with buzzards ever since.

As for Tio Conejo? Well, he’s still playing tricks, but the other creatures understand. After all, Tio Conejo is a trickster. And they never try to take revenge on him.