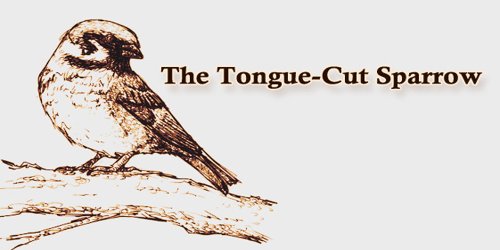 Once upon a time, there was an old man who lived all alone. And there was an old woman who lived all alone. The old man was merry and kind and gentle, with a good word and a smile for all the world. The old woman was sour and sad, as cross a patch as could be found in all the country-side. She grumbled and growled forever, and would not so much as pass the time of day with respectable folk.

The old man had a pet sparrow that he kept as the apple of his eye. The sparrow could talk and sing and dance and do all manner of tricks and was a very good company. So the old man found it when he came home from his work at night. There would be the sparrow twittering on the doorstep, and “Welcome home, master,” he would say, his head on one side, as pert and pretty as you please.

One day the old man went off to cut wood in the mountains. The old woman, she stayed at home for it was her washing day. She made some good starch in a bowl and she put it outside her door to cool.

“It will be all ready when I want it,” she said to herself. But that’s just where she made a mistake. The little sparrow flew over the bamboo fence and lighted on the edge of the starch bowl. And he pecked at the starch with his little beak. He pecked and he pecked till all the starch was gone, and a good meal he made, to be sure.

Then out came the old woman for the starch to starch her clothes.

You may believe she was angry. She caught the little sparrow roughly in her hand, and, alas and alack! she took sharp, sharp scissors and cut his little tongue. Then she let him go.

Away and away flew the little sparrow, over hill and over dale.

“And good riddance, too!” said the cruel old woman.

When the old man came home from the mountains he found his pet sparrow gone. And before long he knew all the tale. He lost no time, the good old man; he set out at once on foot, calling “Sparrow, sparrow, where are you, my tongue-cut sparrow?”

Over hill and over dale he went, calling “Sparrow, sparrow, where are you, my tongue-cut sparrow?”

After supper, the sparrow danced, whilst his grandmother played the samisen and the good old man beat time.

It was a merry evening.

At last, “All good things come to an end,” says the old man; “I fear it is late and high time I was getting home.”

“Not without a little present,” says the sparrow.

“Ah, sparrow dear,” says the old man, “I’d sooner have yourself than any present.”

But the sparrow shook his head.

“One of them is heavy,” says the sparrow, “and the other is light. Say, master, will you take the heavy basket or the light?”

“I’m not so young as I once was,” says the good old man. “Thanking you kindly, I’d sooner have the light basket; it will suit me better to carry that is, if it’s the same to you,” he says.

So he went home with the light basket. When he opened it, wonderful to tell, it was full of gold and silver and tortoise-shell and coral and jade and fine rolls of silk. So the good old man was rich for life.

Now, when the bad old woman heard tell of all this, she tied on her sandals and kilted her skirts and took a stout stick in her hand. Over hill and over dale she went and took the straight road to the sparrow’s house. There was the sparrow, and there were his brothers and sisters and children and his wife and his mother and his mother-in-law and his grandmother. They were not too pleased to see the bad old woman, but they couldn’t do less than ask her in as she’d come so far. They gave her red rice and white rice and daikon and fish, and who knows what besides, and she gobbled it up in a twinkling, and drank a good cup of saké. Then up she got. “I can’t waste any more time here,” she says, “so you’d best bring out your presents.”

They brought in two wicker baskets.

“One of them is heavy,” says the sparrow, “and the other is light. Say, mistress, will you take the heavy basket or the light?”

“I’ll take the heavy one,” says the old woman, quick as a thought. So she heaved it up on her back and off she set. Sure enough, it was as heavy as lead.

When she was gone, Lord! how the sparrows did laugh!

No sooner did she reach home than she undid the cords of the basket.

“Now for the gold and silver,” she said and smiled though she hadn’t smiled for a twelve-month. And she lifted up the lid.

The basket was full of ugly imps and elves and pixies and demons and devils. Out they came to tease the old woman, to pull her and to poke her, to push her and to pinch her. She had the fine fright of her life, I warrant you.