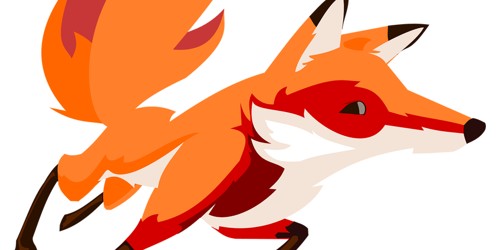 Tricks of a Red Fox

Tricks of a Red Fox

Once there was a red fox named Renard who was always playing tricks on others. Renard had a great many friends, and one of those friends was Bruin the Bear. Bruin and Renard, in fact, went into partnership, and the two once shared a house. Bruin believed Renard to be his best friend in the world, and Bruin trusted Renard to share with him, just as Bruin shared his honey with Renard.

The trouble was, Renard had other ideas. That crafty fellow had tricks swirling in his head. After a while, Bruin began to understand that Renard was not a true friend. Here’s what happened one winter day a long time ago:

Renard was trotting down the road toward home when he spotted a man pulling a cart that was brimming with fish. “Mmmm,” Renard said, and his mouth watered, “those fish look far too good to waste on people.” So he ran and ran until he passed the cart, and he ran farther still until he was well ahead of it. He lay down on the road and pretended to be dead.

Well, when that man passed Renard, he said, “That dead fox would make a beautiful red scarf for my wife.” He stopped his cart, grabbed Renard by the neck, and tossed him into the cart among the fish.

The moment the man’s back was turned, Renard began to throw those fish out onto the road, and when he had emptied the cart, he hopped off, too. When the man arrived home, he called, “Dear wife, come see what I have brought you.” When his wife looked into the cart, she said, “But husband, your cart is empty.” There was not a single fish — and no red fox, of course.

Renard, meantime, had gathered all the fish and was gobbling them up when along came Bruin on his way home. “Renard,” Bruin said, his eyes lighting up at the sight of those fish, “will you share your fish with me?”

“No,” Renard answered, slipping another fish down his throat. “We only share the food we gather when we work together. I fished all alone. You can fish for your own.”

Bruin’s eyes welled with tears and he looked at the frozen river. “But Renard,” he said sadly, his stomach rumbling with hunger, “how can I fish when the water is ice?”

“I’ll show you,” said Renard. He led Bruin down to the river and pointed to a hole in the ice. “I sat on the ice and stuck my tail through that hole. The fish are so hungry, they immediately grabbed my tail, but there were so many, I couldn’t drag them all up. There is plenty left for you in there, Bruin.”

Bruin shivered at the thought of that icy water, but he was very hungry, so he slipped and slid onto the ice. He sat down and stuck his tail into the freezing water. He waited for a while, but nothing happened. “Renard,” he called, “the fish aren’t biting.”

“Patience,” Renard called as he finished his feast. “As soon as one comes, the rest will follow.”

A moment later Bruin felt a little nip, and he shouted, “I feel a bite!” But in truth what he felt was the nip of the water as it began to freeze around his tail.

“Wait for three or four more bites,” Renard called in return. “Then you won’t have to fish again. I’ll wait back home to you.”

With that Renard trotted off toward the house where the man with the cart lived. When he came near, he called, “That big bear who stole your fish is caught by the tail in the ice. He’s down on the river.”

The man and his wife grabbed sticks and stones and ran toward the river. When Bruin saw them coming and heard them calling, “We’ll thrash you, nasty bear,” he tried to run away, but he was stuck fast to the ice. He pulled and pulled and finally wrenched himself free. The trouble was, he left behind three-quarters of his tail, and that is why bears have short tails to this day. And that is also why Bruin and Renard are no longer friends.

Renard — or Reynard, as folklorist Joseph Jacobs spells the name — is one of the most famous of folklore tricksters. In his notes to “European Folk and Fairy Tales,” Jacobs explains that hundreds of variants of the Renard tales exist. Renard’s friend and rivals vary from country to country. For instance, in Scandinavian versions of the tales, the bear is Renard’s opponent, while in other parts of Europe, the wolf appears as Renard’s dupe.

Other tricksters appear in folktales found throughout the world. Examples include Br’er Rabbit of the American Uncle Remus tales, and Anansi the Spider of West African origins.