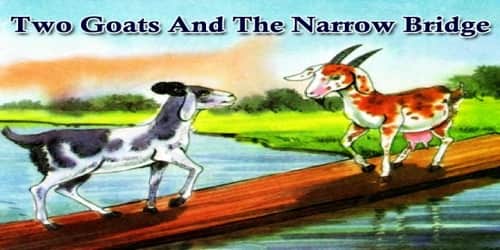 Two Goats And The Narrow Bridge

Once, two goats who were grazing on either side of the river wanted to cross the bridge at a time. But, the bridge was narrow to hold only one goat. Both the goats were so adamant to cross at the same time. This led to a quarrel among them. At the end, both fell into the stream and got drowned.

There were two other goats who wanted to cross the bridge. They both understood in nature. They were willing to adjust. One goat squatted on the bridge while the other crossed over this goat. After that goat had crossed, the goat which had squatted got up and walked across the bridge. Thus, both the goats crossed the bridge.

Moral of the story: ‘Pride leads to falling and patience always wins the heart.’