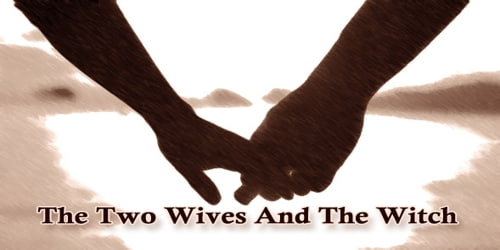 The Two Wives And The Witch

Long, long ago, there was a woman who was very sad. For she was not pretty and her husband did not like to look at her. How she wished that she were beautiful!

One day, her husband met another woman who was very pretty. This woman advised him to leave his first wife and marry her instead. So he did and left his home, leaving his first wife alone.

The poor women cried every day. She wondered what she had done that destiny was meting out such a cruel treatment to her. Nothing could bring joy to her. She yearned to hear his husband’s footsteps again but knew that he had left her forever.

One day as she was crying by the well, where she had gone for water, she heard the voice of a woman. She turned around to see a lovely woman standing before her.

“Why are you weeping?” asked the lady.

“My husband has left me and gone to live with another wife.” the poor wife replied.

“Why? Did you two quarrel?” asked the woman.

“No. He left me because I do not have a pretty face,” answered the wife.

The lovely woman touched the face of the wife with her hands and said, “That is so bad. But go home, dear. Everything will be alright. I must go too.”

The sad wife went back home, little knowing that the woman she had just met was a witch. She finished her daily chores and was about to sleep when she was startled to find a very beautiful woman standing in her room, staring at her. Soon she realized that she was standing before the mirror, staring at her own face that had magically changed into a countenance that could well be described as the prettiest in town.

Soon, news spread through the town that the plain woman in such and such a house had been transformed into a very beautiful woman. Many young men went to see the pretty woman, and all were pleased with her beauty.

Soon the bad husband came to the house. And how he was surprised to find that her plain wife was now a pretty woman, living alone by herself. He tried to persuade her into accepting him back into her life. But she would not listen to his entreaties. He promised never to leave her again and said,

“Now I understand that this miracle has happened only to bring me back to my senses. Even if you were your plain self, I would have wanted to come back to you. I promise that I will never make such a mistake again.”

The lady at first refused to believe him. But at last she said:

“If you will leave the woman who is now your wife and come to live with me right along I will take you for my husband.”

The man agreed, and the pretty wife took him back to her house.

When the other woman heard about all this, she became very angry. She had also heard about the transformation of the plain wife and how she was changed by a witch. All plain women of the town had already started to visit that well in the hope of meeting the witch someday in their lives. This woman went there too, for she hoped that the witch would make her even more beautiful than her husband’s first wife. She determined to try what the witch could do for her and went to get water at the same well. Once she reached there, she kept her pitcher by her side and began to cry loudly.

But the witch knew what was in her mind. While she made herself visible only to poor souls, she made an exception this time. She appeared before the woman and asked: “Why are you weeping, my good woman?”

The woman told her that her husband had gone away to live with the pretty woman. As she was speaking, the witch touched her face and said:

“Go home, my good woman, and do not weep, for your husband will come very soon to see you.”

Overjoyed, the woman ran home as fast as she could and shut her door. Then she took a deep breath and looked at her mirror.

But what was this? Gone was all her beauty. Was this her own face? Her nose was about two feet long, her ears looked like large handkerchiefs, and her eyes were as big as saucers.

Frightened, she ran back to her mother. But not even her own mother could recognize her. In fact, whoever saw her became afraid of such a creature. When she understood how ugly she was, she refused to eat, and in a few days, she died.