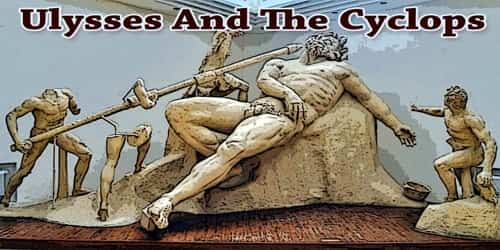 Ulysses And The Cyclops

Long ago, after the Trojan War, the great Greek king Ulysses began his journey home. He and his men had won the war, and they dreamed as they sailed off the cheering crowds who would greet them at home. Little did they know of the many trials that faced them still.

First, they stopped in the harbor of a hostile city where some of the soldiers were killed. Again they set sail, but a terrible storm assaulted them. Many of the sailors lost hope, but the brave Ulysses carried with him always the hope that he would return home and he carried also his character and his courage. In this way, he conquered many trials.

As time passed, the sun and relentless rolling waves worked still more hardship on the men. Some, dying of thirst, hallucinated strange and wondrous sights.

And then one day the sailors saw ahead of them a very real island. That night they reached the shore and were happy to find a stream of fresh water. They drank as if they had never before tasted the water.

Alas, across the way from this island they soon discovered, was another island, home to the monstrous Cyclopes. The men had heard tales of these lawless creatures with one eye in the center of their massive foreheads. No one had ever left the island of the Cyclopes alive.

“Never fear,” Ulysses said. As always, curiosity and hope moved him to act. “I want to see these creatures for myself,” he said.

Most of the men thought their king mad, but 12 brave sailors joined their leader in his quest.

When they reached the shore, the men set off in search of the Cyclopes and soon came to a huge cave. Ulysses stepped inside, and his men followed, and there they found a damp room, lighted only by the light of a blazing fire. Baskets of cheese lay all around, and the men gorged themselves as they listened to the sound of the bleating lambs in pens that lined the cave.

As they ate, they heard the footsteps of one of the Cyclopes returning home. They ran to hide among the stacks of wood and in the pens, among the lambs. And they trembled as this one Cyclops entered, herding his sheep into the cave. He was enormous, with hairy arms and clawed feet and that hideous unblinking eye in the center of his massive forehead.

The Cyclops heard and saw no one as he herded his sheep into their pens. Then he hauled a huge rock against the mouth of the cave, closing all inside.

At that moment, one man sneezed. The sound echoed.

The Cyclops’ eye roved until he spotted a leg. He yanked the sailor from his hiding place and, with one gulp, swallowed him. Now he searched, pulling men from every nook and cranny until the 11 remaining men stood lined up before him.

“Who are you?” asked the Cyclops. “How dare you enter my cave!”

Ulysses stepped bravely forward. “We come as friends,” he said, but the Cyclops brimmed with fury until Ulysses pulled a casket of wine from his sack. “We bring you gifts. My name is No-Man, and I offer you this wine.”

“I love wine!” the Cyclops cried, and he gulped the liquid down. Soon he yawned, his eyes closed, and he lay down and fell fast asleep. When he began to snore, Ulysses tiptoed to his side, pulled out his sword, and placed it against the giant’s heart. But he suddenly stopped. If he were to kill the giant, how would they ever escape? No man could move the boulder that held them inside.

But Ulysses used his wits. He found a long, narrow stick among the wood that he sharpened to a point and then put its tip into the fire. When the tip was red-hot, he dashed toward the giant and stabbed his eye, instantly blinding him.

The monster woke to howl in pain. “Help,” he cried, and the men could hear the other Cyclopes hurrying toward the cave. “No-Man is hurting me!” the Cyclops cried. And now the men understood how truly wise their king was.

Outside the Cyclopes were confused. “No man. Ah, all must be well,” they grumbled, and they walked back to their caves to sleep.

The blind Cyclops ran screaming from corner to corner until he came up with a cunning idea. He went to the front of the cave and removed the boulder. “Try to leave if you dare,” he challenged the men.

The men looked in horror at each other, but the sheep, freed from their pens, began to wander outside. As each sheep passed the Cyclops, he reached out and touched its back. “Only my sheep will be allowed to leave, and soon I will have you alone,” he cried.

Now wise Ulysses had another crafty idea. He crawled beneath a bigram, grabbed the fleece around its neck and gripped its body between his knees. He motioned for his men to do likewise with the other sheep. Then he raised himself from the ground and held tight as the ram walked toward the entrance. He waited for the others to do the same.

When the monster felt the sheep pass by, he touched only their backs and let them step outside.

One by one each of the men escaped this way. They hurried back to their boat and sailed away, and when they were safely at sea, Ulysses called, “Blind Cyclops, know who has blinded you! I am Ulysses, King of Ithaca, conqueror of Troy,” and the men continued on their journey.