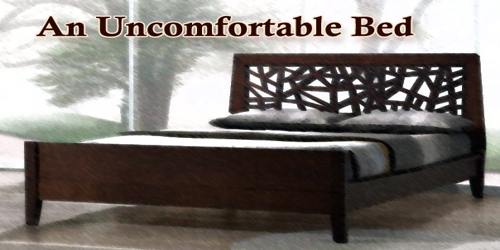 One autumn I went to spend the hunting season with some friends in a chateau in Picardy.

My friends were fond of practical jokes. I do not care to know people who are not.

When I arrived, they gave me a princely reception, which at once awakened suspicion in my mind. They fired off rifles, embraced me, made much of me as if they expected to have great fun at my expense.

I said to myself:

“Look out, old ferret! They have something in store for you.”

During the dinner, the mirth was excessive, exaggerated, in fact. I thought: “Here are people who have more than their share of amusement, and apparently without reason. They must have planned some good jokes. Assuredly I am to be the victim of the joke. Attention!”

During the entire evening, everyone laughed in an exaggerated fashion. I scented a practical joke in the air, as a dog scents game. But what was it? I was watchful, restless. I did not let a word, or a meaning, or a gesture escape me. Everyone seemed to me an object of suspicion, and I even looked distrustfully at the faces of the servants.

The hour struck for retiring, and the whole household came to escort me to my room. Why?

They called to me: “Good-night.” I entered the apartment, shut the door, and remained standing, without moving a single step, holding the wax candle in my hand.

“I heard laughter and whispering in the corridor. Without a doubt, they were spying on me. I cast a glance round the walls, the furniture, the ceiling, the hangings, and the floor. I saw nothing to justify suspicion. I heard persons moving about outside my door. I had no doubt they were looking through the keyhole.”

An idea came into my head: “My candle may suddenly go out and leave me in darkness.”

Then I went across to the mantelpiece and lighted all the wax candles that were on it. After that, I cast another glance around me without discovering anything. I advanced with short steps, carefully examining the apartment. Nothing. I inspected every article, one after the other. Still nothing. I went over to the window. The shutters, large wooden shutters, were open. I shut them with great care, and then drew the curtains, enormous velvet curtains, and placed a chair in front of them, so as to have nothing to fear from outside.

Then I cautiously sat down. The armchair was solid. I did not venture to get into the bed.

However, the night was advancing; and I ended by coming to the conclusion that I was foolish. If they were spying on me, as I supposed, they must, while waiting for the success of the joke they had been preparing for me, have been laughing immoderately at my terror. So I made up my mind to go to bed. But the bed was particularly suspicious-looking. I pulled at the curtains. They seemed to be secure.

All the same, there was danger. “I was going perhaps to receive a cold shower both from overhead or perhaps, the moment I stretched myself out, to find myself sinking to the floor with my mattress. I searched in my memory for all the practical jokes of which I ever had an experience.”

And I did not want to be caught. Ah! Certainly not! Certainly not! Then I suddenly bethought myself of a precaution which I considered insured safety. I caught hold of the side of the mattress gingerly and very slowly drew it toward me. It came away, followed by the sheet and the rest of the bedclothes. I dragged all these objects into the very middle of the room, facing the entrance door. I made my bed over again as best I could at some distance from the suspected bedstead and the corner which had filled me with such anxiety. Then I extinguished all the candles, and, groping my way, I slipped under the bedclothes.

For at least another hour I remained awake, starting at the slightest sound. Everything seemed quiet in the chateau. I fell asleep.

I must have been in a deep sleep for a long time, but all of a sudden I was awakened with a start by the fall of a heavy body tumbling right on top of my own, and, at the same time, I received on my face, on my neck, and on my chest a burning liquid which made me utter a howl of pain. And a dreadful noise, as if a sideboard laden with plates and dishes had fallen down, almost deafened me.

I was smothering beneath the weight that was crushing me and preventing me from moving. I stretched out my hand to find out what was the nature of this object. I felt a face, a nose, and whiskers. Then, with all my strength, I launched out a blow at this face. But I immediately received a hail of cuffings which made me jump straight out of the soaked sheets and rush in my nightshirt into the corridor, the door of which I found open.

Oh, heavens! It was broad daylight. The noise brought my friends hurrying into my apartment, and we found, sprawling over my improvised bed, the dismayed valet, who, while bringing me my morning cup of tea, had tripped over this obstacle in the middle of the floor and fallen on his stomach, spilling my breakfast over my face in spite of himself.

The precautions I had taken in closing the shutters and going to sleep in the middle of the room had only brought about the practical joke I had been trying to avoid.

Oh, how they all laughed that day!