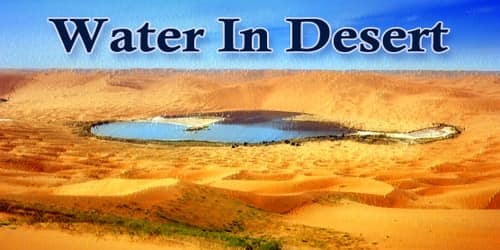 Once, a child was born in a Vaishya family, who was named Bodhisatva. The family had a flourishing business. When Bodhisatva grew up he began to help in the family business. Sometimes he had to go to other towns for business.

Once, Bodhisatva proceeded on a business trip along with other five hundred businessmen. They all had their bullock carts. The leader cart was leading in front and others were following him.

Slowly, the caravan reached the desert. Everywhere nothing except sandy landscape could be sighted. They all felt very tired after traveling such a long distance in the desert. As the sun was too hot it was difficult to move further.

Seeing all this, the chief of the caravan said, “Let us rest here for the day. We shall resume our journey in the evening. Then the weather will be fairly cool.”

All followed the instruction. They parked their bullock carts, gave fodder and water to the bulls and went to take rest.

In the evening the chief of the caravan called out, “O men, get ready for the journey. The city is not too far. We will reach in the morning.”

All got ready and bullock carts made a long queue one after the other. To lessen the weight on the bullock carts. They emptied the water vessel with the hope that they would fill the vessels with fresh water in the city. They were hopeful that there would be no desert further.

The caravan of bullock carts proceeded ahead. The carts were closely following one another. The chief was leading the caravan to the city.

They continued with their journey in the dark throughout the night without even realizing whether it was the right direction or not.

At the dawn, they realized that they had lost the path. They desperately decided to return to the same spot.

The sun was getting hotter as the caravan was searching for the place. Finally, they reached the same spot where they were the day before. They had already thrown the water they had with them. Now feeling too thirsty they desperately looked for water which was nowhere to be seen. The carts stopped in a circle. They were dying for water.

Seeing no other way, Bodhisatva decided to search for water in the desert. He was so determined that he wanted to dig a well for water. But his search went in vain. Then he began to look for a suitable spot where water could be found on digging. He moved further and found some cactus. It occurred to him that it was a suitable spot for digging, as cactus wouldn’t grow without underground water. Then, he asked a cart driver, “Friend, dig over here. Water is likely to be found at this spot.”

He started digging. After digging deep his spade struck a rock! He stopped digging and cried out, “There is a rock!”

Bodhisatva heard the digger and descended in the pit. Seeing the rock he went closer to it. Suddenly his eyes shone. He could hear a sound of water beneath the rock.

He came out of the pit and said to his friends, “If we do nothing, we are sure to die of thirst. I have heard water running under the rock. Let us try to break the rock at any cost. We will surely get water. We must have will power and courage. Let us try again with confidence.”

Suddenly, a youth stood up picked up the spade and descended down the pit. Seeing the youth Bodhisatva was hopeful for water.

The youth started hitting the rock with all his might and the broken and there came up a fountain of cold, sweet water. Seeing this, the people rushed towards the fountain and began to dance joyfully. They quenched their thirst. Bulls were also given water. All thanked Bodhisatva and proceeded on their journey.

Soon they reached the city. Thus, Bodhisatva with his determination and courage could save the lives of his companions. Moreover, that fountain of water became a place for travelers to quench their thirst and rest. The will power and courage are key to success.