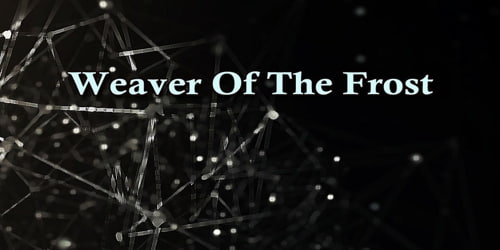 Weaver Of The Frost

One night, the beautiful Princess Miya of Moonland hopped on her pet rabbit, and together they galloped across the golden sea. When they reached Earth, Princess Miya spotted a field filled with beautiful tiny green insects.

Curious, Princess Miya dismounted and bowed before the insects. “Good day,” she said politely. “I am Princess Miya of Moonland, one of the weavers of the frost.”

The creatures were delighted at such a wonderful visitor. “We are the spinners of Insectland,” they said, bowing to her. “We gather threads from the grasses and spin, and we give our yarn to the web and cocoon makers. We have heard tales of the Mooland weavers. Your frost is dazzling.”

Soon Princess Miya was sharing stories with the insects, telling them tales of Moonland. Of course, the insects were excited, and some wished they could see the places Princess Miya described. But the insects knew the laws. No outsider could visit without the King of Moonland’s permission, and anyone who dared trespass would go to prison for life.

But one of the insects, a little boy with wings as delicate as bamboo and ruby eyes flecked with moonbeams, knew he had to see Moonland. Izpot, for that, was his name, hid in the rabbit’s tail while Princess Miya rode back home.

When Princess Miya discovered Izpot in the stable, she was terrified for him. Had she been less kind, she might have turned him into the king, but instead, she quickly spun a long, golden thread and led him to the edge of the moon. She dangled her thread over the edge. “Now climb home, quickly,” she whispered.

That’s just what Izpot did, but just then, one of the king’s spies grabbed Miya’s arm. “You have betrayed our laws,” he snarled, and he led her to the king.

Everyone loved Miya, including the king, but she had to be punished for breaking Moonland’s laws. “You must go to the Old Woman of the North,” the king said, trying to hide his sadness. “There you must spin 15 days of frost. If you fail, you may never return to Moonland.”

In silence, Princess Miya climbed upon her rabbit and began her sad journey. First, she rode to see the insects to explain what had happened.

“I must help you,” Izpot pleaded. “I am the reason you are punished. I must do something!”

“There is nothing to be done,” the princess said. And she looked at the others. “Please forgive Izpot. He was only curious. He meant no harm.”

And with that, she rode toward the mountains.

The Old Woman of the North was the ugliest woman imaginable, with a crooked, spotted nose, quivering gray lips, and eyes so deep and dark that no one could see into them. But uglier even than her face was her heart.

“There’s the loom,” she growled at Princess Miya, “and here’s your yarn.” And with that, she pulled out bundles of tangled, dirty yarn. These she flung at the princess. “Now weave. Remember, 15 days of frost or you will never go home.”

Miya examined the thread. “But I have only enough here for 14 days,” she said. “Please, give me more.”

“You’ll get no more,” the old woman snarled, for secretly she hoped to keep Princess Miya with her forever.

With a heavy heart, the princess began to untangle and wash the yarn. And then she sat at the broken, crooked loom and began to weave. At first, she used as little yarn as possible, but the frost she wove was so pitifully thin, it melted before sunrise.

For 10 days and nights, she wove frost, spreading it across the fields. “Oh, if only I had a little more thread,” she sighed, for she knew she would not have enough.

Suddenly, she heard a tiny voice from the corner. “Please, Princess, I want to help.”

She turned and, seeing Izpot, had an idea. “Can you bring me more thread?” she asked.

“I will!” he cried, and he quickly flew down the mountain and through the forest. When he reached home, he called to all the insects. “Come help!” he cried. In 10 seconds the fields were alive with spinners. Thousands of tiny insects swarmed into the forest of grass and chewed down stalks, splitting them and drawing out the thread, working dawn to dusk.

On the third evening, the army of spinners, bearing the thread in small bundles, poured out of the field and raced up the mountain. When they reached the loom, they unloaded their thread and watched as the princess spun this into yarn and wove the yarn into frost. This they helped her spread across the field.

And when the 15th day dawned, the fields were covered with frost as white as snow but delicate and patterned; it sparkled under the sunlight, as beautiful as the Fairy Queen’s veil.

When the King of Moonland looked down, he smiled. “Princess Miya is forgiven,” he said. “Instead of neglecting her work in her sorrow and loneliness, she kept working and created a most beautiful frost. We will not punish her any longer. No, we shall reward her. I will make her Queen of the Evening Star!”

And so, on the night of the next full moon, a Moonland rabbit leaped across the golden sea to fetch Princess Miya. The insects lined up on the beach to wave goodbye, calling out their thanks and praise. And she blew each one a kiss, especially Izpot.

And that is the story of the beautiful Moon Princess, Weaver of the Frost, who now shines brightly overhead as the Evening Star.