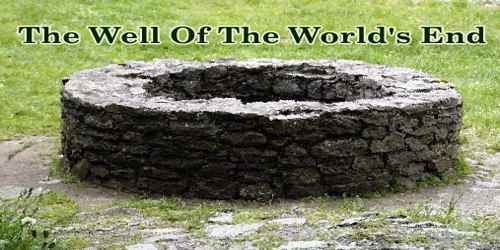 The Well Of The World’s End

One day the mother of a little girl named Lily suddenly died. Her father remarried, but Lily’s stepmother was as unkind as could be. The stepmother was forever giving Lily difficult tasks to do, treating her like a servant and feeding her scraps.

One day the stepmother decided she would send the child away for good. And so she picked up a sieve and handed it to Lily and said, “Go fill this from the Well of the World’s End, and if you do not succeed, never show your face in this home again!”

So Lily started on her journey, though of course she had no idea where to go. She asked everyone she met where she would find the Well of the World’s End, but they just shook their heads and shrugged and answered, “I don’t know.” And then suddenly, as sometimes happens, an old woman appeared and said, “There, take that path and you will find the Well of the World’s End.”

Naturally Lily was pleased, but then she remembered the sieve. “How on earth will I fill a sieve with water,” she asked a bird, and though the bird might have known the answer, he said not a word. And so, when Lily reached the well, she dipped her sieve into the water, but it ran out just as quickly as she could scoop it in.

She began to weep, but just then, as sometimes happens, a frog leaped into her lap and looked up at her and spoke. “If you promise to do whatever I ask for one whole day, I’ll tell you how to fill your sieve.”

Lily agreed at once.

“Stop it with moss and daub it with clay, and then it will carry the water away,” said the frog.

Lily collected moss and lined the sieve, and she dabbed clay on it, too. Sure enough, this time when she dipped it in, the water stayed.

“Don’t forget your promise,” the frog croaked as Lily skipped away.

“I won’t,” she sang as she ran happily home.

Well, when the stepmother saw the sieve full of the water from the Well of the World’s End, she was furious, and she began to concoct other plans, but just then they heard a tapping at the door and a voice cried out, “Remember the promise you made me.”

When the stepmother opened the door she saw a frog. “What on earth?” she cried, but Lily quickly told the story of the Well of the World’s End and of her promise to the frog.

The stepmother grinned wickedly. “Girls must keep their promises,” she said, and so Lily nodded. “I remember,” she said to the frog. “What do you wish?”

“Lift me up,” said the frog, “lift me onto your knee. Remember the promise you made to me.”

Lily shuddered. She wasn’t certain that she liked the notion of a slithery frog on her knee, but her stepmother said, “Do as he asks. Girls must keep their promises.” And so she did.

And then the frog looked up at Lily, and his great big eyes bulged as he said, “Give me some supper made especially by thee. Remember the promise you made to me.”

Again the stepmother grinned. “Girls must keep their promises,” she said. “Now go make the frog some supper.”

And so she did, and she fed the frog so well that soon his stomach bulged as much as his eyes.

“Take me to your bedroom quick as can be. Remember the promise you made to me.”

Well, Lily didn’t like this idea, but her stepmother smirked and said, “Girls must keep their promises,” and so Lily took the frog to her room and set him down to sleep as far away from her as she could.

At dawn she woke, and when she opened her eyes, the frog sat on her pillow.

“Kiss me; kiss me as quick as can be. Remember the promise you made to me.”

Now Lily shook her head, for she didn’t want to kiss a frog at all, but she remembered how well the frog had treated her at the Well of the World’s End, and she surely didn’t want to hurt him. At last she shut her eyes and kissed him quickly on top of his head. When she opened her eyes, there stood a handsome young prince.

“I was enchanted by a wicked magician, and I could not break the spell until a girl would do what I asked for one whole day and then kiss me at dawn. Now marry me, for I love you.”

When the stepmother saw the handsome prince and heard the news, she was amazed, but she consoled herself by telling her husband that all this luck his daughter married to a prince! Was thanks to her.