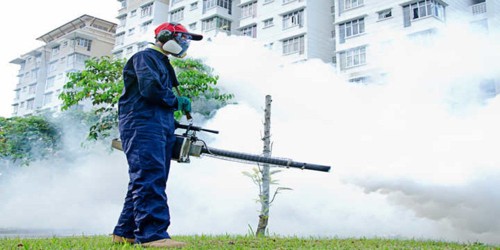 When the Wealth Authorities carried out Fogging against Mosquitoes

When the Wealth Authorities carried out Fogging against Mosquitoes –

Dengue fever is endemic in many regions throughout the world. Dengue fever is an ever-present threat in our country and often the health authorities carry out fogging to destroy the adult Aedes Egypti mosquitoes that carry the disease-causing virus. The aim of the mosquito fogging operations is to kill, or ‘knock-down’, any adult dengue mosquitoes that may be carrying the dengue virus. We heard that one of our neighbors was hospitalized with dengue fever. Periodic outbreak patterns are also highly influenced by seasonal climatic conditions.

Two uniformed men went round the houses informing the occupants that they were carrying out fogging in the area, including inside each house. everyone was to come out of their houses. Two other men, each armed with a fogging machine and wearing a gas mask, then proceeded to fog the area. The ‘fog’ is created by blasting the mixture of insecticide and water into very fine droplets through the fogging machine.  The type of insecticide being used in the fogger is also completely odorless.

The machines made a very loud wailing noise and produced huge amounts of smoke. The ‘mosquito fogger’ is a very large and noisy machine that is transported in the back of a truck. This smoke was the very substance that killed mosquitoes, or for that matter, many small insects that come in contact with it. It had a slightly pungent smell to it and we were advised not to breathe it in. After all, it killed mosquitoes and insects. It was definitely not good for us to breathe it in.  To reduce and control dengue outbreaks a number of actions need to be taken not only by public authorities but also by residents.

The men went from house to house fogging the compound and the inside of each house. As all the occupants had to come out, some elderly residents were helped out by younger ones. So for about half an hour, all the residents in our neighborhood stood or sat outside while they watch the men fog their houses. During that time, neighbors exchanged stories and news about the dengue situation and the victim who was still in the hospital. It was actually a bit of a social event for the residents.

The smoke dissipated after the men left. Then house by house, the occupants returned to their homes that would be free of mosquitoes for a day or so. The residual smell was tolerable. It was a change from having to put up with irritating mosquitoes on most days. The best methods of personal protection are to apply insect repellent and/or to wear long sleeves and long pants.

The mosquitoes become infected with the virus after biting and taking blood from someone who is sick with dengue. Fogging was an effective way of destroying mosquitoes but it did not eradicate them, for soon the larvae that were living in water would soon emerge as adult mosquitoes to bite and possibly endanger us once again.