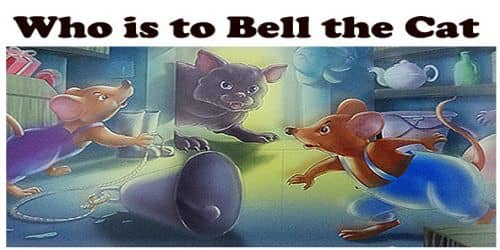 Who is to Bell the Cat

Once the house of a rich man was infested with rats. The house became like the Hamelin. There were rats everywhere. They were living there with great happiness and without any fear. They were having great fun and boldly moved about the house. But the inmates of the house were having great trouble. They could not have sound sleep, because, at night, the rats became more active. The rats enjoyed so much freedom that they started taking away foods, cutting clothes and making holes here and there. They also became so aggressive that they even attacked the little babies and bit their fingers and toes.

The owner of the house lost his patience. He wanted to get rid of the rats. He hit upon a plan. He knew that cats are enemies of rats. They kill rats wherever they find them. So one day the owner of the house brought a healthy cat to punish the unruly rats. The rats came to know of the presence of the cat in the house as the cat started its action immediately. It began to kill rats one by one. The rats were greatly frightened. They wanted to save their lives. To find out a way, they sat in a conference. After much discussion, they decided that they would tie a bell around the neck of the cat because this would warn the rats of the approach of the cat earlier. And thus they would be able to hide in a safer place. All the rats were very excited and welcomed the decision. But among the rats, there was an old wise rat. It stood up and said, “The plan is good. But the question is who will bell the cat. Anyone of us, that will approach the cat with a bell, will certainly lose its life.”

At this, all the rats became disappointed. No rat had the courage to approach the cat in order to tie a bell around its neck. So their plan failed. Eventually, the mice left the house and migrated to a different place.