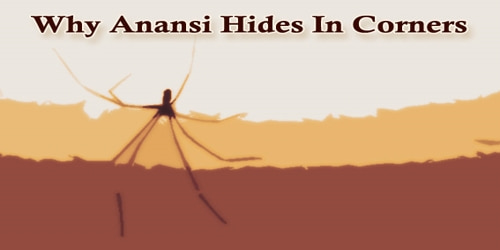 Why Anansi Hides In Corners

Anansi the Spider was a vain, mischievous creature, always swindling and hoodwinking others. Anansi was also rich, for he had tricked many creatures out of their homes and land. Chameleon wished with all his heart to take revenge on Anansi, for long ago Anansi had fooled him into giving up his farm, and Chameleon feared his family would soon starve.

And so Chameleon thought and thought. At last, he knew exactly what to do.

Chameleon crawled to the edge of one of Anansi’s huge fields and there began to dig. He dug and dug, and soon he had hollowed out a long tunnel. Next, he covered the hole with a roof made of dirt, leaving only the tiniest of openings.

“What are we doing, father?” Chameleon’s oldest son asked as they worked.

“You’ll soon see,” Chameleon answered, and before long, the young chameleons grinned in wonder, for from the vines covered with flies, Chameleon began to weave a glorious cloak. When he was finished, he wrapped himself in his creation and strode proudly into the village.

When the people saw Chameleon dressed in his cloak, they were amazed. The cloak shimmered and buzzed and flickered in the bright summer sunlight. “Your cloak is beautiful, Chameleon,” they cried. “It’s glorious! Dazzling! Remarkable!”

Before long, word of Chameleon’s cloak reached the chief. “I must have that cloak,” the chief declared. The chief wanted to own everything that was special.

One of the chief’s followers ran to Chameleon. “How much for your cloak?” the man asked, but Chameleon smiled and shook his head. “Not for sale,” he declared. And he marched proudly home.

“You won’t,” Chameleon said, “because it’s not for sale.”

“I’ll pay you anything your heart desires,” Anansi said, and Chameleon’s children began to wail. “Father, we’re hungry,” they cried. “Please sell the cloak to Anansi. Then we’ll be able to buy food.”

Chameleon looked at his sons, and then at Anansi, and then bowed his head. “All right, Anansi,” he said. “You win. I’ll sell you the cloak if you will give me enough food to fill my storehouse.”

“Show me the way,” Anansi said happily, and Chameleon led him to his hole.

When Anansi saw the tiny hole, he laughed. “I’ll fill that twice over in exchange for your cloak,” he announced, and so it was agreed.

The next day Anansi and his children, carrying loads of grain, arrived at Chameleon’s hole. They began to pour the grain into the hole, but no matter how much they poured, the hole always looked empty. They poured and poured, and Chameleon stood and watched. “Remember, Anansi,” he said, “you promised to fill it twice over.”

Anansi was puzzled, but he kept pouring. He brought more and more grain to the hole until; at last, his own storeroom was empty. Anansi stamped his feet all of his feet. “I will fill this hole!” he cried, and so he sold his cows and bought more grain. He poured that grain into Chameleon’s storehouse, and still, the hole looked empty.

At last, Chameleon said, “Well, Anansi, I think you’ve given me enough grain now. You haven’t kept your word, but I forgive you. You may have the cloak.”

Now Chameleon opened the box in which he kept the cloak, and Anansi reached in. But it had taken so long to fill the hole with grain that, while the cloak had rested inside the box, the vines had withered. When Anansi lifted up the cloak, the wind blew, and the vines crumbled, and all the flies escaped and flew away. Anansi held only a pile of ruined vines in his hands in all his hands.

All the villagers gathered around and laughed as hard as they had ever laughed, for at last Anansi the trickster had been tricked.

And ever since that day, Anansi has hidden in corners, afraid to show his face. All his pride flew away with those flies.