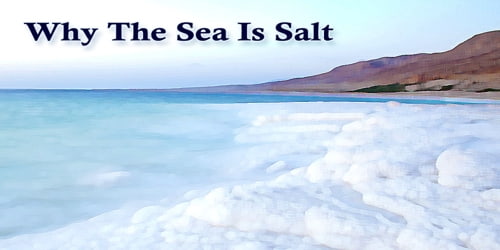 Why The Sea Is Salt

Once on a time, but it was a long, long time ago, there were two brothers, one rich and one poor. Now, one Christmas eve, the poor one hadn’t so much as a crumb in the house, either of meat or bread, so he went to his brother to ask him for something to keep Christmas with, in God’s name. It was not the first time his brother had been forced to help him, and you may fancy he wasn’t very glad to see his face, but he said:

“If you will do what I ask you to do, I’ll give you a whole flitch of bacon.”

So the poor brother said he would do anything and was full of thanks.

“Well, here is the flitch,” said the rich brother, “and now go straight to Hell.”

“What I have given my word to do, I must stick to,” said the other; so he took the flitch and set off. He walked the whole day, and at dusk, he came to a place where he saw a very bright light.

“Maybe this is the place,” said the man to himself. So he turned aside, and the first thing he saw was an old, old man, with a long white beard, who stood in an outhouse, hewing wood for the Christmas fire.

“Good even,” said the man with the flitch.

“The same to you; whither are you going so late?” said the man.

“Oh! I’m going to Hell if I only knew the right way,” answered the poor man.

“Well, you’re not far wrong, for this is Hell,” said the old man; “when you get inside, they will be all for buying your flitch, for meat is scarce in Hell; but, mind you don’t sell it unless you get the hand-quern which stands behind the door for it. When you come out, I’ll teach you how to handle the quern, for its good to grind almost anything.”

So the man with the flitch thanked the other for his good advice and gave a great knock at the Devil’s door.

When he got in, everything was just as the old man had said. All the devils, great and small, came swarming up to him like ants round an anthill, and each tried to outbid the other for the flitch.

“Well!” said the man, “by rights, my old dame and I ought to have this flitch for our Christmas dinner; but since you have all set your hearts on it, I suppose I must give it up to you; but if I sell it at all, I’ll have for it the quern behind the door yonder.”

At first the Devil wouldn’t hear of such a bargain and chaffed and haggled with the man, but he stuck to what he said, and at last the Devil had to part with his quern. When the man got out into the yard, he asked the old woodcutter how he was to handle the quern; and after he had learned how to use it, he thanked the old man and went off home as fast as he could, but still the clock had struck twelve on Christmas eve before he reached his own door.

“Wherever in the world have you been?” said his old dame; “here have I sat hour after hour waiting and watching, without so much as two sticks to lay together under the Christmas brose.”

“Oh!” said the man, “I couldn’t get back before, for I had to go a long way first for one thing, and then for another; but now you shall see what you shall see.”

So he put the quern on the table and bade it first of all grind lights, then a table-cloth, then meat, then ale, and so on till they had got everything that was nice for Christmas fare. He had only to speak the word, and the quern ground out what he wanted. The old dame stood by blessing her stars and kept on asking where he had got this wonderful quern, but he wouldn’t tell her.

“It’s all one where I got it from; you see the quern is a good one, and the mill-stream never freezes, that’s enough.”

So he ground meat and drink and dainties enough to last out till Twelfth Day, and on the third day, he asked all his friends and kin to his house and gave a great feast. Now, when his rich brother saw all that was on the table, and all that was behind in the larder, he grew quite spiteful and wild, for he couldn’t bear that his brother should have anything.

“It was only on Christmas eve,” he said to the rest, “he was in such straits that he came and asked for a morsel of food in God’s name, and now he gives a feast as if he were count or king;” and he turned to his brother and said:

“But whence, in Hell’s name, have you got all this wealth?”

“From behind the door,” answered the owner of the quern, for he didn’t care to let the cat out of the bag. But later on in the evening, when he had got a drop too much, he could keep his secret no longer, and brought out the quern and said:

“There, you see what has gotten me all this wealth;” and so he made the quern grind all kind of things. When his brother saw it, he set his heart on having the quern, and, after a deal of coaxing, he got it; but he had to pay three hundred dollars for it, and his brother bargained to keep it till hay-harvest, for he thought, if I keep it till then, I can make it grind meat and drink that will last for years. So you may fancy the quern didn’t grow rusty for want of work, and when hay-harvest came, the rich brother got it, but the other took care not to teach him how to handle it.

It was evening when the rich brother got the quern home, and the next morning he told his wife to go out into the hay-field and toss, while the mowers cut the grass, and he would stay at home and get the dinner ready. So, when dinner-time drew near, he put the quern on the kitchen table and said:

“Grind herrings and broth, and grind them good and fast.”

So the quern began to grind herrings and broth; first of all, all the dishes full, then all the tubs full, and so on till the kitchen floor was quite covered. Then the man twisted and twirled at the quern to get it to stop, but for all his twisting and fingering the quern went on grinding, and in a little while, the broth rose so high that the man was like to drown. So he threw open the kitchen door and ran into the parlor, but it wasn’t long before the quern had ground the parlor full too, and it was only at the risk of his life that the man could get hold of the latch of the house door through the stream of broth. When he got the door open, he ran out and set off down the road, with the stream of herrings and broth at his heels, roaring like a waterfall over the whole farm.

Now, his old dame, who was in the field tossing hay, thought it a long time to dinner, and at last, she said:

“Well! though the master doesn’t call us home, we may as well go. Maybe he finds it hard work to boil the broth, and will be glad of my help.”

The men were willing enough, so they sauntered homeward; but just as they had got a little way up the hill, what should they meet but herrings, and broth, and bread, all running and dashing, and splashing together in a stream, and the master himself running before them for his life, and as he passed them he bawled out: “Would to heaven each of you had a hundred throats! But take care you’re not drowned in the broth.”

Away he went, as though the Evil One were at his heels, to his brother’s house, and begged him for God’s sake to take back the quern that instant; for, said he:

“If it grinds only one hour more, the whole parish will be swallowed up by herrings and broth.”

But his brother wouldn’t hear of taking it back till the other paid him down three hundred dollars more.

So the poor brother got both the money and the quern, and it wasn’t long before he set up a farmhouse far finer than the one in which his brother lived, and with the quern the ground so much gold that he covered it with plates of gold; and as the farm lay by the sea-side, the golden house gleamed and glistened far away over the sea. All who sailed by, put ashore to see the rich man in the golden house, and to see the wonderful quern, the fame of which spread far and wide, till there was nobody who hadn’t heard tell of it.

So one day there came a skipper who wanted to see the quern, and the first thing he asked was if it could grind salt.

“Grind salt!” said the owner; “I should just think it could. It can grind anything.”

When the skipper heard that, he said he must have the quern, cost what it would; for if he only had it, he thought he should be rid of his long voyages across stormy seas for a lading of salt. Well, at first the man wouldn’t hear of parting with the quern; but the skipper begged and prayed so hard that at last he let him have it, but he had to pay many, many thousand dollars for it. Now, when the skipper had got the quern on his back, he soon made off with it, for he was afraid lest the man should change his mind; so he had no time to ask how to handle the quern, but got on board his ship as fast as he could, and set sail. When he had sailed a good way off, he brought the quern on deck and said:

“Grind salt, and grind both good and fast.”

Well, the quern began to grind salt so that it poured out like water; and when the skipper had got the ship full, he wished to stop the quern, but whichever way he turned it, and however much he tried, it was no good; the quern kept grinding on, and the heap of salt grew higher and higher, and at last down sunk the ship.

There lies the quern at the bottom of the sea and grinds away at this very day, and that’s why the sea is salt.