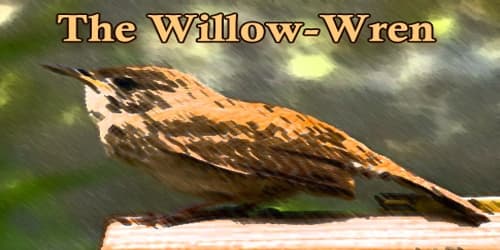 In former days every sound still had its meaning and application. When the smith’s hammer resounded, it cried, “Strike away! Strike away.” When the carpenter’s plane grated, it said, “Here goes! Here goes.” If the mill wheel began to clack, it said, “Help, Lord God! help, Lord God!” And if the miller was a cheat and happened to leave the mill, it spoke High German, and first asked slowly, “Who is there? Who is there?” and then answered quickly, “The miller! The miller!” and at last quite in a hurry, “He steals bravely! He steals bravely! Three pecks in a bushel.”

At this time the birds also had their own language which every one understood; now it only sounds like chirping, screeching, and whistling, and to some like music without words. It came into the bird’s mind, however, that they would no longer be without a ruler, and would choose one of themselves to be their King. One alone amongst them, the green plover, was opposed to this. He had lived free and would die free, and anxiously flying hither and thither, he cried, “Where shall I go? Where shall I go?” He retired into a solitary and unfrequented marsh and showed himself no more among his fellows.

The birds now wished to discuss the matter, and on a fine May morning they all gathered together from the woods and fields: eagles and chaffinches, owls and crows, larks and sparrows, how can I name them all? Even the cuckoo came, and the hoopoe, his clerk, who is so-called because he is always, heard a few days before him, and a very small bird which as yet had no name, mingled with the band. The hen, which by some accident had heard nothing of the whole matter, was astonished at the great assemblage. “What, what, what is going to be done?” she cackled; but the cock calmed his beloved hen, and said, “Only rich people,” and told her what they had on hand. It was decided, however, that the one who could fly the highest should be King. A tree-frog which was sitting among the bushes, when he heard that, cried a warning, “No, no, no! No!” because he thought that many tears would be shed because of this; but the crow said, “Caw, caw,” and that all would pass off peaceably. It was now determined that on this fine morning they should at once begin to ascend, so that hereafter no one should be able to say, “I could easily have flown much higher, but the evening came on, and I could do no more.” On a given signal, therefore, the whole troop rose up in the air. The dust ascended from the land, and there was tremendous fluttering and whirring and beating of wings, and it looked as if a black cloud was rising up. The little birds were, however, soon left behind. They could go no farther and fell back to the ground. The larger birds held out longer, but none could equal the eagle, who mounted so high that he could have picked the eyes out of the sun. And when he saw that the others could not get up to him, he thought, “Why shouldst thou fly still higher, thou art the King?” and began to let himself down again. The birds beneath him at once cried to him. “Thou must be our King, no one has flown so high as thou.” “Except me,” screamed the little fellow without a name, who had crept into the breast-feathers of the eagle. And as he was not at all tired, he rose up and mounted so high that he reached heaven itself. When, however, he had gone as far as this, he folded his wings together, and called down with clear and penetrating voice, “I am King! I am King.”

“Thou, our King?” cried the birds angrily. “Thou hast compassed it by trick and cunning!” So they made another condition. He should be King who could go down lowest in the ground. How the goose did flap about with its broad breast when it was once more on the land! How quickly the cock scratched a hole! The duck came off the worst of all, for she leaped into a ditch, but sprained her legs, and waddled away to a neighboring pond, crying, “Cheating, cheating!” The little bird without a name, however, sought out a mouse-hole, slipped down into it, and cried out of it with his small voice, “I am King! I am King!”

“Thou our King!” cried the birds still more angrily. “Dost thou think thy cunning shall prevail?” They determined to keep him a prisoner in the hole and starve him out. The owl was placed as a sentinel in front of it and was not to let the rascal out if she had any value for her life. When the evening has come all the birds were feeling very tired after exerting their wings so much, so they went to bed with their wives and children. The owl alone remained standing by the mouse-hole, gazing steadfastly into it with her great eyes. In the meantime, she, too, had grown tired and thought to herself, “You might certainly shut one eye, you will still watch with the other, and the little miscreant shall not come out of his hole.” So she shut one eye, and with the other looked straight at the mouse-hole. The little fellow put his head out and peeped, and wanted to slip away, but the owl came forward immediately, and he drew his head back again. Then the owl opened the one eye again, and shut the other, intending to shut them, in turn, all through the night.

But when she next shut the one eye, she forgot to open the other, and as soon as both her eyes were shut she fell asleep. The little fellow soon observed that and slipped away.

From that day forth, the owl has never dared to show herself by daylight, for if she does the other birds chase her and pluck her feathers out. She only flies out by night, but hates and pursues mice because they make such ugly holes. The little bird, too, is very unwilling to let himself be seen, because he is afraid it will cost him his life if he is caught. He steals about in the hedges, and when he is quite safe, he sometimes cries, “I am King,” and for this reason, the other birds call him in mockery, ‘King of the hedges’ (Zaunkönig). No one, however, was so happy as the lark at not having to obey the little King. As soon as the sun appears, she ascends high in the air and cries, “Ah, how beautiful that is! Beautiful that is! Beautiful, beautiful! Ah, how beautiful that is!”