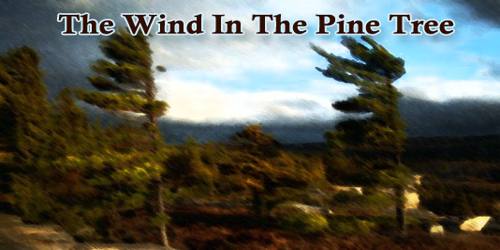 The Wind In The Pine Tree

It was a Deity from High Heaven that planted the Pine Tree.

So long ago that the crane cannot remember it, and the tortoise knows it only by hearsay from his great-grandmother, the heavenly deity descended. Lightly, lightly he came by way of the Floating Bridge, bearing the tree in his right hand. Lightly, lightly his feet touched the earth.

But the Pine Tree flourished. So great it grew, there was not a greater in all the Land of the Reed Plains. Its trunk was rosy red, and beneath it spread a brown carpet of fallen needles.

In the sweet nights of summer the Children of the Woods came hand in hand to the Pine Tree bymoonlight, slipping their slim dark feet upon the moss, and tossing back their long green hair.

Lovers wandering upon the beach at Takasaga would hear the great company of Spirits singing together.

“Joy of my heart,” they said to one another, “do you hear the wind in the Pine Tree?”

Poor souls lying sick a-bed would listen, and fishermen far out at sea would pause in their labour to whisper, “The wind, the wind in the Pine Tree! How the sound carries over the water!”

As for the coming of the Maiden, the crane cannot remember it, but the tortoise has it of his great-grandmother that she was born of poor parents in Takasaga. The Maiden was brown and tall and slender; in face and form most lovely. Her hair hung down to her knees. She rose at dawn to help her mother; she found sticks for the fire, she drew water at the well. She could spin and weave with the best; and for long, long hours she satand plied her wheel or her shuttle in the shade of the great Pine Tree, whilst her ears heard the sound of the wind in its branches. Sometimes her eyes looked out over the paths of the sea, as one who waits and watches. She was calm, not restless, more grave than gay, though she smiled not seldom. Her voice was the voice of a Heavenly Being.

Now concerning the Youth from the far province, of him the crane knows something, for the crane is a great traveler. She was flying over the streams and the valleys of the far province, so she says when she saw the Youth at work in the green rice-fields. The crane lingered, circling slowly in the bright air. The Youth stood up. He looked round upon the valleys and streams; he looked into the sky.

With that, he left the rice-field and bade farewell to his mother and his father and his sisters and his brothers and his friends. Altogether, they came down to the seashore, weeping and clinging to each other. The Youth took a boat and went away to sea, and the rest of them stood upon the beach.

On sped the boat for many a day over the unknown paths of the sea. And the white crane flew behind the boat. And when the wind failed, she pushed the boat forward with the wind of her strong wings.

At last, one evening about the hour of sunset, the Youth heard the sound of sweet singing. The sound came to him from the land, and it traveled over the paths of the sea. He stood up in his boat, and the crane beat her strong white wings and guided his boat to the shore till its keel touched the yellow sand of the sea-beach of Takasaga.

When the Youth had come ashore he pushed the boat out again with the waves and watched it drift away. Then he turned his face inland. The sound of music was still in his ears. The voice was like the voice of a Heavenly Being, and strange and mystical were the words of the song:

“The lover brought a love gift to his mistress,

Jewels of jade upon a silken string;

Green as the grass,

Upon a silken string.

The jewels know not one another,

The string they know,

Oh, the strength of the silken string!”

The Youth went inland and came to the great Pine Tree and to the Maid that sat beneath, weaving diligently and singing. The crane came flying with her strong white wings and perched upon the Tree’s topmost branches. The tortoise lay below on the brown carpet of needles. He watched and saw much with his little eyes, but he said nothing, being very silent by nature.

The Youth stood before the Maiden, waiting.

“Whence comes you?” she said, lifting up her eyes.

“And wherefore came you?”

“That you must know best, seeing it was your voice that sang in my heart.”

“Do you bring me the gift?” she said.

“Indeed, I bring you the complete gift, jewels of jade upon a silken string.”

“Come,” she said, and rose and took him by the hand. And they went to her father’s house.

So they drank the “Three Times Three,” and were made man and wife, and lived in sweet tranquility many, many years.

All the time the crane dwelt in the Pine Tree’s topmost branches, and the tortoise on the brown carpet of needles below.

At last, the Youth and Maiden, that once were, became white-haired, old, and withered, by the swift, relentless passage of years.

“Say not so, dear delight of my heart,” said the old woman; “say not so, the best of all is to come.”

“My dear,” said the old man, “I have a desire to see the great Pine Tree before I die, and to listen once more to the song of the wind in its branches.”

“Come, then,” she said, and rose and took him by the hand.

Old and faint and worn, with feeble, tottering steps, and hand in hand they came.

“I have it fast in mine. There, lie down, lie down, dear love; be still and listen to the wind in the Pine Tree.”

He lay on the soft brown bed beneath the Pine Tree’s boughs, and the wind sang.

She who was his love and his wife bent over him and sheltered him. And he suffered the great change.

Then he opened his eyes and looked at her. She was tall and straight and slender, in the face and form most lovely, and each of them was young as the gods are young. He put out his hand and touched her. “Your long black hair…” he said.

Once more she bade him, “Come.” Lightly they left the ground. To the sound of the wind’s music they swayed, they floated, they rose into the air. Higher they rose and higher. The branches of the Pine Tree received them, and they were no more seen.

Still, in the sweet nights of summer, the Children of the Woods come hand in hand to the Pine Tree by moonlight, slipping their slim dark feet upon the moss, and tossing back their long green hair.

Lovers wandering upon the beach at Takasaga hear the great company of Spirits singing together.

“Joy of my heart,” they say to one another, “do you hear the wind in the Pine Tree?”