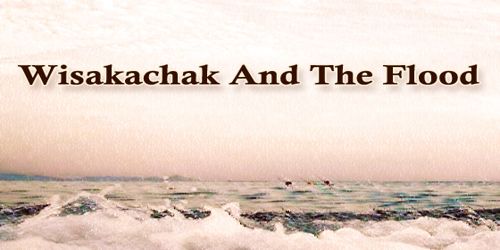 When the world was new, the Creator called to one of his mysterious creatures who was known as Wisakachak. “I have given you great powers,” said the Creator. “I want you to use these well. Watch over my creatures. Keep them safe and good, and do not let anyone quarrel or make trouble.”

Wisakachak listened and nodded, but he had plans. He was a trickster at heart, and loved to play tricks on others. After a while, after he had played many tricks, the Creator again called to him. “I’ll wash away this whole world if you continue to misbehave, Wisakachak. Stop setting creatures against each other. Stop making trouble, or you’ll be sorry.”

Wisakachak heard what the Creator said, but he was so pleased with his tricks, that he did not listen.

One day, Wisakachak decided the time had come to play a trick upon Beaver. All day long he worked, building a dam of heavy stakes across Beaver’s creek. In this way he planned to trap Beaver when he swam out of his lodge. When Beaver was trapped, he would tell him it was Muskrat who had built the dam, and Beaver and Muskrat would quarrel. While they were busy quarreling, Wisakachak would trap them. That was the sort of trick Wisakachak loved.

When he was finished with his job, Wisakachak sat in the reeds, waiting for the sun to set, the wind to rise. As the first star rose in the sky, Beaver swam out of his lodge, seeking deep water.

The trickster hid in the reeds and watched, but just as he was about to call to Beaver, Muskrat sneaked up behind him and bit the trickster on the leg. Wisakachak jumped and shrieked, and Beaver knew at once that it was the trickster who had built the dam and was trying to trap him. Beaver and Muskrat ran away and hid.

In the morning Wisakachak decided he would try to trick Muskrat. He began to break down the dam. He pulled out stakes and tossed them into the reeds, but as he did, water began to flow. It flowed and flowed in every direction. The water would not stop flowing.

As the water continued to rise, flooding the land, Wisakachak remembered the Creator’s words, and he feared this was the end of the world. He fretted and worried, for he had no power to create anything. He did have the power to expand what already existed, but now he knew that he could never save the world, for the water would not stop flowing.

Fearing for his life, Wisakachak pulled up trees and built a raft. He looked around and saw all the creatures swimming past. As they swam by, he reached down and placed them on his raft. He saved even Muskrat and Beaver.

For weeks the waters flowed until there was no land left anywhere. From their bobbing raft, the creatures watched as their world disappeared.

Wisakachak and Muskrat, Beaver, Deer and Fox, Wolf and Otter, Raven and Moose watched the world as it drowned. They longed for land. They called to the Creator to save them.

The Creator began to pity his creatures, and so he called to Wisakachak. “You have the power to remake the world if you use what exists under the water. Find the earth.”

Beaver at once dived from the raft. He swam deep, seeking land below the flood. He searched so long and dived so deep, he nearly drowned. At last he came up sputtering. “I cannot reach the earth,” he cried. “We’re lost.”

“I’ll find land,” Raven announced, and he flew into the sky. He flew north and south and east and west, always searching for the sight of land. But no matter how far he flew, he saw only water. His wings aching with exhaustion, Raven returned to the raft. “No land anywhere,” Raven said sadly.

Wisakachak looked around at all the animals. “Wolf,” he said, “will you dive into the water and seek land? You are brave and strong. Perhaps you can save us.”

Wolf, proud of his strength, dived into the water. Down, down, down he went, and as he swam, he smelled earth. He held his breath and swam deeper still, and suddenly he touched a small mound of moss. He tugged this from the bottom of the sea and swam as fast as he was able to the surface.

It spread over the raft, growing and growing, turning first into islands, then into great land masses. At last the whole world was formed again.

Some people say that it was Wisakachak who helped to re-create the world. They say he found a piece of wood and from this he forged trees; they say from bits of bone, he made new animals. They say he used his magic to make the world again.

But others say it was the Creator who remade the world, and they say he took away Wisakachak’s power over others, leaving him to play his tricks but without the power to destroy.