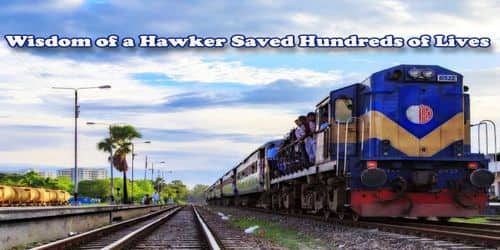 Wisdom of a Hawker Saved Hundreds of Lives

It was a foggy winter evening. The Intercity train, Padma left for Rajshahi from Shantahar railway station. The train is now half a kilometer away from Natore railway station. All on a sudden, a boy was found running towards the train waving a red flag in his hand. The train was rushing like a giant with hundreds of passengers on board. Seeing the boy, the train driver tried to control the speed of the train and the train was stopped instantly. At that time, the train driver came to him and asked the reason of his waving the flag.

The name of the boy was Munna who was a railway hawker. He moved from one station to another to sell his goods. He said that the rail line was disconnected at one place by some miscreants. As soon as he saw this he tore his own shirt, fixed it with the stick and started running towards the train waving it. Everyone was astonished at the ready wit of Munna. He not only saved the lives of hundreds of passengers but saved the government and public property also. All the people thanked him profusely. The railway authority declared a handsome amount of money as a prize for Munna.