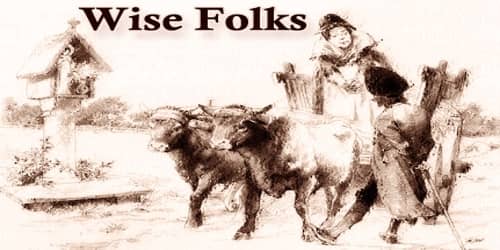 One day a peasant took his good hazel-stick out of the corner and said to his wife, “Trina, I am going across country, and shall not return for three days. If during that time the cattle-dealer should happen to call and want to buy our three cows, you may strike a bargain at once, but not unless you can get two hundred thalers for them; nothing less, do you hear?” “For heaven’s sake just go in peace,” answered the woman, “I will manage that.” “You, indeed,” said the man. “You once fell on your head when you were a little child, and that affects you even now; but let me tell you this, if you do anything foolish, I will make your back black and blue, and not with paint, I assure you, but with the stick which I have in my hand, and the coloring shall last a whole year, you may rely on that.” And having said that, the man went on his way.

The next morning the cattle-dealer came, and the woman had no need to say many words to him. When he had seen the cows and heard the price, he said, “I am quite willing to give that, honestly speaking, they are worth it. I will take the beasts away with me at once.” He unfastened their chains and drove them out of the byre, but just as he was going out of the yard-door, the woman clutched him by the sleeve and said, “You must give me the two hundred thalers now, or I cannot let the cows go.” “True,” answered the man, “but I have forgotten to buckle on my money-belt. Have no fear; however, you shall have security for my paying. I will take two cows with me and leave one, and then you will have a good pledge.” The woman saw the force of this, and let the man go away with the cows, and thought to her, “How pleased Hans will be when he finds how cleverly I have managed it!”

The peasant came home on the third day as he had said he would, and at once inquired if the cows were sold? “Yes, indeed, dear Hans,” answered the woman, “and as you said, for two hundred thalers. They are scarcely worth so much, but the man took them without making any objection.” “Where is the money?” asked the peasant. “Oh, I have not got the money,” replied the woman; “he had happened to forget his money-belt, but he will soon bring it, and he left good security behind him.” “What kind of security?” asked the man. “One of the three cows, which he shall not have until he has paid for the other two. I have managed very cunningly, for I have kept the smallest, which eats the least.” The man was enraged and lifted up his stick, and was just going to give her the beating he had promised her. Suddenly he let the stick fail and said, “You are the stupidest goose that ever waddled on God’s earth, but I am sorry for you. I will go out into the highways and wait for three days to see if I find anyone who is still stupider than you. If I succeed in doing so, you shall go scot-free, but if I do not find him, you shall receive your well-deserved reward without any discount.”

He went out into the great highways, sat down on a stone, and waited for what would happen. Then he saw a peasant’s wagon coming towards him, and a woman was standing upright in the middle of it, instead of sitting on the bundle of straw which was lying beside her, or walking near the oxen and leading them. The man thought to himself, “That is certainly one of the kind I am in search of,” and jumped up and ran backward and forwards in front of the wagon like one who is not very wise. “What do you want, my friend?” said the woman to him; “I don’t know you, where do you come from?” “I have fallen down from heaven,” replied the man, “and don’t know how to get back again, couldn’t you drive me up?” “No,” said the woman, “I don’t know the way, but if you come from heaven you can surely tell me how my husband, who has been there these three years, is. You must have seen him?” “Oh, yes, I have seen him, but all men can’t get on well. He keeps sheep, and the sheep give him a great deal to do. They run up the mountains and lose their way in the wilderness, and he has to run after them and drive them together again. His clothes are all torn to pieces too, and will soon fall off his body. There is no tailor there, for Saint Peter won’t let any of them in, as you know by the story.” “Who would have thought it?” cried the woman, “I tell you what, I will fetch his Sunday coat which is still hanging at home in the cupboard, he can wear that and look respectable. You will be so kind as to take it with you.” “That won’t do very well,” answered the peasant; “people are not allowed to take clothes into Heaven, they are taken away from one at the gate.” “Then hark you,” said the woman, “I sold my fine wheat yesterday and got a good lot of money for it, I will send that to him. If you hide the purse in your pocket, no one will know that you have it.” “If you can’t manage it any other way,” said the peasant, “I will do you that favor.” “Just sit still where you are,” said she, “and I will drive home and fetch the purse, I shall soon be back again. I do not sit down on the bundle of straw, but stand up in the wagon, because it makes it lighter for the cattle.” She drove her oxen away, and the peasant thought, “That woman has a perfect talent for folly, if she really brings the money, my wife may think herself fortunate, for she will get no beating.”

It was not long before she came in a great hurry with the money, and with her own hands put it in his pocket. Before she went away, she thanked him again a thousand times for his courtesy.

When the woman got home again, she found her son who had come in from the field. She told him what unlooked-for things had befallen her, and then added, “I am truly delighted at having found an opportunity of sending something to my poor husband. Who would ever have imagined that he could be suffering for want of anything up in heaven?” The son was full of astonishment. “Mother,” said he, “it is not every day that a man comes from Heaven in this way, I will go out immediately, and see if he is still to be found; he must tell me what it is like up there, and how the work is done.” He saddled the horse and rode off with all speed. He found the peasant who was sitting under a willow-tree and was just going to count the money in the purse. “Have you seen the man who has fallen down from Heaven?” cried the youth to him. “Yes,” answered the peasant, “he has set out on his way back there, and has gone up that hill, from whence it will be rather nearer; you could still catch him up if you were to ride fast.” “Alas,” said the youth, “I have been doing tiring work all day, and the ride here has completely worn me out; you know the man, be so kind as to get on my horse, and go and persuade him to come here.” “Aha!” thought the peasant, “here is another who has no wick in his lamp!” “Why should I not do you this favor?” said he, and mounted the horse and rode off in a quick trot.

The youth remained sitting there till night fell, but the peasant never came back. “The man from Heaven must certainly have been in a great hurry, and would not turn back,” thought he, “and the peasant has no doubt given him the horse to take to my father.” He went home and told his mother what had happened, and that he had sent his father the horse so that he might not have to be always running about. “Thou hast done well,” answered she, “thy legs are younger than his, and thou canst go on foot.”

When the peasant got home, he put the horse in the stable beside the cow which he had as a pledge, and then went to his wife and said, “Trina, as your luck would have it, I have found two who are still sillier fools than you; this time you escape without a beating, I will store it up for another occasion.” Then he lighted his pipe, sat down in his grandfather’s chair, and said, “It was a good stroke of business to get a sleek horse and a great purse full of money into the bargain, for two lean cows. If stupidity always brought in as much as that, I would be quite willing to hold it in honor.” So thought the peasant, but you no doubt prefer the simple folks.