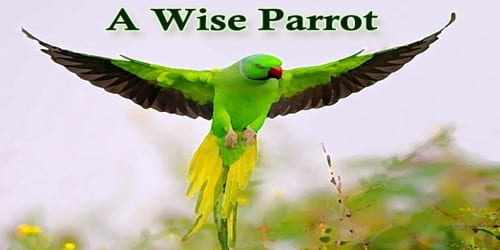 Once upon a time, there lived a parrot in a forest. He was very handsome. His beak and wings were very beautiful. His younger brother also lived with him. Both were living happily in the forest.

One day, a hunter came to the forest. He saw the pair of the parrots and thought, ‘These parrots are very beautiful and special. I will present them to the king,’ He spread his net in the jungle to catch them. Soon both the parrots were trapped.

He kept them in a cage and went to the place. He said to the king, “O king, see this beautiful pair of parrots. I caught them in the deep forest. Seeing their beauty I decided to bring them to you. They will add to the beauty of your palace.”

The king was very happy. He gave one thousand coins to the hunter. He kept both the parrots in a golden cage and ordered his servants to look after them well.

The parrots were looked after very well. They were treated as very important birds in the palace. They were served fruits and delicious food. They became the center of attraction. Even the young prince came to play with them. The parrots were very happy. They got everything without any labor. The older parrot once said to his brother, “We are highly respected in the palace and hence, quite satisfied.”

The younger brother replied, “You are right, we are getting the royal treatment. It is our luck.”

One day, a hunter brought a black monkey named Kala Bahu. The monkey was presented to the king, who asked the attendants to keep the monkey in the courtyard. The kings, as well as the prince, were very happy to see the monkey and his amusing activities. Soon the monkey became the center of attraction.

With the arrival of the monkey, the parrots were neglected. They sometimes did not even get food. Both of the parrots knew the cause of it. The older parrot was wise and hoped that the days would change again and one should not be depressed. He comforted his brother, “Nothing is permanent in this world. Have patience till the bad days are over.”

One day the monkey performed such feats before the prince that he got scared and cried, “Help! Help!” Hearing his cries all rushed there and took the prince away. When the king came to know about it, he ordered his men to leave the monkey in the forest. The next day, the monkey was sent to the forest.

The bad days of the parrots were now over. They were treated well again. Good dishes and fruits were also served to them. They again became the center of attraction.

The wise parrot clarified the situation to his younger brother saying that time never remains the same, and one should not be depressed by the temporary unfavorable changes. The young parrot also realized the fact that nothing is permanent in the world and one should never lose patience.