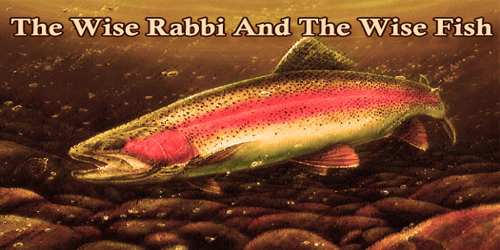 The Wise Rabbi And The Wise Fish

Long ago in the city of Rome, the Jews who lived there studied the Torah, their sacred scriptures, every day. They loved their studies and cherished all they learned, for it gave them wisdom and hope and life. The academies and study halls brimmed with laughter, conversation, and questions. Even for those who toiled hard for their living and had little to eat, the Torah brought great joy.

So the authorities issued a decree. “No one is permitted to study the Torah,” they wrote. Messengers traveled throughout the city, reading the decree to all the rabbis and scholars in Rome.

“Anyone caught studying the Torah will pay with his life,” they said.

The rabbis and scholars, saddened though they were by this news, closed their study halls and hid their Torahs. The dark days of winter seemed darker, but they refused to risk their people’s lives.

All the rabbis and scholars refused to risk their people’s lives, that is, except one man whose name was Rabbi Akiba. Instead of obeying the decree, Rabbi Akiba began to travel around establishing new places of study, opening the doors to all who wished to read the Torah. He visited every home and urged people to study the Torah again.

One day, as he was walking through a village outside the city walls, another rabbi stopped him on the road. “You must not do this,” the rabbi said. “You risk your life. If the authorities find out what you are doing, they will punish you severely, and they will punish those who follow your advice. Do you not fear the authorities, Rabbi Akiba? I fear for our people’s lives, and for yours.”

“I do not fear them,” said Rabbi Akiba.

“But you must be afraid! The authorities are serious. I am sure of that.”

“How can you say that?” the rabbi asked. He was trembling as he spoke, but Rabbi Akiba only smiled again and said, “I will tell you a story that may help you understand. Come with me.”

He led the rabbi by the hand toward the shore of a nearby lake, and there Rabbi Akiba pointed at the water. “I will tell you the story of the fox and the fish,” he said.

There was once a fox who walked along the shore of this lake, just as you and I do now. He looked down and saw the fish swimming this way and that through the water. His mouth began to water with hunger, for foxes do love to eat, and he hoped to trick the fish into his mouth.

And so the fox looked down and spoke to the fish. ‘Why are you swimming so frantically?’ the fox asked them.

‘We are swimming from the fishermen’s nets,’ replied the fish. When he heard this, the fox had an idea. He crouched down at the water’s edge and said, ‘Come ashore and you will be safe from the nets. We will live with each other. I will teach you how to live onshore as my brothers and sisters.’

The rabbi looked at Rabbi Akiba, wondering what the story of the fox and the fish could have to do with anything. “I don’t understand,” he said.

“Do you think those fish jumped out of the water?” asked Rabbi Akiba.

“But fish can’t live on land,” the rabbi said.

“Exactly,” Rabbi Akiba said. “And the fish were wise enough to ignore the sly invitation. They looked him in the eye and told him, ‘We are not so foolish as you believe us to be. If we are in fear for our lives here in the water where we can live and breathe, imagine how terrible life would be for us on land where we cannot breathe.’”

“You have told me a parable, Rabbi Akiba. I think I understand.”

Rabbi Akiba again smiled. “Tell me, then, what have you learned?”

“We fear our enemies here when we study the Torah, but if we abandon our study, which gives us hope and life, we will be more fearful still.”

And so the two rabbis walked together through the villages and towns, and together they opened the academies’ doors and once again the people studied the Torah.