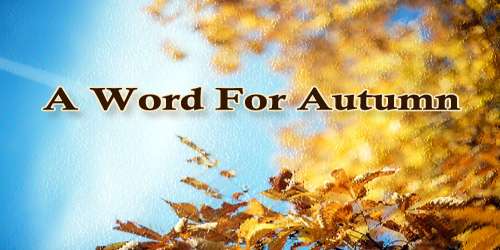 A Word For Autumn

Last night the waiter put the celery on with the cheese, and I knew that summer was indeed dead. Other signs of autumn there may be the reddening leaf, the chill in the early-morning air, the misty evenings but none of these comes home to me so truly. There may be cool mornings in July; in a year of drought the leaves may change before their time; it is only with the first celery that summer is over.

I knew all along that it would not last. Even in April, I was saying that winter would soon be here. Yet somehow it had begun to seem possible lately that a miracle might happen, that summer might drift on and on through the months a final upheaval to crown a wonderful year. The celery settled that. Last night with the celery autumn came into its own.

There is a crispness about celery that is of the essence of October. It is as fresh and clean as a rainy day after a spell of heat. It crackles pleasantly in the mouth.

A week ago (“A little more cheese, waiter”) a week ago I grieved for the dying summer. I wondered how I could possibly bear the waiting the eight long months till May. In vain to comfort myself with the thought that I could get through more work in the winter undistracted by thoughts of cricket grounds and country houses. In vain, equally, to tell myself that I could stay in bed later in the mornings. Even the thought of after-breakfast pipes in front of the fire left me cold.

But now, suddenly, I am reconciled to autumn. I see quite clearly that all good things must come to an end. The summer has been splendid, but it has lasted long enough. This morning I welcomed the chill in the air; this morning I viewed the falling leaves with cheerfulness; and this morning I said to myself, “Why, of course, I’ll have celery for lunch.” (“More bread, waiter.”)

“Season of mists and mellow fruitfulness,” said Keats, not actually picking out celery in so many words, but plainly including it in the general blessings of the autumn. Yet what an opportunity he missed by not concentrating on that precious root. Apples, grapes, nuts, and vegetable marrows he mentions specially and how poor a selection! For apples and grapes are not typical of any month, so ubiquitous are they, vegetable marrows are vegetables pour rire and have no place in any serious consideration of the seasons, while as for nuts, have we not a national song which asserts distinctly, “Here we go gathering nuts in May?” Season of mists and mellow celery, then let it be. A pat of butter underneath the bough, a wedge of cheese, a loaf of bread and Thou.

How delicate are the tender shoots unfolded layer by layer. Of what whiteness is the last baby one of all, of what a sweetness his flavor. It is well that this should be the last rite of the meal finis coronat opus so that we may go straight on to the business of the pipe. Celery demands a pipe rather than a cigar, and it can be eaten better in an inn or a London tavern than in the home. Yes, and it should be eaten alone, for it is the only food which one really wants to hear oneself eat. Besides, in company one may have to consider the wants of others. Celery is not a thing to share with any man. Alone in your country inn you may call for the celery; but if you are wise you will see that no other traveler wanders into the room. Take warning from one who has learnt a lesson.

One day I lunched alone at an inn, finishing with cheese and celery. Another traveler came in and lunched too. We did not speak I was busy with my celery. From the other end of the table he reached across for the cheese. That was all right! it was the public cheese. But he also reached across for the celery my private celery for which I owed. Foolishly you know how one does I had left the sweetest and crispest shoots till the last, tantalizing myself pleasantly with the thought of them. Horror! To see them snatched from me by a stranger. He realized later what he had done and apologized, but of what good is an apology in such circumstances? Yet at least the tragedy was not without its value. Now one remembers to lock the door.

Yes, I can face the winter with calm. I suppose I had forgotten what it was really like. I had been thinking of the winter as a horrid wet, dreary time fit only for professional football. Now I can see other things crisp and sparkling days, long pleasant evenings, cheery fires. Good work shall be done this winter. Life shall be lived well. The end of the summer is not the end of the world. Here’s to October and, waiter, some more celery.