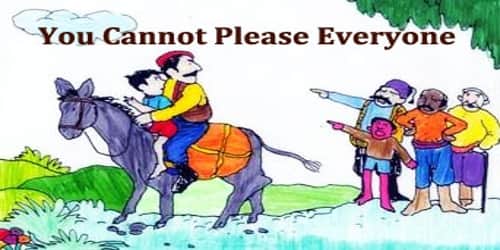 You Cannot Please Everyone

Bashir a 40-year-old man was a cloth vendor. He used to sell different types of clothes in nearby towns and villages. He used to carry the cloth bags on top of his donkey. He took his 15 years old son along with him to a nearby town. The donkey carried two bags and all the clothes were sold. Both father and son were happy. After having a huge business and lump sum profit, Bashir was happily returning home with his son and his donkey. They were very tired and find it too hard to reach their place. All the three walked slowly on their way back home. Two men saw them very tired.

They spoke to themselves, ‘See they are very tired and exhausted it seems. They have a donkey, why not any one of them can sit in that donkey? Fools, they find it difficult to walk and still don’t use the donkey!’ The father and son heard the two men having a conversation about them and son asked his father to sit on the donkey. He agreed and sat on the donkey.

Another stranger shouted at Bashir’s son, ‘Hey you are too young, can’t you walk? You made your father walk behind you? Get down now!’

Bashir and his son were confused and did not know what to do. They both decided to sit on the donkey. The donkey was unable to walk carrying a heavyweight on his back. Another man saw them at a distance and rushed towards them.

He shouted at Bashir and his son, ‘Are you mad? How the donkey can carry you both? Can’t you walk? Why are you hurting this animal?’ Bashir and the boy were stunned and remained speechless for a while.