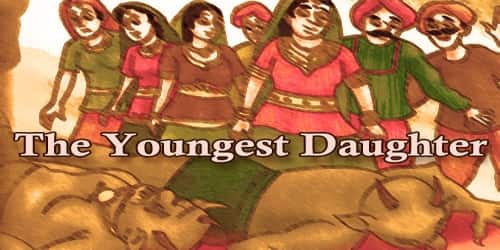 Once in a village near a desert, there was a huge mansion with seven doors. The mansion belonged to a rich woman and her three daughters. Every night, the woman would instruct her daughters to lock all the seven doors properly. “Be careful, girls,” she would warn them. “Even if a single door is left open, the demons living in the desert will find their way into our mansion!”

The two ferocious demons had been terrorizing the villagers by attacking them in their homes. So, people would keep their doors locked and windows closed, especially during the nights.

The rich woman had to look not one, but seven doors! So, she had assigned the duty to her three daughters, who would each take turns to lock the seven doors at night.

One night, it was the youngest daughter’s turn, which had been working outdoors all day and was very tired. After dinner, all the others retired to their chambers while the youngest one began locking the doors, one by one. By the time she locked the sixth door, she was completely exhausted. She forgot to lock the seventh door and went to sleep.

That night, one of the demons noticed the door open a barged in. “Dhum! Dhum!” came the sound as he walked into the hall. The mother woke up with a start and began to shout at her youngest daughter, “It’s your mistake, you left the door open!”

The demon caught hold of the youngest daughter, put her into a large sack and carried her away. “I will take this girl to my house!” he roared.

“She will cook for me and keep the cave clean.”

After a while, he returned, picked up the sack, and went home. As soon as he opened the sack, he was in for a shock! “Where has the girl gone?” thundered the demon.

Actually, the clever girl had escaped from the sack while the demon had gone to meet his friend. In her place, she had placed rocks inside the sack. The demon was mad with anger. “I shall bring her back!” he screamed, rushing back to the girl’s house.

Meanwhile, the girl had safely returned home and made a plan wither sister and mother to get rid of the demon. When the demon arrived, the girl hid inside the house while her sisters began to wail loudly, “Poor girl! She escaped from one demon but was caught by the other!” Hearing this, the demon was furious, “So, it is the other demon that has snatched her away from me!” He rushed to the other demon’s cave and attacked him.

In a terrible fight, they both killed each other. Thus, the youngest daughter saved, not only herself and her family, but also freed her village from the wicked demons.