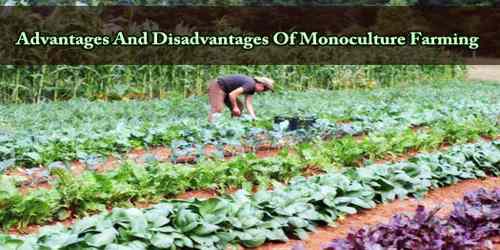 Advantages And Disadvantages Of Monoculture Farming

Monoculture farming means that on a given agricultural land is grown only one species of a crop at a time. If two or more species are sown in the field together (for example beans and corn), it is not a monoculture but a polyculture system. It allows the farmer to plant in an effective way and also to harvest with excellence.

A great example is the growth of only corn or beans for the entire planting season. However, it also increases the risk of exposure to pests and diseases. Monoculture, in contemporary agricultural understanding, emphasizes crop specialization as it involves the growing of a single crop utilizing the majority or whole of the land.

Today, Monoculture is very popular not only in an industrialized agricultural area but also in the organic agricultural field. But instead of its growing popularity, some risks are there in bringing this practice into action.

Examples of monoculture crops include corn, wheat, rice, clover, cotton. It also includes tea, coffee, different types of fruits, and rubber trees. Experts are of the view that monoculture farming is more of a curse than boon, particularly after the Irish Potato Famine of 1845. Along with its added benefits over traditional farming, it comes with its own set of dangers and risks.

Monoculture farming helps to keep down farming costs down, Farmers yield more output in less resource. Makes management pretty easy, machines and various methods can be utilized more efficiently and systematically. Let’s have a look at the other benefits or advantages of monoculture farming:

Simplicity – Monocultures are very simple farming and agricultural systems. It primarily involves soil preparation, irrigation, and the input of chemicals where needed all focused on the preferences of one particular plant species. As such, the fields are significantly specialized towards the maximum production of yields from the specific crop.

Treating pests and diseases is also made without considering the effects of the treatment on other plants as there are none. Also, during harvesting, monocultures provide uniformity as it is easy to collect the desirable parts of the plant through straightforward techniques, which would otherwise be destructive if the crop was sharing the same field with others.

Makes Cultivation Easier – Monoculture simplifies the process of cultivation. Without any extra effort, the crop of Monoculture grows with minimal care. Because it needs a single technique for the preparation of soil, the same is also holds good for pest control and irrigation.

Results in higher yields – For monoculture farming, each plant goes through the same standardized planting, maintenance, and harvesting process. It, therefore, results in higher yields and lower costs. For animals or livestock, they go through the same procedure of birth, development, and maturity. The process also results in lower costs on the part of the farmer as well as excellent yields when the animals become mature.

Lowers the amount of extra land required – The plants specifically, use synthesized fertilizers, reducing the amount of additional land needed to produce food. The animals, at the same time, would require the same fertilization mechanisms.

It is efficient and more profitable to the farmer – When one distinct crop is grown at the same time, it means only one method of harvesting will be needed. It is efficient and more profitable for the farmer. Crops best-suited for a field can be planted against harsh climatic conditions like drought, winds, and short growing seasons, favoring the crop and thus having less impact on the yield. The form of agriculture is common for growing wheat, vegetables, barley or unique species of fruit in vast fields.

With the increasing evidence of pollution caused by modern agriculture, decreasing soil fertility, and the spread of pests, monoculture farming gets a lot of bad rap. Single crop farming is blamed for destroying natural defenses of lands, thus negatively affecting the resilience of ecosystems. Additionally, as many studies confirm, monoculture itself doesn’t always promise the best harvest.

Let’s have a look at some disadvantages of monoculture farming:

Additionally, this also keeps the soil nutrients replenished and in balanced form. Monoculture disturbs this natural stability. The assortment of similar species of plants in a single area strips the nutrients with a negative impact on the underlying soil structure.

Another commonly seen problem is erosion. Fields used for monoculture farming are often left for many weeks uncovered with no vegetation protecting soils from early spring snow thaw. Or they have too large spacing between rows exactly when those fierce summer thunderstorms hit in. The lack of natural vegetation cover largely contributes to soil erosion by water and wind, allowing fertile topsoil to be easily removed and deposited elsewhere.

Results in the use of harmful chemicals – With the nutrients in the soil eliminated, farmers have to introduce artificial products that could replicate the functions and nutrients lost like the introduction of large amounts of herbicides, fertilizers, bactericides, and insecticides.

These synthetic chemicals are used to prevent further damage to their crops by harmful insects, bacteria, and weeds. Unfortunately, the chemicals leave traces in crops meant for human consumption, meaning they end up in the food chain and could result in serious health consequences due to bio-accumulation.

Pollutes groundwater supplies – Even if the plant is harvested, the chemicals remain in the soil. Since they are inorganic, they cannot be processed by microorganisms in the soil into organic matter. They leach through the ground and eventually pollute groundwater supplies and altering ecosystems that may be great distances away from the location of use. In the long-run, the chemicals may kill, harm, or deplete the diversity and vibrancy of neighboring ecosystems.

Pollutes the environment and contributes to climate change – Increased runoff from monocultures is the main cause of excessive algal blooms in water bodies that pollute drinking water supplies, kill sensitive aquatic species and in the worst-case results in the creation of zones with such a low oxygen content (hypoxic) in water that animals cannot survive in this habitat.

One of the prime examples of a large hypoxic zone is the Gulf of Mexico. The Gulf has become a huge dead zone of over 8,000 square miles almost devoid of marine life due to fertilizer and pesticide runoff from the Corn Belt along the Upper Mississippi River. In fact, the Environmental Protection Agency concluded in one of its National Water Quality Inventories that agriculture pollutes at least 48 percent of rivers and 41 percent of lakes in the United States.

But all those excessive fertilizers and pesticides do not only change the chemistry of surface water, but they also leak into the groundwater and drinking wells. By silently contaminating our drinking water supplies, they make their way into our bodies and negatively affect our health in the long term.

According to the Intergovernmental Panel on Climate Change, agriculture is the largest emitter of greenhouse gases other than carbon dioxide. A big part of these emissions comes from large cattle farms and processes connected with altered nitrogen cycle in soils, which is affected by the overuse (or perhaps even misuse) of nitrogen-rich fertilizers in modern agriculture.

Destroys the overall soil’s degradation and erosion – The use of chemical fertilizers in monoculture farming also destroys the soil’s health. When the crops are harvested, there remains no natural protection for the soil from erosion by wind or rain. Also, the topsoil does not become replenished, mainly because of erosions.

All of these combined further degrade the soil, making it unusable for agriculture. It might also lead some people to clearing forests to acquire new agricultural lands, starting the damaging cycle all over again.

The water is pumped from rivers, lakes, and water reservoirs at high rates, depleting the aquatic resources. It also means the water resources will, in turn, be affected by the inorganic chemicals being pumped into the crops and soil by the farmers.

Uses a lot of fossil fuel energy – When selling the crops, sorting, packaging, and transporting them requires a substantial amount of fossil fuel energy. The energy used the chemical fertilizers and pesticides and other industrialized methods of producing such foods, play a considerable role in contributing to environmental pollution and climate change. It also continues to jeopardize the environment for future generations.

There won’t be any outcome if we simply sit and crib about the problems associated with monoculture farming. Solutions like polyculture, crop rotations, biotech crops might solve some issues, but again, there are some pros and cons related to them also. Researchers state that the trouble connected to monoculture farming is far more complex and grave to solve.