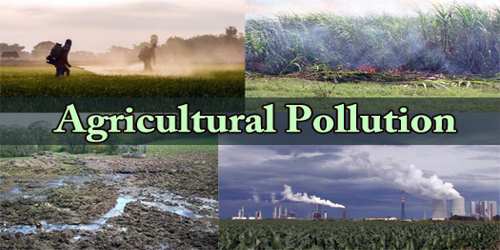 Agricultural Pollution can be defined as the degradation or contamination of the environment through abiotic and biotic byproducts of farming. The pollution may come from a variety of sources, ranging from point source water pollution (from a single discharge point) to more diffuse, landscape-level causes, also known as non-point source pollution. Management practices play a crucial role in the amount and impact of these pollutants. Management techniques range from animal management and housing to the spread of pesticides and fertilizers in global agricultural practices.

For thousands of years, agriculture was a natural process that did not harm the land it was done on. In fact, farmers were able to pass down their land for many generations and it would still be fertile as ever. However, modern agricultural practices have started the process of agricultural pollution. This process causes the degradation of the ecosystem, land, and environment due to the modern-day by-products of agriculture.

However, due to the optimization of yields over time through the excessive use of fertilizers and pesticides, agricultural pollution became a significant problem to the environment.

Pesticides and Fertilizers: To begin with, the earliest source of pollution has been pesticides and fertilizers. Modern-day pesticides & fertilizers have to deal with the local pests that have existed for hundreds of years along with the new invasive species. And so, they are laden with chemicals that are not found in nature.

Once they have been sprayed, it does not disappear completely. Some of it mixes with the water and seeps into the ground. The rest of is absorbed by the plant itself. As a result, the local streams that are supplied water from the ground become contaminated, as do the animals that eat these crops and plants.

Contaminated Water: Contaminated water used for irrigation is one further source of pollution. Much of the water we use comes from groundwater reservoirs, canals, and through the rains. While plenty of it is clean and pure water, other sources are polluted with organic compounds and heavy metals. This happens due to the disposal of industrial and agricultural waste in local bodies of water.

As a result, the crops are exposed to water which has small amounts of mercury, arsenic, lead, and cadmium dissolved in it. The process of agricultural pollution becomes harder to fight when such water poisons livestock and causes crop failure.

Soil Erosion and Sedimentation: Further problems are caused by soil erosion and sedimentation. The soil is comprised of many layers and it is only the topmost layer that can support farming or grazing. Due to inefficient farming practices, this soil is left open for erosion and leads to declining fertility each year. Whether eroded by water or wind, all this soil has to be deposited somewhere or the other.

The resulting sedimentation causes the soil to build up in areas such as rivers, streams, ditches, and surrounding fields. And so, the process of agricultural pollution prevents the natural movement of water, aquatic animals, and nutrients to other fertile areas.

Livestock: In the olden days, farmers would keep as much livestock as their land could support. The cattle, sheep, pigs, chickens, and other animals were fed natural diets, which was supplemented by the waste left over from the crops. As a result, the animals contributed to keeping the farm healthy as well.

As of now, livestock is grown in cramped conditions where it is fed unnatural diets and sent to slaughterhouses on a regular basis. As a result, they add to the process of agricultural pollution by way of emissions.

Pests and Weeds: Growing exotic crops and reducing the natural species in a certain area has become the norm for agriculture. However, it is simply adding to the process of agricultural pollution. With the arrival of new crops, the native population has to deal with new diseases, pests, and weeds that it is not capable of fighting.

Greenhouse gases from fecal waste: The United Nations Food and Agriculture Organization (FAO) predicted that 18% of anthropogenic greenhouse gases come directly or indirectly from the world’s livestock. This report also suggested that the emissions from livestock were greater than that of the transportation sector. While livestock do currently play a role in producing greenhouse gas emissions, the estimates have been argued to be a misrepresentation. While the FAO used a life cycle assessment of animal agriculture (i.e. all aspects including emissions from growing crops for feed, transportation to slaughter, etc.), they did not apply the same assessment for the transportation sector.

A PNAS model showed that even if animals were completely removed from U.S. agriculture and diets, U.S. GHG emissions would be decreased by 2.6% only (or 28% of agricultural GHG emissions). This is because of the need to replace animal manures by fertilizers and to replace also other animal coproducts, and because livestock now use human-inedible food and fiber processing byproducts. Moreover, people would suffer from a greater number of deficiencies in essential nutrients although they would get a greater excess of energy, possibly leading to greater obesity.

As a result, the invasive species destroy the local vegetation and wildlife, altering the ecosystem permanently. This is especially the case with Genetically Modified Foods, which create plant and animal species that can wipe out the existing species in a matter of years.

There are severe effects of agricultural pollution on human health. Through the excessive use of fertilizer and pesticides, harmful chemicals can reach our groundwater. Thus, in higher amounts and in contaminated regions, drinking tap water can lead to serious health conditions. Moreover, agricultural pollutions can also cause the contamination of rivers and lakes. Taking a bath in a contaminated lake can also cause health problems.

Eutrophication: An excessive use of fertilizers and pesticides leads to the eutrophication of rivers and lakes, meaning that the production of algae is supported. This can lead to a change in the environmental conditions for animals and plants which may affect the aquatic system in an adverse manner.

Decrease in crop yields: Through the excessive use of fertilizers and pesticides, farmers are able to produce large crop yields. However, the positive effect of these substances only lasts for a certain time since the soil is likely to suffer from the excessive use of these elements. In the long run, crop yields are likely to be reduced due to the fact that the soil will no longer have optimal characteristics for crop production due to agricultural pollution.

Soil pollution: Some chemicals which are part of pesticides can cause long-lasting damage to the soil. This can lead to decrease infertility of the soil. Thus, many areas of land which are currently used for farming purposes may not be suitable for it in the future anymore. Therefore, agricultural pollution can also lead to soil pollution.

Destruction of biodiversity: The use of pesticides in agriculture can kill many insects and other small animals which in turn can lead to a reduction in biodiversity. An ecosystem is a quite sensitive organism. Only small changes in the natural ecosystem can cause big effects.

Water pollution: Water pollution is another big problem which is caused by agricultural pollution. Through the excessive use of fertilizers and pesticides, many harmful substances will reach our lakes, rivers, and eventually also the groundwater. This will lead to adverse effects on plants, animals, and also on humans since we need clean drinking water to survive and to stay healthy.

Effects on animals: There are also adverse effects on animals from agricultural pollution. Since animals consume part of the crop yield or other parts of plants, they are heavily affected by pesticides and can even die from the consumption of contaminated crops.

Effects on plants: Agricultural pollution can become a problem for parts of the local plants since invasive species could impact the population of native species in an adverse way which in turn can change the dynamics of the whole ecosystem.

Effects on aquatic life: There is also an adverse effect on the aquatic system from agricultural pollution. Since the excessive use of fertilizer can contaminate rivers with an excessive supply of nitrates and phosphates, the production of algae can be enhanced. Thus, the oxygen levels are likely to decline which can cause the death of fishes and other water animals.

In order to prevent agricultural pollution, quarantine and extensive research on the organism’s potential efficacy and ecological impacts are required prior to the introduction. If approved, attempts are made to colonize and disperse the bio-control agent inappropriate agricultural settings. Continual evaluations on their efficacy are conducted.