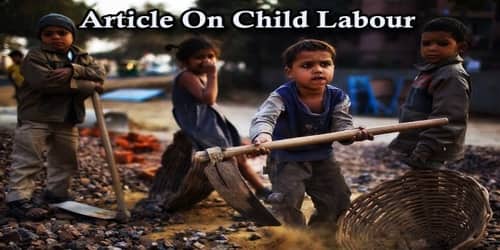 The term “child labour” is often defined as work that deprives children of their childhood, their potential and their dignity, and that is harmful to physical and mental development. It refers to work that:

Child labour has existed to varying extents throughout history. During the 19th and early 20th centuries, many children aged 5-14 from poorer families worked in Western nations and their colonies alike. These children mainly worked in agriculture, home-based assembly operations, factories, mining, and services such as news boys some worked night shifts lasting 12 hours. With the rise of household income, availability of schools and passage of child labour laws, the incidence rates of child labour fell.

Child labourers have to toil long hours to eke out a living for themselves and support their families. Exploitation becomes a way of life for them and becomes very harmful to their physical and mental development. They are forced to inhabit an adult world, shoulder adult responsibilities, and suffer extreme exploitation. Despite legislation banning child labour, it has not been possible to completely stop the practice of hiring children as labour across the world.

Globally the incidence of child labour decreased from 25% to 10% between 1960 and 2003, according to the World Bank. Nevertheless, the total number of child labourers remains high, with UNICEF and International Labour Organization (ILO) acknowledging an estimated 168 million children aged 5-17 worldwide were involved in child labour in 2013.

Causes of Child Labour: Poverty, social inequality and lack of education are among is the main cause of child labour. According to a UNICEF report, in rural and impoverished parts of the world, children have no real and meaningful alternative as schools and teachers are not available. Many communities, particularly rural areas do not have adequate school facilities, even the availability and quality of schools is very low.

# Child labour in Bangladesh is common, with 4.8 million or 12.6% of children aged 5 to 14 in the workforce. Out of the child labourers engaged in the workforce, 83% are employed in rural areas and 17% are employed in urban areas. Child labour can be found in agriculture, poultry breeding, fish processing, the garment sector and the leather industry, as well as in shoe production. Children are involved in jute processing, the production of candles, soap and furniture. They work in the salt industry, the production of asbestos, bitumen, tiles and shipbreaking. Despite the prevalence of child labour in Bangladesh, there has been an increase in legislation against child labour. Bangladesh has ratified, the ILO (International Labour Organization) Worst Forms of Child Labour Convention (C182). In addition, the country also ratified the UN Convention on the Rights of the Child.

Consequences of Child Labour: Child labour inflicts damage to a child’s physical and mental health. A child labourer has no basic rights to education, development, and freedom. Children employed as labourers work in unsafe environments where there is a constant danger of fatal accidents. They are forced to lead a life of poverty, illiteracy, and deprivation. They are required to perform gruelling and physically demanding tasks and in return receive only meagre wages. Poor working conditions cause severe health problems to such children. A child labourer not just suffers physical and mental torture but also becomes mentally and emotionally mature too fast which is never a good sign.

According to Thomas DeGregori, an economics professor at the University of Houston, in an article published by the Cato Institute, a libertarian think-tank operating in Washington D.C., “it is clear that technological and economic change are vital ingredients in getting children out of the workplace and into schools. Then they can grow to become productive adults and live longer healthier lives. However, in poor countries like Bangladesh, working children are essential for survival in many families, as they were in our own heritage until the late 19th century. So, while they struggle to end child labour is necessary, getting there often requires taking different routes and, sadly, there are many political obstacles.

Conclusion: Collective efforts are needed on the part of society and the government to put an end to the practice of child labour. In fact, every citizen should take a pledge to never employ child labourer, rather discourage others too from doing so. We should create awareness amongst people employing child labourers and the parents sending their children to work. We need to provide our children with a happy childhood where they are able to enjoy the best period of their lives with a merry and carefree attitude.