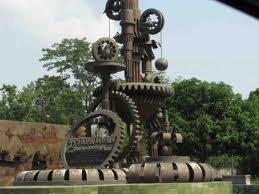 Assignment on The Tourist Spots in Rajshahi

Rajshahi division is in the northern part of Bangladesh has an area of 34513 sq. km and a population of 29.99 million. There are 16 districts and 57 municipalities under Rajshahi. It is famous for archeological and historical sites.

Rajshahi town is situated besides the river Padma. In monsoon the great Padma is in full spate with its tides and waves whereas in winter it dwindles and you will feel the desert by the side of river. Rajshahi Division is famous for archeological and historical places like Mohastnangor, Paharpur Buddhist Monastery, Kantajee’s Temple, Ramshagar Dighi, Choto Sona Masjid, and Shopnopuri etc. You can visit Rajshahi University. It’s a very well planed University and you can visit The Shahid Smriti Sangraha Shala in the University, you can see the documents and photography’s from the language movement of 1952 to the liberation was 1972. You can also visit Borendra Research Museum. There you will find the ancient elements of Paharpur, Mohasthangar and Mohenjodaro.

The beautiful Ramshagor Dighi (Lake) was dug in 17th Century by Maharaja Ram Nath to solve the water problem. This is now one of the historical places as well as a tourist spot also. Shopnopuri is one of the most beautiful artificial tourist spot in North Bengal. You can go there either from Hili or from Dinajpur. There you can enjoy your full day watching this artificial beauty.

You can spend night also In Shoponopuri rest house but for that you will have to book in advance. It is an idle Picnic spot also where lots of picnic parties come every year.

Puthia has the largest number of historically important Hindu structures in Bangladesh. The most amazing of the village’s monuments is the Govinda Temple, which was erected between 1823 and

1895 by one of the maharanis of the Puthia estate. It’s a large square structure crowned by a set of miniature ornamental towers. It’s covered by incredibly intricate designs in terracotta depicting scenes from Hindu epics, which give it the appearance of having been draped by a huge red oriental carpet.

Mohasthangarh is one of the main attractions in north Bengal. It was the capital of Kingdom of the Mourjo, the Gupta and the Sen Dynasty. This is the ancient archeological and historical which was, established in 2500 BC. It is the oldest archaeological site of Bangladesh is on the western bank of river Karatoa 18 km. north of Bogra town beside Bogra-Rangpur Road. The spectacular site is an imposing landmark in the area having a fortified, oblong enclosure measuring 5000 ft. by 4500 ft. with an average height of 15 ft. from the surrounding paddy fields. Beyond the fortified area, other ancient ruins fan out within a semicircle of about five miles radius. Several isolated mounds, the local names of which are Govinda Bhita Temple, Khodai Pathar Mound, Mankalir Kunda, Parasuramer Bedi, Jiyat Kunda etc. surround the fortified city.

Kantajee’s Temple is in Dinajpur district. It is the most ornate among the late medieval temples of Bangladesh is the Kantajee’s temple near Dinajpur town, which was established in the year 1722 by Ram Nath, son of Maharaja Pran Nath. The temple, a 51′ square three storied edifice, rests on a slightly curved raised plinth of sandstone blocks, believed to have been quarried from the ruins of the ancient city of Bangarh near Gangharampur in West Bengal. It was originally a navaratna temple, crowned with four richly ornamental corner towers on two stores and a central one over the third stored.

Unfortunately these ornate towers collapsed during an earthquake at the end of the 19th century. ln spite of this, the monument rightly claims to bathe finest extant example of its type in brick and

terracotta, built by Bengali artisans. The central cells is surrounded on all sides by a covered verandah, each pierced by three entrances, which are separated by equally ornate dwarf brick pillars, Corresponding to the three delicately cusped entrances of the balcony, the sanctum has also three richly decorated arched openings on each face.

Paharpur Buddhist Monastery is another tourist attraction of North Bengal. Paharpur is a small village 5 km. west of Jamalganj in the greater Rajshahi district. You can go to Paharpur from Jaipur district. Its only 10 km from Jaipur.

King Dharma Pal established Paharpur Buddhist Monastery in 7th century, which is the most important and the largest known monastery south of the Himalayas, has been excavated. The main Mandir is in the center of this Monastery. This 7th century archaeological find covers approximately an area of 27 acres of land. The entire establishment, occupying a quadrangular court, measuring more than 900 ft. externally on each side, has high enclosure- walls about 16 ft. in thickness and from 12 ft. to 15 ft. height. With elaborate gateway complex on the north, there are 45 cells on the north and 44 in each of the other three sides with a total number of 177 rooms. The architecture of the pyramidal cruciform temple is profoundly influenced by those of South-East Asia, especially Myanmar and Java.

A small site-Museum built in 1956-57 houses the representative collection of objects recovered from the area, where you can see the statues of Buddha and Vishnu. The excavated findings have also been preserved at the Varendra Research Museum at Rajshahi. The antiquities of the museum include terracotta plaques, images of different gods and goddesses, potteries, coins, inscriptions, ornamental bricks and other minor clay objects.

A visit to Mahasthangarh site museum will open up for you wide variety of antiquities, ranging from terracotta objects to gold ornaments and coins recovered from the site. Now it is one of the major tourist spots maintained by Bangladesh archeological Department. You can go to Mohasthanagar from Bogra town, 10 km. away. Don’t forget to visit Mohasthangar museum while visiting Mohasthangar. Mohasthan Buddhist Stambho is another attraction for the tourists; it is locally called as Behula’s Basar. the reign of Sultan Alauddin Husain Shah (1493-1519). Originally it was roofed over with 15 gold-gilded domes including the 3 Chauchala domes in the middle row, from which it derives its curious name.