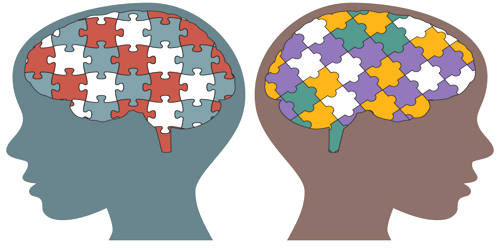 Autism is a neurodevelopment disorder. It is a complicated condition that includes problems with communication and behavior. It is characterized by impaired social interaction, verbal and non-verbal communication, and restricted and repetitive behavior. Indicators of autism usually appear by age 2 or 3. Symptoms can include an intense focus on one item, unresponsiveness, lack of understanding social cues, repetitive movements, or self-abusive behavior like head-banging. Some associated development delays can appear even earlier, and often, it can be diagnosed as early as 18 months. Exactly why autism happens isn’t clear. It can be a minor problem or a disability that needs full-time care in a special facility. It could stem from problems in parts of your brain that interpret sensory input and process language.

People with autism have trouble with communication. Parents usually notice signs of autism in the first two years of their child’s life. These signs often develop gradually. They have trouble understanding what other people think and feel. In some cases, children with autism reach their developmental milestones at a normal pace and then lose speech and social skills. Other possible symptoms include learning to speak relatively late, not playing interactively with other children, avoidance of eye contact, lack of empathy, and social withdrawal. This makes it hard for them to express themselves, either with words or through gestures, facial expressions, and touch. Usually, autism occurs before age three. The learning, thinking, and problem-solving abilities of people with ASD can range from gifted to severely challenged. Their skills might develop unevenly. For example, they could have trouble communicating but be unusually good at art, music, math, or memory.

While autism is highly heritable, researchers suspect both environmental and genetic factors as causes. In some rare cases, birth defects are responsible for autism. A child with an older parent has a higher risk of autism. Autistic children mainly display many forms of repetitive or restricted behavior, and there some other symptoms like superior skills in perception and attention. A diagnosis of autism now includes several conditions that used to be diagnosed separately: autistic disorder, pervasive developmental disorder not otherwise specified, and Asperger syndrome. Family income, lifestyle, or educational level doesn’t affect a child’s risk of autism. Diagnosing can be difficult since there is no medical test, like a blood test, to diagnose the disorders.  Treating children with autism is mostly behavioral. Medication can be introduced when behavioral treatment fails. However, research shows that early intervention treatment services can improve a child’s development.