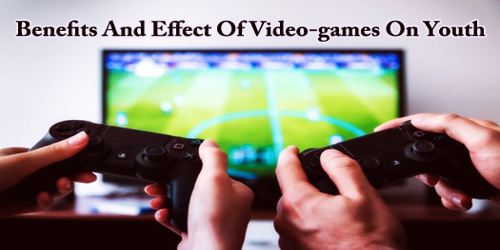 Benefits And Effect Of Video-games On Youth

Introduction: Video games are becoming an incredibly popular and pervasive form of entertainment for young generation. These games affect the children in both positive and negative ways. The technology based games help the children to improve their physical, mental neurological health, and educational skills. However, it has always been debatable whether the parents should allow their children to play video games or they need to stop them. The video games are well known for its addictive and violent properties. Although, these games were originally designed as recreational programs for enjoyment but now these have become the most addictive activities among young children and adolescents, which directly or indirectly affect their growth and development.

Before the revolution of computing technologies, youth were limited to playing in the yard and participating in various activities like sports or games that involve being a socially integrated person. Nonetheless, recent decades have entirely subverted the conventional paradigm due to the rapid progression of technologies. Having roots in World War II, computers had been seriously upgraded since the first example of digital machines that allowed modern people to employ them with different purposes. Considering video games as an effective means of escapism, it is essential to underline that similar variants of addiction are controversial and do not enable scholars to attribute this category to either positive or negative aftermath of the digital epoch.

Physical and Mental Health – Improvement the video games have been proven as good for some health related issues. The researchers had studied that video games are therapeutic for chronic illnesses such as Autism, Depression, and Parkinson’s disease. Several studies have proved that these video games have helped such children to enlighten them emotionally, improving their quality of life, and gave them a ‘fighting spirit’. The parents usually tell their children to reduce sitting in front of television or computer screens to prevent eyesight loss, but this is not always true. Video games are helpful in improving vision. Dr. Daphne Maurer from Ontario’s McMaster University made a surprising discovery “suggesting that people born with cataracts could improve their eyesight by playing Medal of Honor, the “first-person shooter” video game.

Neurological Health Benefits – Video games help to improve motor skills, cognitive functions, multitasking activities, quick thinking and spatial judgment skills. In addition, the children learn to coordinate their body movement along with mental exercise while playing. Video games increase hand-eye coordination, fine motor skills and spatial reasoning. For example, in shooter games, the player keeps track of their position, direction, speed, aim, results and more. The brain processes all this information and then coordinates with the hands since all actions are done through the controller or keyboard. These skills can be applied to real world situations. A general surgeon at Florida Hospital, Dr. Rosser (2012) mentioned in his research studies that surgeons can improve their surgical techniques by “warming up” doing few minutes of video games play before scrubbing and performing surgeries.

Educational Benefits – Youth’s nowadays spend most of their free time in front of computer screens, television and remote control devices, and it is obvious for parents to worry that their children are just scrambling their brains with game play. But it turns out that time spent playing video games can be educational. This kind of growing field of activities is known as “edutainment” or education while entertaining. There are many word games, problem solving tasks and building blocks games for kids, which require their attention to complete tasks and reach the next level. This helps them to learn valuable skills like math, language, science, critical thinking, accuracy, problem solving, and ability to follow instructions. In addition to it, some games help the children to be creative, socially active and collaborative skills while they interact with other players. Cognitive neuroscientists at the University of Rochester, New York. Discovered that games that need some sort of decision making, act as a sort of simulator for real life to make important decisions quickly and effectively. Through games, they can excellently practice the choices of decision-making and can be able to apply same in real life.

Effects of Video Games: On the one hand, some computer games are influencing youth in a negative perspective as they are promoting a violent, aggressive behavior, contribute to children’s antisocial attitude, and negatively affect human health, whereas on the other hand, many video games can be useful in terms of learning, relaxing, and developing online communication.

Firstly, the majority of video games can be dangerous regarding the message of violence they are conveying to still developing minds of youth. When in the late 1990s, society was evaluated on the subject of attitude towards the first popular computer games, governments were astonished that almost all people became fond of such a type of pastime. Nevertheless, scholars appeared to be confused by such unexpected statistics and were not certain how to react to the abrupt success of video games. The vast majority of laboratory-based experimental studies have revealed that violent media exposure causes increased aggressive thoughts, angry feelings, physiologic arousal, hostile appraisals, aggressive behavior, and desensitization to violence and decreases pro-social behavior and empathy.

Educational games were more popular for some of the youth being asked, but throughout all the age groups, violent video games never lost their superior power in the gaming industry. An 18-year-old gunman who killed nine people in July 2016 in Munich, Germany, was a fan of first-person shooter video games, according to reports. This news made the parents worry about their children and if they learn anything violent from video games. Another similar incident happened in February, 2018 when Nikolas Jacob Cruz, a former student at Marjory Stoneman Douglas High School in Parkland, Florida, was accused of murdering 17 people in a shooting rampage. Donald Trump, the president of USA stated on this incident, “the level of violence on video games is really shaping young people’s thoughts.” The games like “Manhunt,” “Thrill Kill,” “Gears of War”, “Grand Theft Auto”, “PUBG”. and “Mortal Kombat” are some of the examples of violent games which include shooting, stabbing, breaking traffic rules and buying weapons. These games are responsible for increasing criminal activities by teenagers and some of the adults.

Video games can also cause unexpected deaths. The players are pre-occupied with their game content and lead to self-destruction and may harm other people in their surroundings. A very recent example of such a video game is ‘Pokernon Go’ which resulted in so many deaths and car accidents. Mcconnel and Faccio (February 2018) from Purdue University’s Krannert School of Management documented that the game caused “a disproportionate increase in vehicular crashes and associated vehicular damage, personal injuries, and fatalities in the vicinity of locations, called PokoStops, where users can play the game while driving.” According to American Academy of Pediatrics (July 2016), violent media set a poor example for kids. Video games, the academy noted, “should not use human or other living targets or award points for killing because this teaches children to associate pleasure and success with their ability to cause pain and suffering to others.”

Video games, as one of the most beneficial and simple methods of escapism, are widening the divide between the members of society. Youth should learn how to communicate with one another, but after years spent in the digital realm, adolescents are no longer able to cooperate in real-life processes successfully enough to be left without adults’ assistance. Every factor which is participating in the functioning of a human organism, be it some organ or a muscle, can atrophy as a result of non-use. Language is not an exception, so the lack of communication may influence a child’s future in a negative way.

Conclusion: It is necessary to state that the abundance of comfort and simplification factors like devices that combine all functions in a single gadget are significantly contributing to the deficiency of receiving enough fresh air and a shortage of regular strolls. Nonetheless, as the issue of video games can be envisioned as an ambivalent phenomenon, there is a need to examine the positive consequences of spending time on computers in general and video games in particular.